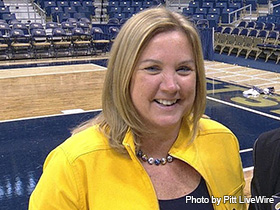 Born in Pennsylvania, in 1966, Suzie McConnell Serio has achieved in basketball all of her life. She has gone from player to coach in the Women's National Basketball Association. As a Penn State Alumna, she has won two Olympic medals. She has set many records in as a player and coach in all levels of the sport. She was a second round draft pick in the WNBA by the Cleveland Rockers. Her life has been all about basketball; from player to coach her many records show her expertise in the sport.

Suzie McConnell was born in Pittsburgh, Pennsylvania on July 29, 1966. She grew up on Dunster Street in the Brookline neighborhood of the city. She was the daughter of Tom and Sue McConnell who had seven other children. Her eldest brother Tom got the family into basketball; later six of the eight siblings went on to play basketball and had careers as coaches. In grade school, at Our Lady of Loreto, her basketball team won the state championship with an undefeated record in 1980. During 1983, she played in the World Cup games and led her team to a championship and was named Most Valuable Player in the tournament. Suzie McConnell went on to Seton-LaSalle High School, where she again showed her talent in the sport. In 1984, Kathy, her sister, accompanied Suzie McConnell to win the PIAA State Championship with a 35-1 record. Her childhood showed potential for the player that she became.

After she graduated, she was one of the top recruited players in the nation after the championship PIAA win. She ended up going to The Pennsylvania State University to continue her basketball career. It soon became clear why colleges wanted her on their team. She set single game records for most points, and best field percentage at 70.7 percent making 41 out of 58 shots. A freshman in college setting school records was just one of her accomplishments. She was named the Atlantic 10 Conference's Freshman of the Year. The honor was due to the fact that she averaged 12.6 points-per-game and 9.7 assists per game. As her college career progressed, she continued to set records and her statistics only got better. McConnell led the nation with 355 assists. In her senior year, she set had an average of 14.9 points-per-game and 10.2 assists per game in 128 contests. She had 1307 assists by the time she graduated, an all time career record that is still standing. She was named a First Team Kodak All-American setting an all time school record at 507 steals. This incredible college career led her onto a professional career.

Post-graduation, Suzie McConnell was chosen to be on the 1988 United States Olympic women's basketball team. Her team took brought home a gold medal. She was a leader for the team in three point field goals, three point field goal percentage, assists, free throw percentage and points. She was also a part of the 1992 Olympic team which won the bronze medal. Suzie McConnell then got married to Pete Serio. She changed her name to Suzie McConnell Serio and gave birth to four kids while taking a six year break from competitive basketball. Her kids are Peter, Jordan, Mandy and Madison.

During this time she began coaching at Oakland Catholic High School. She coached there for 13 years and won three state championships with two other instances ending the season as runner-up. She returned from her break and started competing again in 1998 while still coaching at the high school. Suzie McConnell Serio was a second round draft pick for the WNBA. In 1998, she joined the Cleveland Rockers as a point guard and as a rookie she became WNBA Newcomer of the Year. She had a three season long career and in this time, she won two Kim Perrot Sportsmanship Awards. She retired her competitive with an average of 6.4 points per game and 4.6 assists per game in 81 contests. As she ended her high school coaching career she took on a bigger coaching job.

In 2003, she was presented an offer to coach the WNBA Minnesota Lynx, which she accepted. She took the Lynx to the WNBA playoffs for the first time in the team's five year long history and that same year set coaching records for the franchise. She helped the Minnesota Lynx reach a level of winnings that they have never had. She left the team in 2006 and left Minnesota to come back to Pennsylvania. Serio has served as the head coach of Duquesne University's women's basketball team since 2007, and in 2008 was inducted into the Women's Basketball Hall of Fame.