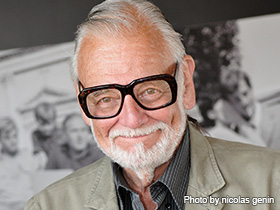 Master of the Zombie movie, director George A. Romero has filmed all of his Dead movies in and around Pittsburgh.

George A. Romero, son of George M. and Ann Romero, was born on 1940 in New York City. He attended Suffield Academy and later Carnegie Mellon University. In 1981, he married Christine Forrest. Romero is best known for zombie films with his 'Dead' saga. Consisting of Night of the Living Dead, Dawn of the Dead, Day of the Dead, Land of the Dead, and Diary of the Dead, the series is one of the most popular horror franchises in Hollywood history. All five of the movies were filmed in and around Pittsburgh, Pennsylvania, where Romero currently lives with his family.

George Andrew Romero was born in New York City on February 4, 1940. The son of George M. and Ann Romero, he spent his childhood in the Bronx neighborhood of the city. After begging his parents, Romero received an 8mm camera in 1954 for his fourteenth birthday. In the book The Cinema of George Romero: Knight of the Living Dead, Tony Williams recounts the result of this gift; "[Romero was]...arrested for throwing a burning dummy from a roof while shooting...Man From Meteor." After Romero's arrest, he was sent to Suffield Academy in Connecticut to continue his education. Romero graduated from Suffield Academy and went on to attend Carnegie Mellon University in Pittsburgh, Pennsylvania. While there, he studied art, design, and drama and graduated in 1960.

From 1960 to 1968, Romero worked on short-films that, while solidifying the filmmaking techniques he would use later, did not meet with great commercial success. In 1968, Romero and several close friends formed Image Ten Productions and created their first feature length film, Night of the Living Dead. The film centers on a group of people trapped in a rural farmhouse. For a reason never truly explained in the film, the recently dead rise from their graves to feast on the flesh of the living. The only way to stop the horrible monsters, which are never referred to as zombies in the film, is to destroy the brain. This concept is one of the horror staples that Romero helped create. While popular in several European countries (most notably Italy), the zombie sub-division of horror films was not well known in the United States until Night of the Living Dead. Other now standard aspects of the genre, such as zombies eating human flesh and zombie bites turning people into undead monsters, were first popularized by Romero.

After the success of Night of the Living Dead, Romero made several less popular films and television specials. During the filming of Season of the Witch in 1973, Romero met his future wife, Christine Forrest. It was not until 1978 that Romero was once again in the limelight. Romero returned to the zombie genre with Dawn of the Dead, a sequel to Night of the Living Dead. While it did not share any characters or locations with the first film, Dawn of the Dead still dealt with the idea of the undead trying to feast on the living. Instead of being trapped in a farmhouse, this time the survivors sought refuge in a mall outside of Pittsburgh, Pennsylvania. Romero took what could have been a simple sequel to a popular film and gave it a powerful message. After coming back from the dead, the legions of zombies begin to congregate at the mall. The film was a satire on the commercial world we live in and greed is what leads to the ultimate demise of many of the film's characters. In addition to receiving very positive reviews the film was a major financial success. According to the Internet Movie Database, the film only cost $1.5 million and was able to make $40 million at the United States box office alone.

Once again, Romero took a break from the zombie genre. In 1981, he directed the film Nightriders, starring Ed Harris. That same year he and Christine Forrest were married. A year later Romero directed his most popular non-zombie film, Creepshow. Based on a book by master of horror Stephen King, the film was a moderate success. In 1985, Romero directed what, at the time, was supposed to be the last film in the 'Dead' trilogy. Day of the Dead follows the story of a group of people living in an underground military base after the zombie outbreak depicted in the first two 'Dead' films. The film was panned by critics and failed at the box office. Romero's films following Day of the Dead were all met with either moderate ticket sales or complete failure.

After his film Bruiser failed terribly in 2000, many people believed that Romero would retire from filmmaking. For five years the once-great horror director released nothing. Then in 2005, he returned to the genre he created, the zombie film. Part four of the 'Dead' saga, Land of the Dead, took place in a post-apocalyptic Pittsburgh. Romero once again touched upon social issues in order to give a meaningful sub-text to what could have been just a horror film. The movie was well received by both critics and viewers. In his review for the industry paper Variety, Justin Chang called the film, "A tour de force of not only independent filmmaking but independent thinking, rigorously worked out on all craft and technical levels yet enlivened by its twisted engagement with the real world." The fan and critical reaction to the film revitalized Romero. His next film, Diary of the Dead, was written in Pittsburgh, where Romero still lives with his family.