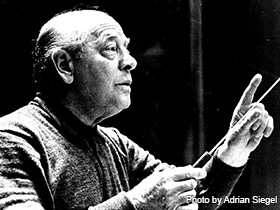 Born in 1899, Eugene Ormandy was among the foremost American conductors of the 20th century. Ormandy was a violin virtuoso in Europe at age 17, and he moved to the U.S. for a solo career in 1921. However, the contract for a solo tour he had been promised never came through, and he began playing in an orchestra, eventually becoming a conductor, first of the Capitol Theatre orchestra, then of a radio orchestra, the the Minneapolis Symphony, and the Philadelphia Orchestra. His tenure in Philadelphia lasted nearly a half century, unprecedented by American conductors in the 20th century. Ormandy's health declined late in life, and he died of pneumonia in 1985, five years after retiring from conducting.

Eugene Ormandy was born Jenő Blau in Budapest, Hungary, in 1899. He was named after the great Hungarian violinist Dr. Jenő Hubay, who would eventually become Ormandy's violin teacher, having a profound effect on Ormandy's future orchestras. He later took the name Eugene Ormandy shortly after moving to the U.S. in 1921. Ormandy began studying violin at age three with his father Benjamin Blau, a dentist and amateur violinist. At age five, Ormandy was accepted as a student at Hungary's Royal Music Academy (now the Franz Liszt Academy of Music) in Budapest.

At the Academy, Ormandy began violin studies with Hubay at age nine. Hubay, a former pupil of the famed Joseph Joachim, is acclaimed as being one of the greatest violinists of all time. Also while at the Academy, Ormandy studied composition with Zoltán Kodály and with Leó Weiner. He graduated with a diploma at age 14 from the Academy, and earned a degree in philosophy from Budapest University in 1920. He established himself at a young age as an international virtuoso, touring in Germany and Hungary with the German-based Bluthner Orchestra in 1917. Touring stopped during World War I; however, he resumed tours of Austria and France in 1920.

While on tour in 1920, Ormandy met two American concert promotors who promised they could sign him to a 300 concert tour in America that would earn him $30,000. He eagerly signed the contract, but when he arrived in New York, New York, in November 1921 he quickly found that the alleged "tour" he had been promised never got off the ground. He was jobless and alone in a country where he didn't speak the language. Fortunately, he was able to find a job playing violin in Capitol Theatre Orchestra for $60 a week. Within a week of joining the orchestra he became the concert master. He gradually learned English, and in 1924, he made his conducting debut with the orchestra when its conductor Erno Rapee became suddenly ill the day of a performance. He then stood in as conductor of the concert that included a selection from Tchaikovsky's Symphony No. 4. When Rapee moved to conduct the Roxy Theatre Orchestra in 1926, Ormandy became the new conductor of the Capitol Theatre Orchestra.

While he was a conductor there, Arthur Judson heard him at a Carnegie Hall dance performance with Anna Duncan. Judson was at the time a manager of three of the most prominent American orchestras of the day: the New York Philharmonic, the Cincinnati Orchestra, and the Philadelphia Orchestra. Judson was also the founder and primary shareholder of the radio station that later became CBS. He offered to manage Ormandy, impressed by his performance, and Ormandy accepted. He conducted the radio orchestra several years for the radio network. Judson managed to find him jobs subbing in major orchestras, and he eventually landed Ormandy a job subbing for Arturo Toscanini and the Philadelphia Orchestra at its summer venue during that time, Robin Hood Dell. His debut with the Philadelphia Orchestra, in which he conducted Beethoven Symphony No. 7, the Prelude to Debussy's Afternoon of a Faun, Stravinsky's Firebird Suite and parts of Mendelssohn's A Midsummer Night's Dream, a concert of notoriously difficult work, was so successful that he was offered a job the same night as conductor of the Minneapolis Symphony. Supposedly he boarded the next train for Minneapolis still in his concert attire.

While in Minnesota, Ormandy became a U.S. citizen, and married his first wife, Stephanie Goldner. He continued to guest conduct the Philadelphia Orchestra in the summer time, hoping to succeed conductor Leopold Stokowski, who was nearing retirement. He even turned down an offer to conduct the Radio City Music Hall Orchestra in hopes of succeeding Stokowski in Philadelphia. In 1936, Ormandy was appointed co-conductor alongside Stokowski, and in 1938, he took over as the sole music director of the orchestra. This was the beginning of his 44 year tenure as the conductor of the Philadelphia Orchestra.

As the Philadelphia Orchestra's long time conductor, Ormandy was able to develop what is known as the "Philadelphia Sound." This concept applies to the orchestra's string section, which Ormandy coached meticulessly. In following the Hungarian tradition of violin playing, which he originally learned from Joachim and Hubay, Ormandy insisted that his string players use a lot of bow pressure (as opposed to a quick bow with less pressure as in the Russian school) and a broad vibrato. Also, Ormandy switched from the method of "free bowing," which Toscanini had in place, in which the strings are bowed in different directions, to the more modern practice of "uniform bowing," in which all instruments in a section bow in the same direction. The unique sound of the Philadelphia Orchestra during his tenure there can also be attributed to the fact that after being there for several years, eventually the entire roster of the orchestra had changed and everyone in it had been hand-picked by Ormandy himself. Thus, the kinds of players that he wanted were there and this influenced the formation of the "Philadelphia Sound" as well.

Under Ormandy's leadership and guidance, the orchestra had an extensive touring and recording history, with many historical firsts. Their first trans-continental tour was made in 1949 to England. In January 1970, President Richard Nixon traveled to Philadelphia to present Ormandy the Presidential Medal of Freedom, the nation's highest civilian award. In 1973, the Philadelphia Orchestra became the first American orchestra to tour communist China in a tour of great critical acclaim. Ormandy's musical recordings range from Bach through the 20th century; however, he is most renowned for his programming of 19th century music that people easily recognized, such as Tchaikovsky and Bruckner. The latter is regarded as an expert. Under Ormandy, the orchestra also played the premieres of works by many 20th century composers including: Samuel Barber, Béla Bartók, Benjamin Britten, David Del Tredici, David Diamond, Gottfried von Einem, Ernst Krenek, Bohuslav Martinu, Gian-Carlo Menotti, Darius Milhaud, Krzysztof Penderecki, Vincent Persichetti, Sergei Prokofiev, Sergei Rachmaninoff, George Rochberg, Ned Rorem, William Schuman, Roger Sessions, Dmitrii Shostakovich, and Virgil Thomson. His recording of Carl Orff's Catulli Carmina won a 1967 Grammy Award.

Ormandy divorced his first wife, Stephanie Goldner, in 1947. He had two children in that marriage; however, both died in infancy from a blood disease. He re-married in 1950 to Margeret Hitsch, with whom he had no children and with whom he remained for the rest of his life. After several years of deteriorating health, he retired as conductor of the Philadelphia Orchestra. May 6, 1980 marked his last appearance as conductor of the orchestra, with a final concert at Carnegie Hall. He conducted the orchestra several times in his retirement, the last being January 10, 1984 in Carnegie Hall. Ormandy passed away on March 12, 1985. The cause of his death was pneumonia, a complication of a cardiac condition. He died in his apartment at the Barclay Hotel in Rittenhouse Square, Philadelphia.