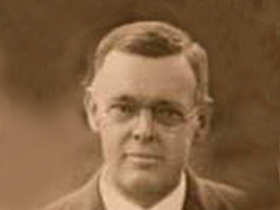 Architect Richardson Brognard Okie was the master of the Colonial Revival.

Richardson Brognard Okie's career as an architect in Philadelphia spanned nearly fifty years, much of that time in independent practice. Mr. Okie's achievements centered on the design of new homes and the renovation of existing homes in the "Colonial Revival" style. His clients were often prominent civic leaders and businessmen. In addition to private homes, Okie was responsible for important public projects such as the 1937 restoration of the Betsy Ross House and the recreation of William Penn's home known as Pennsbury Manor. Today, Okie is credited with having contributed greatly to a popular appreciation and understanding of early American domestic architecture.

Richardson Brognard Okie, Jr., the son of Dr. Richardson Brognard Okie and Clara Mikle Okie was born in Camden, New Jersey on June 26, 1875. After his mother's death, the family moved to Berwyn, Pennsylvania. Okie attended and graduated from the West Chester Normal School in Chester County. His education continued at his father's alma mater, Haverford College, but his desire to become an architect led him to spend his final two years at the University of Pennsylvania, graduating with a bachelor's degree in architecture with the class of 1897. Prior to graduation Okie worked for the well-known architect William L. Price, and in 1897 he was hired by Arthur S. Cochrane. In 1898, he joined forces with H. Louis Duhring and Carl Ziegler to form the firm of Duhring, Okie, & Ziegler. Their firm enjoyed a successful existence until 1917 when Okie went into practice for himself. For a short period, immediately prior to this death in 1945, the firm was known as Okie and Okie in acknowledgment of his son, Charles, also an architect, who joined his father in the business.

Mr. Okie must be regarded as one of this country's prominent domestic architects. His special interest was the "Colonial Revival" style, particularly as it is found in the farmhouses of southeastern Pennsylvania. Several recent books on domestic architecture have credited Mr. Okie's importance as an architect. In Everyday Architecture of the Mid-Atlantic (1997), authors Gabrielle Lanier and Bernard Herman credit Mr. Okie as one of several architects who "contributed tremendously to the Colonial Revival in the mid-Atlantic region by restoring, remodeling, and in some cases completely reworking earlier dwellings . . . . and who promoted popular awareness of and appreciation for early buildings."

In the 2002 book, The Main Line: Country Houses of Philadelphia's Storied Suburbs, William Morrison writes: "Acknowledged master of the Pennsylvania Colonial style, Okie was an adherent of traditional craftsmanship and in the use of handmade artifacts in his designs." In regard to the Barclay Farm of Rosemont which Okie restored and enlarged by adding several wings between 1927 and 1934, Morrison continues, "Authentic in detail and charming in appearance, Barclay Farm resembles more an entire Colonial village than a single family home."

In Stone Houses: Traditional Homes of Pennsylvania's Bucks County and Brandywine Valley (2005), Margaret Richie notes that Okie was at the forefront in promoting the Colonial Revival in the area. Two of his homes, are featured in the book, one of which, known as the Peaceable Farm in Solebury (Bucks County) was also featured as the cover story of the June 2009 issue of Architectural Digest. Peaceable Farm was not a renovation, but new construction, including a main house, a cottage, and several sheds or other out-buildings. This use of a complex of several buildings was typical of Mr. Okie's designs. Ms. Richie notes that Mr. Okie "has had a lasting impact on residential design in the region for the past six decades."

Mr. Okie's designs incorporated many of the features of colonial style into new building construction, the effect of which was to create a house or building that appears to be from a bygone era, yet which incorporates all of the modern conveniences. Mr. Okie's houses were often of fieldstone and wood construction. The fieldstone walls employed a "rubble" pattern of random appearance. Upstairs windows were often in the form of "wall dormers" which were set into the wall and interrupted the eave. The houses usually had multiple wings, massive stone chimneys, and a number of different roof-lines. Ms. Richie and others praise Mr. Okie's houses for their intimate scale and aesthetic qualities. The interiors usually had fine woodwork and plastered walls. Okie insisted on using hand-wrought hardware on doors and windows to give an authentic look and feel.

In 1930, at the height of his career, Mr. Okie wrote an introduction to a book by the Boston architect Eleanor Raymond. The book is titled Early Domestic Architecture of Pennsylvania and it consists of a large number of black and white photographs of colonial-era domestic buildings located between Harrisburg and Philadelphia. Ms. Raymond's intent was to record the domestic architectural traditions of colonial times, and the book is unique in its inclusion of not just houses, but also of the wood and fieldstone barns, mills, spring houses, and other out-buildings. It was most appropriate that Mr. Okie wrote the introduction since he was perhaps the foremost proponent of the Colonial Revival style as found in southeastern Pennsylvania. He greatly admired the qualities of these buildings, including, as he wrote in the introduction, "the good judgment and artistic sense which those who first located the houses and the various out-buildings used in selecting sites for them." He admired "the natural way they fit the ground" and their "keen sense of proportion." In regard to these colonists, he writes, "they knew exactly where to place their doors and windows." And, moreover, "it is a fact that the old buildings existing today are beautifully proportioned, even the simplest woodshed or spring house or bake oven having a charm of its own." Mr. Okie had high regard for the great skill of the carpenters and other craftsmen, whose work reflected quality and durability.

He was careful to place his buildings in an appropriate location. For example, on the estate of Ernst Behrend in Erie, Okie created a building fashioned after a spring house to serve as the changing room near the swimming pool. As he explained to the owners in a letter, the small creek near the swimming pool on the sloping property was, in fact, the most likely location for an actual spring house. He took these facts into account in his layout of the house and the various out-buildings as he worked to create a structure that was true to colonial practice.

Many of his clients were extremely prominent leaders and businessmen. Among them were Supreme Court Justice Owen J. Roberts, Attorney General of the United States Philander C. Knox, and Governor of Delaware C. Douglas Buck. Others included Ernst R. Behrend, founder of the Hammermill Paper Company, and Joseph Hergesheimer of West Chester, one of the country's most popular novelists of the 1920s. It is interesting to note that Mr. Hergesheimer was so attached to his home and so thoroughly engaged in the process of Mr. Okie's renovation, that he wrote a book in 1925 describing his experience, titled From an Old House.

Today, many of Mr. Okie's houses are still in private hands, and some have undergone careful renovations by devoted owners. Often his houses were part of a large estate. In the case of Ernst Behrend's home, the property totaled 400 acres. Some of Okie's residences no longer serve as private homes, having passed to a school or community. For example, Ernst and Mary Behrend's "Glenhill Farm" has served the campus of Penn State Erie since 1948; the former "Barclay Farm" of the McFadden family in Rosemont became the Agnes Irwin School for Girls in 1960; and "Appleford" in Villanova, formerly owned by Lewis and Anabel Parsons, was given to Lower Merion Township and is available as a special-events venue.

Mr. Okie received commissions for several public projects. One such project was the restoration of the Betsy Ross House in Philadelphia which he completed in 1937, and which was funded by radio mogul Atwater Kent. Another project was the 1930 restoration of Pennsbury Manor, the home of William Penn, in Morrisville (Bucks County), which today serves as a museum of the Pennsylvania Historical and Museum Commission.

For most of his adult life Mr. Okie resided in Devon at his colonial-era fieldstone home, known as Hillside Farm. He and wife Christine raised horses and were early participants in the Devon Horse Show. He was active for many years as a vestryman in his church, St. David's Episcopal Church of Wayne. The historic church building, built in 1715 still stands today. Not only did Mr. Okie plan two architectural renovations to the fieldstone church building, he also used it as a model for the small-scale chapel that he designed for Ernst Behrend in the Wintergreen Cemetery in Erie.

Brognard Okie was killed in an automobile accident on December 27, 1945, in West Chester. He was 70 years old. His son, Charles, then 27-years-old, was in the car too and seriously injured. However, he recovered and went on to his own successful career, maintaining his father's interest in the Colonial Revival style. At the time of his death, Mr. Okie was survived by his wife Christine, whom he had married in 1903, and by a daughter. Brognard Okie's professional papers, including correspondence with his clients and his architectural drawings are located in the Pennsylvania State Archives in Harrisburg.