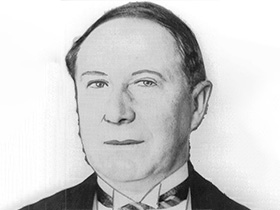 Oberholtzer wrote many books, most notably the five volume A History of the United States Since the Civil War.

Ellis Paxton Oberholtzer was born in 1868 at Cambria Station in Chester County, Pennsylvania. He received his Ph.D. in history from the University of Pennsylvania in 1893. He served as secretary of the Pennsylvania Board of Motion Picture Censors from 1915-1921. He was a member of the Valley Forge Historical Commission from 1925-1935, and was also involved in the English-Speaking Union. Oberholtzer served as secretary for the Transatlantic Society of America, the Scottish Memorial Association, and the Franklin Inn Club for Men With Literary or Artistic Interests. He also served as the corresponding secretary for the Historical Society of Pennsylvania. Oberholtzer died in 1936 after suffering a heart attack.

Ellis Paxton Oberholtzer was born at Cambria Station in Chester County, Pennsylvania, on October 5, 1868. Oberholtzer was the eldest of two children born to John Oberholtzer, a merchant, and Sara Louisa Vickers Oberholtzer, a poet and novelist. Well-educated in prepatory schools during his adolescence, Oberholtzer attended the University of Pennsylvania in 1885, where he studied political science and economics. Upon graduating in 1889, Oberholtzer joined the staff of the Philadelphia Evening Telegraph, where he worked as an associate editor while completing a Ph.D. in history at the University of Pennsylvania. In September of 1893, Oberholtzer traveled to Europe, where he continued his studies at several European universities. Much of Oberholtzer's time abroad was spent in Germany, where he completed a book on journalism in Germany, entitled Die Beziehungen zwischen dem Staat und der Zeitungspresse im Deutschen Reich (translated The Relationship Between the State and the Press in the German Empire), which was then published in 1895.

Upon returning to the United States in 1895, Oberholtzer continued his career as an editor. He worked for several Philadelphia based publications, such as the Philadelphia Manufacturer, The Philadelphia Times, and the Public Ledger, where he focused mainly on works of a historical nature. He served as a biographical editor for a work about his alma mater, entitled, University of Pennsylvania: Its History, Influence, Equipment, and Characteristics, which was later published in 1901. G.W. Jacob's and Company of Philadelphia selected Oberholtzer as editor of the American Crisis Biography Series, which dealt primarily with the Civil War. Oberholtzer completed two biographies for the series: one of Abraham Lincoln, and another of Jay Cooke, entitled Jay Cooke: Financier of the Civil War. His work on Jay Cooke was one of the first scholarly biographies in American business history. While working on the American Crisis project, Oberholtzer wrote a historical piece of his hometown, entitled, The Literary History of Philadelphia, which was published in 1906. Later, in 1912, Oberholtzer wrote another 4-volume historical piece of Philadelphia, entitled, Philadelphia: A History of the City and Its People, a Record of 225 Years, which expanded upon his previous history of the city.

From 1915 to 1921, Oberholtzer served as the secretary of the Pennsylvania Board of Motion Picture Censors. He worked stringently to restrict the treatment of sex in the cinema, an action that would eventually lead to his dismissal by Governor William C. Sproul, who was under pressure from certain, powerful interest groups. His dismissal from the board encouraged Oberholtzer to write, The Morals of the Movie, in which he argued that a large school of motion-picture producers worked zealously to provide the sensation-driven American public with something unusual and different. Oberholtzer stood by his belief that censorship was the only true way to control this problem.

In 1917, while serving as secretary for the Pennsylvania Board of Motion Picture Censors, Oberholtzer introduced the first volume of his most acclaimed series, entitled, A History of the U.S. Since the Civil War. Arranged in five separate volumes spanning 1865 to 1901, the series focuses on public and political life in the United States following the end of the Civil War. In his first volume, Oberholtzer discusses possibly the most important impact the Civil War had on everyday life in the U.S.: the abolition of slavery. He discusses the animosity between ex-slaves and ex-masters, as blacks now work the same fields for newly acquired wages. He describes this in such passages as:

Of a certainty the negro was not fond of work, and he did not now recognize the right of any one, though he was bound under a contract for wages, to require it of him. Howell Cobb's overseer on his Hurricane Plantation in Georgia told the men to go into the fields. They remained in their houses for two or three days at a time, saying they were sick or that they were drying fruit. "Tha air," said he, "steeling the green corn verry rapped. Som of them go when tha pleas and wher tha pleas an pay no attention to your orders or mine...You had as well SingSams to a ded horse as to tri to instruct a fool negrow."

Oberholtzer continues to describe this animosity in further passages, stating:

The negro might not stand, as he formally had stood, with his hat in his hand while the white man passed by. Possibly he would not open a gate, or make way on the sidewalk, or otherwise carry himself with that deference which earlier had marked his life. And he did fifty worse things that were not compatible with his welfare, or that of his employer, who in turn was likely to go for redress to the United States officers. Every post commandant, every Freedmen's Bureau officer, had long monthly records of the complaints of ex-slaves and ex-masters, one of the other.

Oberholtzer married Winona McBride on November 19, 1926. He and Winona never had any children. Besides research and historical writing, Oberholtzer had various other interests, and was involved in a host of organizations. He was a member of the Valley Forge Historical Commission from 1925-1935. He was also involved in the English-Speaking Union, which was an organization created with the sole purpose of developing better relations with Great Britain. Along with these, Oberholtzer served as secretary for both the Transatlantic Society of America and the Scottish Memorial Association, as well as the corresponding secretary for the Historical Society of Pennsylvania. Oberholtzer also participated in Philadelphia's social and cultural life as secretary of the Franklin Inn Club for Men With Literary or Artistic Interests.

On December 8, 1936, while visiting the Historical Society of Pennsylvania to check a manuscript of the fifth volume of his most acclaimed series, A History of the United States Since the Civil War, Ellis Paxton Oberholtzer suffered a heart attack and died. He is buried in Philadelphia's West Laurel Hill Cemetery.