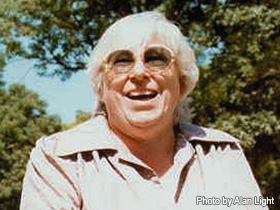 Atheist activist Madalyn Murray O'Hair was called "the most hated woman in America" by Life Magazine.

Born in Pittsburgh in 1919, Madalyn Murray O'Hair joined the Women's Army Auxiliary during World War II. During her service she had an affair with an officer, and gave birth to her first of two unwed children. Murray did not agree with the organization of American Society, and felt misplaced. While living in Baltimore, she attended several Socialist Labor Party meetings, and joined other freethinking organizations. In 1963, she won a Supreme Court case against the Baltimore School District, outlawing bible recitation. O'Hair founded the American Atheists, and served as the group's spokeswoman. O'Hair was murdered by David Roland Waters in 1995.

Madalyn Murray O'Hair was born Madalyn Evalyn May on April 13, 1919, in Beechview, a suburb of Pittsburgh, Pennsylvania. Her mother, Lena Christina Scholle, was one of ten children, forced to work as a maid during her teen years to earn money for her family. O'Hair's father, John Irwin O'Hair, or "Pup" as O'Hair referred to him, was also from a large lower-class family. Lena and John were married just days after their first meeting. The O'Hair family also had another child, John Jr., or "Irv," as everyone called him, born two and a half years prior to their daughter. John supported his family by taking on small business ventures, often leaving the family behind to take on a new job. He started his own construction business in Pittsburgh, but was broke by 1929. For most of her childhood, O'Hair and her family were constantly moving around Pennsylvania and Ohio, living with relatives in different areas. Although O'Hair would later claim that she enjoyed a luxurious childhood, the reality was that the family was just scraping by. Lena taught her daughter the fine arts of housekeeping, and took the family to church regularly, which at the time O'Hair enjoyed. Several years later she recounted a weekend as a child, when she read the entire Bible. She reacted with disgust at the "cruelty and immorality" it contained, and was disappointed that her parents believed it. This moment has been described as the beginning of her Atheist ideals.

During Madalyn O'Hair's teenage years, the family lived with Lena's brother in Rossford, Ohio. While there, O'Hair learned about government paternalism, and began to formulate opinions about the functioning of the American government. She spent much of her free time at the drug store across the street from her house, listening to classical music and joining in political discussions. She attended Rossford High, an academically rigorous school with underlying religious ideals. O'Hair was described by her peers as intelligent, holding strong personal beliefs, and always daydreaming about her "big plans" for the future. In 1936, at the age of 17, O'Hair graduated from Rossford High. She then enrolled at the University of Toledo on a National Youth Administration Scholarship, with hopes of becoming a doctor.

While she was taking classes, O'Hair also did the payroll and bookkeeping for her father's new contracting business. Under her father's pressure, she also enrolled in a few civil engineering classes at the University. When the women's movement began, O'Hair was a supporter, although she always separated herself from the other women. In 1941, at the age of 22, she married John Henry Roths, a marriage as impulsive as her parents'. This impulsive choice did not prove successful; in 1943, O'Hair divorced Roths.

After hearing about the events of Pearl Harbor, O'Hair decided to enter the Women's Auxiliary Army Corps in 1943. Her high IQ led her to the rank of Second Lieutenant, and she became a cryptographic officer for the Signal Corps. During her stay in the army, O'Hair traveled to several different countries, discovering her passion for traveling. She was intrigued by the different cultures and people in other countries. One of her jobs working in the army was to invent battle details, and report these "lies" to the media. O'Hair had an affair with William Murray Jr., an officer in the eighth Army Corps. She gave birth to their son, William Joseph Murray III., but William Jr. refused to leave his wife and help raise his son. Years later, O'Hair adopted his surname for both her son and herself. While in the army, she began to openly question religion, and partly attributed it to why William Jr. refused to leave his wife.

In 1946, Madalyn Murray entered Ashland College, focusing her studies in history. Over the next few years she held several small jobs, not being able to hold one for very long. She then attended the South Texas College of Law, where she received an LL.B, although she never got her license to practice. O'Hair got a job in the engineering department of a plane manufacturing business, where she had an affair with a fellow employee, Michael Fiorillo. Nine months later their son, Jon Garth, was born. After getting pregnant, Murray was forced to quit her job, and endured many heated arguments with her father about her "immoral" actions. He did not agree with her life decisions, and was not afraid to voice his opinion.

In 1956, Murray joined the Socialist Labor Party (SLP). Her past history and legal education proved useful; she began speaking at meetings, marches, and protests held by the organization. Murray always felt like an outsider in society, and described herself as being "misplaced in America" as quoted by Ann Seaman in her book America's Most Hated Woman. She unsuccessfully tried to gain citizenship in Russia (formerly USSR), falsifying information in an attempt to achieve this goal. In December 1960, Murray protested against the religious observation and prayer that took place in her eldest son's (William) Baltimore public school. Her case, Murray v. Curlett, was tried in the Superior Court of Baltimore where it was dismissed. The case had already gained national attention by the time she appealed and took the case to Supreme Court. It was joined with a similar case, Abington School District v. Schempp, and in June of 1963, the court ruled that required bible reading and recitation were unconstitutional in public schools. Throughout the court proceedings, and even after the ruling, Murray experienced a large amount of opposition from the public. Her sons were threatened in school, and the family was harassed everywhere they went.

After gaining media attention from her court case, Madalyn Murray was called upon to help with other causes that would further separate church and state. One of her projects was challenging the tax exempt status of churches, which she took to court and lost. Another was helping to create the Freethought Society, whose goal was to promote the separation of church and state, and educate the public about nontheist lifestyle. She also published newsletters, made appearances on television, and gave speeches. Over the next several years, Murray was involved with many court cases, creating opposition wherever she went. Although she enjoyed a good relationship with her mother, she no longer got along with her father who disapproved of her values. Her brother Irv and eldest son William also had an increasing dislike for her, eventually breaking all ties with her, and taking control of the Freethought Society. Several years later William converted to Christianity, and became a preacher. This led to a permanent estrangement between mother and son. William's negative view of his mother is evident in his writing, "My mother was an evil person ... not for removing prayer from America's schools ... no ... she was just evil." The majority of the country also seemed offended by her; Life magazine gave her the title "most hated woman in America." In October of 1965, Murray married Richard O'Hair, and they remained together until his death eleven years later. After his death, she took over the Society of Separationists, the organization that Richard had presided over. The organization's philosophy was based on free thought, and atheist ideals.

During the next 15 years, she established an American Atheist Center in Austin, Texas, and established the American Atheist Press. The purpose of the center she created was to provide support for practicing atheists, and give them the necessary materials to defend their views. She also created the Charles E. Stevens American Atheist Library and Archives. O'Hair published a magazine, American Atheist,and broadcasted information about her cause on the radio and television. She appeared on shows hosted by personalities such as Steve Allen, Mike Douglas, and Johnny Carson in an attempt to reach the largest audience possible. She also gave lectures at various campuses such as Dartmouth, Harvard, UCLA, and the University of Pennsylvania. By the early 1970s, O'Hair had become the leading proponent for Atheism in the United States.

The American Atheists group prospered during the 1980s, but their notoriety began to recede during the following decade. O'Hair continued to preside over the organization, becoming increasingly concerned with the organizational income during the 1980s. In 1984, at the age of 65, it was obvious that she was beginning to grow tired of fighting for the Atheist viewpoint. She felt like progress had been made over the past twenty five years, and that the American public had a greater tolerance for Atheists than before. In April of 1986, Madalyn Murray O'Hair resigned as president of the Society of Separationists and American Atheists. She appointed her son, Jon Garth Murray, to take her place. Even though she turned over the leadership, she had not given up on the movement or her beliefs.

On August 27, 1995, O'Hair, her son, Jon Garth Murray, and her grandson, disappeared from the American Atheist headquarters. After the discovery of a large amount of missing funds from American Atheist assets, it was suspected that the three had stolen the money and fled. After further investigation, David Roland Waters, former office manager of American Atheists, became the prime suspect in the possible murder of the Murray-O'Hair family. In September of the same year he admitted to the triple homicide, and revealed the location of the bodies, which were buried on a Texas ranch. To this date, the American Atheists still exists as an organization, and O'Hair is still considered to be the best known Atheist in America. She set the foreground for practicing Atheists in America, and helped them to stand up for their beliefs. Madalyn Murray O'Hair is quite possibly hated by many, but also admired by a few for her strength to fight for her beliefs.