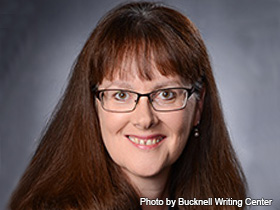 Born in Pittsburgh, Pennsylvania in 1963, Deirdre O'Connor lived in the South Hills as a child and attended Bucknell University and Pennsylvania State University for her Bachelor and Master's degrees. She has won several awards and grants for her poetry, including the 2001 Cleveland State Poetry Prize for her collection Before the Blue Hour (2002). At the time of this writing, she is the director of the Bucknell University Writing Center.

Deirdre O'Connor claims that her family is one of the largest inspirations for her work. The oldest of four, she was born in Pittsburgh and raised in the South Hills neighborhood of the city. Her grandparents, some natives of Ireland and some the children of Irish and German immigrants, have had a great impact on O'Connor's expression of her Irish heritage. The poet has visited Ireland several times and has even spent two summers there. While attending Bucknell University to get her Bachelor's degree, she studied at Trinity College in Dublin for a semester in her junior year. To complete her Master's degree, she came to the Pennsylvania State University. After college, O'Connor went to Fukushima-ken, Japan, to teach English as a Mombusho English Fellow. Her time spent there is reflected in "Traveling at Night in Fukushima," a poem that journeys from a train in Japan to O'Connor's Pennsylvania home, drawing on the familiar to create parallels between two distant places.

O'Connor's first book of poetry, Before the Blue Hour, was published in 2002 and contains "Traveling at Night in Fukushima." Filled with explorations of silence and dwelling on transitional moments, Before the Blue Hour won the 2001 Cleveland State Poetry Prize for best full-length volume of original poetry. Its veiled subjects range from family memories to encounters with unnamed loves, each subject addressed at oblique angles that leave the reader with a sense of mystery and loss. The poem "Boggle" provides an example of how O'Conner is capable of constructing a scene by filling it with emotion as it progresses, both fleshing out the piece and simultaneously whittling it down to its core:

I didn't know how to act around you at first,
safe in the sunlit rec room, the bright formica
tabletops, plants and smoke. I was happy enough
to sit down and puzzle things out, to recognize
order in chaos and form small words...
I was trying to rise up out of our life and smile.
The cuts on your wrist were stitched and hidden
though I pictured them as little mouths
the doctors had washed out with soap,
toothless, tongueless, misconstructed,
and puckered shut like poker faces who lost —
like you, perhaps yourself again, or not,
a face scrunched up in childlike concentration
over Boggle, your left hand shielding
what your right hand wrote, your mute wrists
keeping their secrets.


Other inspirations for her work include volunteerism, which she says has influenced her "in ways that may or may not be visible." Her experiences include supporting sexual assault survivors, leading writing groups at Allenwood Federal Penitentiary, and participating in the Bucknell Brigade to Nicaragua.

O'Connor has received many awards, such as a grant from the Pennsylvania Council on the Arts, an Academy of American Poets Prize, and a Donn Goodwin Award for Irish-American poetry. Her work has been featured in several journals, including River City, Poetry, Hayden's Ferry Review, Poetry, Natural Bridge, and Painted Bride Quarterly, among others.

Her poem "Notes on the Unspoken," from Before the Blue Hour (2002), was selected for publication by the Public Poetry Project of the Pennsylvania Center for the Book in 2004.

Living on a farm in Winfield, Pennsylvania, O'Conner is married to Bucknell Professor and Clinical Research Psychologist Bill Flack. Together they are parents to Flack's 18-year-old son, Will. New work by O'Conner is forthcoming in Crazyhorse and Pebble Lake Review. Her second manuscript of poems, Mouth of the Sparrow, has been a frequent finalist and eagerly seeks a press to call home.