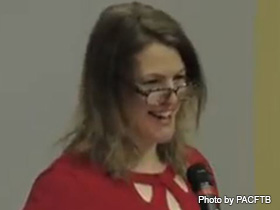 Marci Nelligan is a teacher and poet, whose work is often inspired by source texts. Her poem "[When you guide the rope…]" was selected for publication by the Public Poetry Project of the Pennsylvania Center for the Book in 2018 and is from her collection The Ghost Manada, a work written in response to Cormac McCarthy's Blood Meridian. She is the author of Specimen (2007), Nascent (2014), and Infinite Variations (2016), among others. Nelligan also leads arts education programs as a Program Coordinator of South Central PaARTners, a regional branch of the Pennsylvania Council on the Arts, Arts-In-Education program. At the time of this writing, she lives in Lancaster, Pennsylvania, where she is a Visiting Assistant Professor of English at Franklin & Marshall College.

The work of poet Marci Nelligan has been described as "courageous and devastating. Primal and elusive. Lavish (and, most importantly) excruciatingly beautiful." This is what Eliot White of The Triangle says of Nelligan's The Ghost Manada (2016), a work written in response to Cormac McCarthy's Blood Meridian.

"It's excruciatingly beautiful and excruciatingly horrifying. And there is not a woman in that book. So I got a little angry at [McCarthy] about that and so I'm taking him to task, but also I'm really inspired by the beauty of his prose."

In The Ghost Manada, "[Nelligan] confronts McCarthy's omission of women by co-opting his language and rearranging the words on the page to highlight that absence, specifically in the instances where female characters are mentioned as standing in a doorway," White explains. "This is the kind of critical art that our society desperately needs."

Marci Nelligan completed her undergraduate work at Bard College and the State University of New York (SUNY) – Albany (1991), and earned her MFA in Poetry from Mills College (1999). In 1999, Nelligan received the "Writers on Site" grant from Poets & Writers. She is the author of multiple works, such as the chapbook Nascent (2014) and the collection Infinite Variations (2016). With Nicole Mauro, she is also the coeditor of Intersection (2008), an interdisciplinary meditation on public spaces and the work of Jane Jacobs in the form of essays.

Nelligan's work leans towards the experimental, and in Jacket Magazine she says of her chapbook Specimen (2007), "I had a vision for this piece from its inception. The book would resemble an antiquated scientific journal (a thing I invented in my head being neither a scientist nor a historian) — a pad on which an early naturalist might jot field notes or thoughts about god, or both, connoting the poems' treatment of Darwin and the Old Testament." This chapbook relied on source texts, similar to The Ghost Manada, and was a prelude to Infinite Variations, described by poet Juliana Spahr as "provocative in its simplicity, luminous in its word play."

While writing and teaching, Nelligan has also led arts education programs as a Program Coordinator of South Central PaARTners, a regional branch of the Pennsylvania Council on the Arts, Arts-In-Education program. In her role, she has helped "bring artists into public schools, senior centers, and other community organizations through artist residences," according to Millersville University's 2016/2017 Arts Annual Report. She has also helped artists develop teaching methods and classroom activities.

"Students engaged with the arts have higher test scores, higher test scores on the SATs, much higher rates of graduation, and lower rates of behavior problems (even if they have behavior problems prior to their engagement)," Nelligan says. "These data points also improve with the number of hours that a student is engaged in the arts and to which degree they are engaged."

At the time of this writing, Marci Nelligan lives with her husband and daughter in Lancaster, Pennsylvania, where she is a Visiting Assistant Professor of English at Franklin & Marshall College.