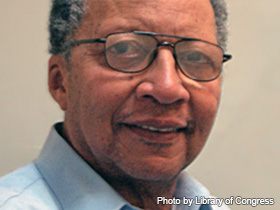 Born in 1937, Walter Dean Myers was widely recognized as one of the foremost authors of contemporary children's literature and poetry. His realistic yet hopeful portrayals of young urban life garnered many awards, including the 2005 Lee Bennett Hopkins Poetry Award, awarded annually to an American poet or anthologist for the most outstanding new book of children's poetry. His later works also branched into nonfiction historical accounts and biographies. Myers died in July of 2014 at the age of 76.  Read more here.

Walter Milton Myers was born into an impoverished family in Martinsburg, West Virginia, in 1937. However, he spent most of his childhood in New York after his mother died when he was three years old and his father entrusted him to his first wife, Florence, who adopted him in partnership with her husband, Herbert Dean. Florence, a native of New Franklin, Pennsylvania, via German emigration, raised him as her own in the Harlem neighborhood, which informed most of his later work. He eventually incorporated the Dean family name as part of his own.

A speech impediment prompted the young Myers to begin collecting his thoughts in poems and short stories. In fourth grade, Myers published his first poem in the school yearbook, igniting a lifelong love of poetry. In Bad Boy: A Memoir (2001), he related that he was a good student, but his foster family lacked the finances to send him to college. "I wrote well in high school," Myers writes on his website, "And a teacher (bless her!) recognized this and also knew I was going to drop out. She advised me to keep on writing no matter what happened to me. 'It's what you do,' she said." Myers dropped out of high school in 1954 at age seventeen and served in the army until his discharge in 1957. After military service, Myers worked a string of jobs while attending the City College of the City University of New York and continuing to submit short works to various periodicals. "I didn't know exactly what that meant," he said of his high school teacher's advice. "But, years later, working on a construction job in New York, I remembered her words. I began writing at night and eventually began writing about the most difficult period of my own life, the teen years. That's what I do."

Myers moved to Indianapolis to join the editorial staff of Bobbs-Merrill publishing house in 1969. Already an avid writer, he had submitted work to magazines, tabloids, advertising copy, and other avenues of publication. Mystery magazines published his submissions, earning him $5 or $10 checks. Spurred by the wish to write something of consequence, he submitted a children's picture book entitled Where Does the Day Go? (1967) to a writing contest sponsored by the Council on Interracial Books for Children. His book, which featured children of various ethnic backgrounds theorizing about the nature of night and day, won the contest, and Myers decided to pursue success in children's literature, while working as an editor at Bobs-Merrill publishing. By 1977, he had left Bobbs-Merrill and was writing full time.

Myers' subsequent works continued to take an uncompromising look at the plights and issues of urban African-American youth, drawing upon his own experiences while growing up in Harlem. His refusal to shrink from harsh realities or to be condescending toward his audience garnered much critical applause, evidenced by two Newbery Honor Medals (for Scorpions [1988] and Somewhere in the Darkness [1992]), four Coretta Scott King Awards (for The Young Landlords [1979], Motown and Didi [1987], Fallen Angels [1988], and Somewhere in the Darkness), and dozens of other accolades. Those honors include the 2005 Lee Bennett Hopkins Poetry Award administered by the Pennsylvania Center for the Book for the poetry collection Here in Harlem: Poems in Many Voices (2004). The Hopkins award is awarded annually to an American poet or anthologist for the most outstanding new book of children's poetry published in the previous calendar year. His novel Monster, the story of a young Harlem man's trial for murder, was a National Book Award finalist in 1999 and the first winner of the Michael L. Printz Award.

Children's literature has not been Myers' only domain. He has branched out into nonfiction historical accounts and biographies, such as Now is Your Time! The African-American Struggle for Freedom (1991). The book recounts the black experience in America through biographical vignettes from the lives of Frederick Douglass, John Brown, Coretta Scott King, and others. A Washington Post review of the book stated that, "[Myers] writes with the vividness of a novelist, the balance of a historian, and the passion of an advocate." Other works have captured the contributions of Malcolm X and Major Fred Cherry, a Vietnam prisoner of war, among a wide and varied list.

Carmen Subryan, in Dictionary of Literary Biography, wrote, "Whether he is writing about the ghettos of New York, the remote countries of Africa, or social institutions, Myers captures the essence of developing experiences of youth." According to Kay Vandergrift of Rutgers University, Myers said in his 1994 acceptance speech for the Margaret A. Edwards Award, "The special place of the young adult novel should be in its ability to address the needs of the reader to understand his or her relationship with the world, with each other, and with adults."

His poem, "Gerry Jones, 14: Student," from Here in Harlem: Poems in Many Voices, was selected for publication by the Public Poetry Project of the Pennsylvania Center for the Book in 2005.

In 2012, Myers was named the National Ambassador for Young People's Literature at age 74 and he continued to promote literature among America's youth through his final days. He remained active with the Walter Dean Myers Publishing Institute, part of the Langston Hughes Children's Literature Festival, and volunteered at area schools near his home in Jersey City, New Jersey, including frequent appearances with the National Basketball Association's Read to Achieve literacy program. His Autobiography of My Dead Brother was published in 2005, and his most recent book, Scorpions (2013), follows a young man who faces the challenges of gang membership.

Of his 2011 picture book of lyrical verse, We Are America: A Tribute from the Heart — a collaboration with his son, illustrator, Christopher Myers — Walter Dean Myers said in a HarperCollins interview clip, "I get hundreds and hundreds of letters from kids all over the country ... and they want to think of themselves as Americans no matter where their parents came from. No matter how long they have been in the country. They want to think of themselves as Americans, and I think that not only do we have to think of them as Americans, but we also have to give them the language and the images to reinforce that. It's not 'I am America' it's 'We are America.'"

Following a brief illness, Walter Dean Myers died on July 1, 2014, at Beth Israel Medical Center in Manhattan, New York. He was 76. He had lost his daughter, Karen, and is survived by his sons, Christopher and Michael, wife, Constance, six grandchildren, and two great-grandchildren.

"Books transmit values," Myers wrote in a New York Times opinion piece. "They explore our common humanity." As the author of over 100 books, he had joked with his son Christopher that "when he passed away there would still be books coming out in his name," according to a New York Times article by Felicia R. Lee.

Three of Myers books are slated for forthcoming publication: a futuristic novel, "On a Clear Day," due September 2014, a novel about a 19th-century tap dancer, "Juba," due April 2015, and a graphic novel adaptation of "Monster," expected 2015.