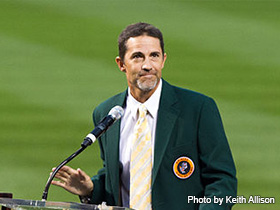 A pitcher for the Baltimore Orioles and the New York Yankess, Mike Mussina was elected to five All Star Games.

Mike "Moose" Mussina was born in 1968 in Montoursville, Pennsylvania. He is a 5-time All-Star pitcher for the Baltimore Orioles and the New York Yankees. He had compiled 270 victories, six American League Gold Glove Awards, and a 3.68 career ERA during his career. He attended college at Stanford University from 1987-1990, winning the College World Series in 1988. Previously, he led the Montoursville Area High School to a state title in 1987, compiling a .87 ERA. He retired from Major League Baseball in 2008, and resides in his hometown of Montoursville, where he coaches basketball and baseball.

Mike Cole Mussina was born in 1968 in Montoursville, Pennsylvania. While attending the Montoursville Area High School, Mike had a 24-4 record, a .87 ERA, and led his baseball team to the state championship during his senior season. Along with his expertise on the mound, Mike played basketball and football during the off season and barely missed being named the valedictorian of his graduating class. As a child, Mussina would spend hours in the basement of his house, alone, throwing a ball against a strike-zone taped to the wall. The mental conditioning process that this began would pay later dividends, when on the mound in the Major Leagues. Since an early age, Mike was referred to as "Moose," not because of his physical stature, but due to the beginning of "Muss-ina." This nickname would later accompany him to the New York Yankees' and Baltimore Orioles' clubhouses. After high school, he turned down a six-figure salary to attend Stanford University on a partial-scholarship.

While at Stanford, Mussina was a key contributor on the 1988 College World Series Champions Stanford ball club during his freshman year. He became a member of the Delta Tau Delta (DTD) fraternity, pitched to a 31-16 record with a 3.89 ERA, and graduated with a degree in economics in only three and a half years. By the end of his college career, Mussina made two College World Series appearances (winning a National Championship during his freshman year, and losing in the semi-finals during his junior season) and was selected as an All-American. In 1990, "Moose" entered the Major League Baseball draft and was selected in the first round by the Baltimore Orioles (20th overall selection). While in the minor leagues, Mussina had a 14-4 record with a 2.38 ERA for the Orioles' minor league club.

Mike Mussina made his Major League debut on August 4, 1991, against the Chicago White Sox. He recorded a 1-0 loss due to a Frank Thomas solo homerun, but would record his first win on August 14 when he faced the Texas Rangers. Frank Thomas's homerun was the first in what would become a career-long battle between the two.

During 1992, Mussina recorded an 18-5 record during his first full season in the major leagues. His stellar season resulted in a 2.54 ERA, a fourth-place finish in the American League Cy Young Award voting, and his first of five American League All-Star selections. He would be selected to the All-Star team during each of the two seasons that followed (1993 and 1994). In 1994, a strike-shortened season would cost him a chance at his first 20-win season, finishing with 16 wins. This was the first of multiple near-20-win seasons that were cut short for various reasons.

In 1995, Mussina had won 19 games before being deprived of at least three starts by the 144-game schedule, instead of the normal 162-game schedule. In 1996, he could not record that elusive twentieth win after winning 19 games and having four starts remaining. During the 1996 season, Mussina had left a game with a 2-1 lead when the closing pitcher, Randy Myers, allowed the tying run to score during the ninth inning, thus making the game a no-decision for Mussina. In 1999, Mike recorded 18 victories, but was forced to miss four starts due to an injury to his right deltoid muscle. It was not until his final season in 2008 that "the Moose" was able to achieve his first 20-win season.

During the following season, Mussina's hometown of Montoursville experienced a national tragedy. On July 17, 1996, TWA Flight 800 mysteriously exploded and crashed into the Atlantic Ocean. The plane was carrying 16 French Club students and five chaperones from his alma mater, the Montoursville Area High School. To show his hometown support during the aftermath of this tragic incident, Mussina wore the names of the 21 victims on the bill of his cap for the rest of the season.

During a recent interview with the author, Mussina explained his reasons for the gesture following the explosion. He said:

I just thought that it would be just a small way to honor them, to remember them, to let them know that we were always thinking about them and that this town would never be the same because of what happened... It's just something small that you can do. There's not much I could do, seeing what I was doing at the time... so I just put their names in my hat, and it stayed there as long as I kept wearing that hat — which was probably most of the rest of the season.

Mike Mussina was an American League All-Star selection during 1997 and 1999, before signing a 6-year, $88.5 million contract with the New York Yankees on November 30, 2000. He mentioned during the recent interview that the first Major League Baseball game that he can remember attending was a Yankees game. In 2001, during his inaugural season with the club, Mussina finished with a 17-11 record, a 3.15 ERA, 214 strikeouts, 3 shutouts, and 4 complete games. During the 2002 season, he compiled an 18-10 record and crafted one of the greatest relief pitching performances of the American League Championship Series (ALCS). Mussina was called out of the bullpen with two runners on base and no outs, during a 4-0 Boston lead over the Yankees. Mike went on to strike out Jason Varitek and cause Johnny Damon to hit into an inning-ending double play. "Moose" continued to pitch two more scoreless innings, allowing the Yankees to eventually come back and take the lead. The pitching expertise that he exemplified during this game would allow him to reach various milestones throughout his career.

Mussina reached the 2,500 strikeout mark on June 25, 2006. Additionally, he became the first pitcher in American League history to reach 10 or more wins during 15 consecutive seasons (he would ultimately retire after doing this for 17 consecutive seasons). On November 20, 2008, following his first-ever 20-win season, Mike Mussina officially announced his retirement from Major League Baseball. Mike "Moose" Mussina went out on top, being just the fifth pitcher since 1900 to win 20 or more games during his final season, and was the first since Hall-of-Fame pitcher Sandy Koufax did in 1967. Mike recorded a 270-138 record and a 3.68 career ERA.

After his retirement, Mussina was excited to return to his hometown, Montoursville, PA, where he now resides in a secluded house amidst 100-acres in the backcountry of Central Pennsylvania. When asked what makes the small town of Montoursville (approximately 5,000 residents) so enjoyable for a man of his stature, Mike responded:

I grew up here my whole life, so I had never been any place else (except for college). In college, if you have ever been to the big area of California, it's a little faster pace than it is here in Central PA. I grew up in a town where if I had to be somewhere in 10 minutes, I would be there in 10 minutes every time. There weren't traffic jams, there weren't other things going on, there aren't more cars on the road today than on the weekends - it's just always the same, and that's how I grew up... I never lived where I worked in the offseason. I would play ball, then the season would end and I'd come home [to Montoursville]. I'd spend the time here, and then when the season started up I would go [back to New York City or Baltimore]. I separated the two, not on purpose, it just turned out that way, but I needed the couple of months back here where the pace is better... I'm not somebody who needs to go-go-go all the time, so I needed the downtime and it probably helped me in the long run with my career.

Mike Mussina has established the "Mike Mussina Foundation," with the original purpose of raising funds and helping out around Lycoming County. Since its inception 11 years ago, it has evolved into a scholarship program wherein local school boards select a graduating senior student-athlete to receive the award. The purpose of the scholarship is to provide money to the student every year, for four years, to help with college expenses.

Since his retirement in 2008, Mike enjoys coaching baseball in Montoursville. He has two sons who play baseball (ages 11 and seven) and a 20-year-old step-daughter. Additionally, he remains active by coaching basketball during the winter months, working out a couple times per week, and doing housework on a daily basis. Beyond coaching baseball and basketball, Mussina enjoys classic cars, and he has; what he refers to as "a little bit of a collection" of them at his home in Montoursville. He also enjoys photography and has become more interested in it during the past six or seven years.

A five-time All Star and seven-time Gold Glove Award winner, Mike Mussina compiled a career record of 270-153 with an ERA of 3.68. His 270 victories are the 33rd most in MLB history. His .638 winning percentage places him 38th all-time, and his 2,813 career strikeouts are the 17th most in MLB history. Additionally, he finished within the top six of the Cy Young Award voting eight times and his 3.68 career strikeout-to-walk ratio is the 13th best all-time. Mussina finished his career with winning 11-or-more games in 17 consecutive seasons; a statistic that no other pitcher has equaled.