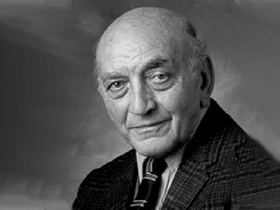 Motz spent most of his adult life lost in the stars...and explaining them to the rest of the world in books such as The Universe: Its Beginning and End.

Astronomer Lloyd Motz was born in Susquehanna in 1909. Earning a degree at the City College of New York, began a decades-long career of teaching and writing in the fields of physics and astronomy. He wrote over twenty texts while teaching at Columbia University. Motz died in 2004.

His professional career as a teacher began at City College where he served as an instructor in the physics department from 1931 to 1940. He moved to Columbia University in 1940 and stayed there for the rest of his long career. Motz also taught periodically at the Polytechnic Institute of Brooklyn from 1960 onwards.

During his career at Columbia, Motz published some twenty books and numerous articles and introductions to texts. Astronomy Department head David J. Helfand said that Motz's Essentials of Astronomy was "arguably the best introductory astronomy text ever written." In addition to writing books, Motz helped to create the Columbia University "Saturday Morning Science Honors Programs" in 1959, teaching high school students in the program until 1992. He also founded the General Studies chapter of Phi Beta Kappa at Columbia University and served as president of the New York Academy of Sciences in 1970. He even hosted a series of programs on local television in the early 1970s called "Exploration of the Universe."

Though he officially "retired" in 1977 and was granted the title "professor emeritus," Motz continued teaching for over twenty years. In 1996, Columbia University held a program honoring Motz and created a scholarship in his name, saying "we want future General Studies students to have the opportunity to discover the beauty of science exemplified in the astronomer's quest to understand the universe." Department Head David Helfand went on to say about Motz: "Professor Motz is an exemplar of our prime mission...No one has done it more successfully."