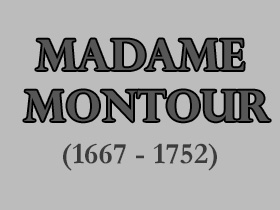 An interpreter between the Iroquois and the English settlers, Madam Montour is the namesake of Montour County.

Madam Montour, a mixed French and Indian woman, was probably born around 1667 in Trois-Rivières, Quebec. While most of the documentation of her life is contradictory, it is widely accepted that she was raised by an Indian tribe after the age of ten. As an adult, she interpreted between the Indian tribes and the English colonies, making peace possible between the starkly different cultures. Her famous son, Andrew Montour, continued her work after her death. A Pennsylvania county, town, stream, and mountain are all named for her, honoring her work easing the strain between Indian and colonial life. She died around 1753 in Harrisburg.

Elizabeth Catherine Montour, more widely known as Madam Montour, was born around 1667 at Trois-Rivières, Quebec. Much of her biography is unknown or debatable. This uncertainty extends even to her first name, which is most widely assumed to be Elizabeth Catherine. Her father was most likely Pierre Couc, a Frenchman, and her mother was an Algonquin whose name is unknown. Montour said that she was kidnapped by either the Iroquois or the Five Nation Indians as a ten-year-old child after the tribe killed her father during war. She claimed to have been raised by her captors. Another account asserts that she was captured when she was an adult and living among the English. There is evidence suggesting that she spent the lion's share of her youth in Michigan at Forts Mackinac and Detroit in the 1700s due to her family's involvement in the Indian trade. Either way, exposure to native tribes led to her later prestige as an interpreter across Pennsylvania and New York.

It is assumed that Montour married the Seneca brave Roland Montour while living in the New York area, taking his surname. Little is known of him, their marriage, or his death. Some believe that Montour never married him at all, but instead carried the name "Montour" with her since birth. In about 1711, Montour moved to Albany where her brother Louis was serving as an interpreter. Within a year of Montour joining her brother in Albany, he was murdered while conducting trade. Because of her extensive knowledge of both Indian and English languages (English, German, Algonquin, Iroquois, and French), Montour remained in Albany to replace him. She was hired by Robert Hunter, Governor of New York, to aid in communication between the Indian tribes and the English colonies. Because Montour was illiterate, she was considered a "cultural broker," mostly advising on the content of speeches and messages rather than composing them herself. In Ian Kenneth Steele and Nancy Lee Rhoden's The Human Tradition in Colonial America, Montour is described as, "a complex and multi-faceted individual who moved easily between native and settler communities, facilitating informed communication between different cultures." It is said that she attended conferences in Albany and Philadelphia, often using her influence to prevent wars. While her work between cultures was extremely successful for the English, it was detrimental to the French. The Governor of Canada tried to sway her allegiances and her abilities to the French side upon noticing her immense influence among the Indian tribes. The Governor even offered her a raise in compensation, which was notable since she was already being paid the same as a man. These attempts were unsuccessful since Montour was a known friend to the British.

During her time in Albany, Montour married an Oneida chief, Carondawanna. It is uncertain whether there were other marriages after Roland Montour and before Carondawanna, mostly because they may have occurred under Indian custom and therefore without record. Together Montour and Carondawanna moved to the village of Otstuagy, Pennsylvania, which would later be named Montoursville in her honor. She welcomed the British into town, while still serving to ease the strain of colonialism felt by the tribes in Pennsylvania. Montour was the mother to three famous children: Louis, Margaret, and Andrew Montour. Louis also served as an interpreter, but was killed during the French and Indian War; Margaret became the leader of a town close to Montoursville, named "French Margaret's Town;" Andrew became an extremely important negotiator and interpreter in the Virginia and Pennsylvania regions. Andrew's aid to tribes and settlers was so important that the French wanted him dead. Instead, he was murdered by a Seneca Indian in about 1772.

For at least the second time, Montour was widowed in the spring of 1729 when Carondawanna was killed fighting the Catawba in the Carolinas. Montour inherited the title of "Queen of the Iroquois" on the west branch of the Susquehanna and became an important leader of the Susquehanna River Valley, a popular stop for Moravian missionaries. She continued to rule the French and Indian town of Otstuagy. This mix led to a cultural hybrid, mixed with European and Indian customs. Count Zinzendorf, a Moravian missionary, writes about his experiences in Otstuagy: Records from Andrew Montour imply that Montour lost her sight while living with him during her later years.

Montour died between 1745 and 1753 probably near Harrisburg, then Harris's Ferry. Montour County, town, stream, and mountain bear her name, recognizing the areas where her extensive influence on early colonial communication was prominent.