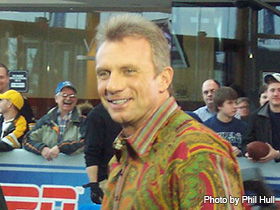 Born in New Eagle Pennsylvania, a couple miles outside of Pittsburgh, Joe Montana had an above-average football career at Notre Dame. Montana was drafted into the National Football League in 1979, and was the third pick of the 12th round. Montana went on to win four Super Bowls, three Super Bowl MVP awards, and is considered one of the greatest quarterbacks of all time. In 1990, he was given the Sports Illustrated "Sportsman of the Year award," and was inducted into the NFL Hall of Fame in 2000.

Joseph Clifford Montana was born on June 11, 1956, in New Eagle, Pennsylvania. His football career started early when his dad forged his birth certificate so that his son could play peewee football with the nine year olds, while Joe was only eight. This mentality towards sports allowed Montana to excel in football, baseball, and basketball at Ringgold High School, near Pittsburgh. For the season opener of his senior year Montana's team was listed as a terrible underdog, but when Montana had the team up 21-7 at halftime, his high school coach told reporters that his performance during this game convinced Notre Dame to feel comfortable with offering him a full scholarship. In high school football, Montana was a two-year starter and earned "Parade All-American" honors as a senior, he also led his basketball team to a league championship his senior year and was offered a full scholarship in basketball to North Carolina State. Although Montana was very talented in many athletic events, he knew his calling was football. Montana had aspirations of playing around the best, "I not only wanted to be the best, I wanted to play with the best. Obviously that meant playing quarterback at Notre Dame;" and that is exactly what he did.

Like the beginning of most division one college football careers, Montana found himself low on the Fighting Irish depth chart. Montana saw his first action in 1975 when he came off the bench against Northwestern, due to the starting and second-string quarterbacks being injured. He was so energized that he ran onto the field without his helmet, which he soon realized and went back to retrieve it. Montana played well and defeated Northwestern, and would end up leading the Irish to victories over North Carolina and Air Force. Montana's poise and promise was clearly shown against North Carolina when the Irish were trailing in the fourth quarter when Joe threw an 80 yard game-winning touchdown to Ted Burgmeier after changing the play at the line of scrimmage. Later, in 1977, Montana once again came off the bench as the third string quarterback against Purdue. This game put Joe Montana into the national spotlight and earned him the much deserved nickname, "The Comeback Kid." Montana led the Irish back from a 24-14 deficit with less than eleven minutes left to a 31-24 victory. His gutsy performance finally earned him a starting job and he lead his team that season to a 1978 Cotton Bowl birth and a chance at a national championship. What stood in the way between the Notre Dame Fighting Irish and a National Championship was the number one team, the highly favored Texas Longhorns. Surprisingly, the Irish never trailed in the game and shattered the Longhorn defense to produce a 38-10 victory and a National Championship. The following year, the 1979 Cotton Bowl proved Montana to be a consistent, clutch player, and produced the play that will never be forgotten by Notre Dame fans. On an unexpectedly cold day, Montana (who was already sick with the flu) was forced to leave the game against the Houston Cougars in the third quarter in order to treat hypothermia with chicken soup. He returned to the game to lead his team from a 22 point fourth quarter deficit to a 35-34 victory on a touchdown pass with no time left on the clock. This play summarized Montana's identity as a smooth college quarterback that played his best football in clutch situations; a coach's dream.

Montana's National Football League career began humbly as he was drafted in the third round, 82nd overall, by the San Francisco 49ers in 1979. He became the 49ers starting quarterback late in his second season, and against the New Orleans Saints he led a comeback from a 28-point halftime deficit, to a 38-35 overtime victory. That rally still stands as the most points ever overcome to win a regular season NFL game; Montana proved that his college nickname did not die when he made it to the pros. It was the first of Montana's 26 4th-quarter comebacks with the 49ers. In 1981, Montana's 49ers achieved a league-best 13-3 season. Just as Montana had a timeless last second touchdown pass to win the game at Notre Dame, he also made his mark in the NFL. In the 1981 NFC Championship game the 49ers were down six points with time dwindling down in the fourth quarter against the powerhouse Dallas Cowboys. As Montana had proven so many times, this was where he was at his best; he led the 49er offense on an 89 yard drive ending with a brilliant pass to Dwight Clark to win the game 28-27. The 49ers advanced to the Super Bowl under the leadership and poise of Montana. In the Super Bowl, Montana completed 14 of 22 for 158 yards and a touchdown leading the 49ers to a 26-21 win over the Cincinnati Bengals; Montana was deservingly awarded the MVP. Montana's next impressive season occurred in 1984 when he led the 49ers to a 15 and 1 regular season. This team is considered one of the most dominant teams ever to play in the National Football League according to ESPN Classics. That season the 49ers met the Miami Dolphins in the Super Bowl where Joe Montana faced off against Dan Marino. Joe Montana outplayed Marino leading his 49ers to a 38 to 16 victory.

For the next few years, Montana battled tough times and stubborn injuries, but refused to let his career slip away. While battling concussions, back problems, and other various injuries in 1988, Montana's 49ers started the season with an unacceptable 6-5 record. After future 49er star quarterback, Steve Young, threatened to take his starting position due to Montana's inconsistent play, Montana refocused and pushed his team to a 10-6 season. The 49ers fought through the playoffs and in Super Bowl XXIII versus the Cincinnati Bengals, Montana had one of the best and most memorable performances of his life. Montana completed 23 of 36 passes for 357 yards (a Super Bowl record) and two touchdowns. Characteristically, Montana found his team down 16-13 with three minutes left with the ball on their own eight yard line. Joe Montana smoothly led his team down the field finally completing a touchdown pass to John Taylor to seal the victory, and remind people who he was, "The Comeback Kid." Continuing on the successful path, in 1989 the 49ers completed a 14-2 regular season, cruised through the playoffs, and again made it to the Super Bowl. Montana completed the regular season with 3,521 passing yards, 26 touchdowns, and a NFL MVP award. Once again, the 49ers effortlessly made their way through the playoffs and defeated the Denver Broncos 55-10 in Super Bowl XXIV. After the highlight film-like performance Montana became the first person to throw five touchdown passes in a Super Bowl and win 3 Super Bowl MVP awards.

Then, in 1990 Montana once again accomplished a 14-2 season and earned "Sportsman of the Year" by Sports Illustrated. Unlike many before, this season would not have a fairytale ending, Montana would be injured in the 1990 NFC Championship game; the following two years would be plagued with injury and Steve Young would eventually take his place at the starting quarterback position. He then requested to be traded, and the Kansas City Chiefs picked him up. This caused a lot of excitement in Kansas City, although Montana's best days were behind him. Montana was injured for part of the 1993 season, but still managed to bring the team to an AFC Championship Game berth. In 1994, his final season, Montana faced his 49ers and beat them and his replacement, Steve Young, and earned a playoff appearance.

After the 1994 season, Montana retired as one of the greatest quarterbacks of all time. Montana proved to be smooth in clutch situations, and always seemed to find a way to win, which is more than you can ask for in any quarterback. In 1999,The Sporting News ranked Montana third on their list of Football's 100 Greatest Players and in the same year, ESPN named him the 25th greatest athlete of the 20th century. In 2006, Sports Illustrated rated him the number one clutch quarterback of all-time. Montana will be remembered as long as football exists for his unheard of achievements and will to win.

Montana resides in San Francisco, California, where he produces wine under the label Montagia.