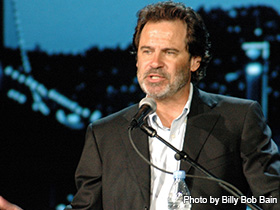 Stand-up comedian Dennis Miller, best known for his "rants," and his time on Saturday Night Live, was born in Castle Shannon.

Dennis Miller, born November 3, 1953, is a successful comedian, actor and television host. Starting out as a stand-up comic, he got his first big break into stardom in 1985 with his role on Saturday Night Live as the anchor for "Weekend Update," SNL's fake news report. Having discovered many SNL stars to come over his 6 years with the show, he left in 2001 to pursue his TV host career. Throughout his career he has hosted three of his own shows: The Dennis Miller Show (1992), Dennis Miller Live (1994-2002), and Dennis Miller (2004-2005). He also had a brief stint as a color commentator on ABC's Monday Night Football from 2000-2002. He is currently hosting his own nation-wide radio show, The Dennis Miller Show, sponsored by Westwood One.

Dennis Miller was born on November 3, 1953 in Pittsburgh, Pennsylvania, where he grew up and graduated from Keystone Oaks High School in 1971. He attended Point Park University and majored in journalism. Miller started his career hosting a no-name show on Pittsburgh's local TV network in the early 1980s. He really got his start as a stand-up comic, however, playing such venues as Catch a Rising Star and The Comic Strip in New York, and Los Angeles's The Improv. It was not until 1985, however, that he got his first big break when he was noticed by Lorne Michaels at the Comedy Store and subsequently offered a spot on Saturday Night Live as the anchor of "Weekend Update." This gave him his first venue and launching pad for what would later become his signature rants: liberal and intellectual, with a very "stream of consciousness"-type delivery. In 1988, Dennis Miller starred in an HBO special entitled Mr. Miller Goes to Washington. This would be the first in an impressively long line of acting endeavors. Miller has appeared in numerous TV shows and movies over the years, but never played a leading role. He often appears as himself in these shows and movies, as in the 2005 hit movie Thank You For Smoking. In 1990, he released a comedy CD based heavily on this special entitled The Off-White Album, and another HBO special, Dennis Miller: Black & White, debuted shortly after the CD that same year.

Miller, during his time on SNL, is credited with the discovery of later SNL stars such as Chris Farley, Mike Meyers, David Spade, and Adam Sandler. In 1991, Miller left SNL to pursue a more illustrious and personal career as a Television host. In 1992 his first show, The Dennis Miller Show, boasting the "smartest monologue on television," aired. This was his first real medium in which we got to really experience his rants and political humor. However, due to time slot conflicts with other shows, he received low ratings and was promptly canceled just six months later. In 1994, he began hosting, writing, and producing his own weekly, half-hour show on HBO named Dennis Miller Live. The show remained on the air for a respectable eight years (1994-2002) and yielded an impressive five Emmy awards along with 14 nominations. The show is most notable due to its importance in really making Miller known for his rants. His opening monologue always ended in a "rant" where he unloaded on a subject of the day which would subsequently then be the primary topic for his guests and callers. This also gave way, in 1996, to a book appropriately titled The Rants, which quickly became a top-seller. In 2000, Miller auditioned for and was hired as the color commentator on ABC's Monday Night Football. He impressed audiences with his knowledge of the game, but his dry wit, intellectual superiority, and obscure references did not turn out to fit well with the otherwise alcohol-soaked, couch-potato attitude and viewer; he was fired after two seasons in 2002. As Miller himself said, after his firing, "I could see this coming more clearly than Fiver the Rabbit with reading glasses. Mr. Joe P. American apparently can't understand what I'm saying, and they've been complaining about it. What do you expect from a bunch of modern-day, Jurgus Rudkuses whose heads are so far up into their nether-regions that they need to use a proctosigmoidoscopy for a reading light?" Miller got another shot at sports TV when in 2007 he began working for Versus as a host for Sports Unfiltered.

After September 11, 2001, Dennis Miller's political humor, once equally bashing of every aspect and side of politics, veered to a much more conservative view. As Duncan Curries describes it on National Review Online, "Once considered a cynical, irreverent lefty who saved his harshest comedic diatribes for Republicans and Rush Limbaugh, Miller has ostensibly become a hawkish conservative." This, alienating a portion of his audience while dampening his humor, was the primary downfall of his next TV endeavor, Dennis Miller. The show debuted on CNBC in 2004, but was pulled in 2005 due to low ratings and a lack of audience. In 2007, Dennis Miller entered into a contract with Westwood One to host his inaugural radio talk show, The Dennis Miller Show. Within this daily 3-hour show, Miller talks with celebrity guests and call-ins and gives his own thoughts on the topics, and which usually transform into his signature rants. His talk radio show has proven popular, reaching the ears of 1,740,000 weekly listeners, and he has been ranked 33rd among the country's top radio talk show hosts of 2011. His website, dennismillerradio.com, provides live coverage of his talk show, as well as videos, polls and more.

Dennis Miller is a very strong-willed, independent, and opinionated person. His signature humor, delivery, and rants have been a constant with him since his debut on SNL. Also, in reminiscence of his SNL days, all of his subsequent TV shows have included a news portion with similar commentary. Despite his debacles and follies in the past with shows, he has remained a constant source of entertainment for the American public, and a favorite comic among the crowd, ranked 21st on Comedy Central's 100 Greatest Stand-Ups of All Time. His quick wit and political humor, along with his rants, have brought him fame and fortune, and is undoubtedly what he will be doing until the day he dies, and what he will be remembered for.