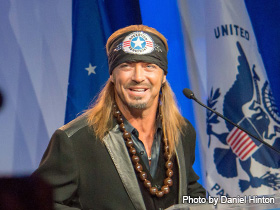 Bret Michaels was the lead singer for the successful metal band, Poison.

Rock star Bret Michael Sychak was born March 15, 1963, in Butler. He was a very independent child that enjoyed a lot of fun adventures that usually led to some form of trouble. Though he was born in western Pennsylvania, he was raised in Mechanicsburg near Harrisburg, where his love for rock blossomed and he adopted the name "Bret Michaels." Fascinated by bands such as AC/DC and Aerosmith, he decided to start his own band, leading to his success as the lead singer in Poison. Through his many travels and battles with Type II diabetes, Bret continued to search for his Rock of Love, but came up short.

Bret Michael Sychak was born in Butler, Pennsylvania, on March 15, 1963, but grew up in Mechanicsburg, near Harrisburg. He spent most of his time listening to rock music, riding motorcycles and causing havoc wherever he went. Michaels was always active, getting in and out of trouble and even admitting that he was arrested a few times, mostly for curfew violations. He has always been aggressively independent, never having men in suits and ties tell him what to do.

Michaels earliest musical influences were the rock groups Kiss, AC/DC, Sweet and Aerosmith. He began his performing career with a basement band called "Laser," eventually moving on to "Spectres," which he formed with Rikki Rocket, a long time childhood friend. He proclaimed that his main goal was to have his mom and dad hate their music. In 1983, under the band name "Paris," the group starting playing the club circuit before finally stumbling on the name "Poison," which ultimately became the name of their band. They never imagined that fame and fortune were in their sights. Selling over 25 million records, with 15 songs hitting the top 40, Poison became one of the most proclaimed rock bands of their era. "Every Rose Has its Thorn" was their number one hit, and continues to be Poison's claim to fame.

Michaels may have had his share of fun in the early days, but he has also had to contend with diabetes, a terrifying disease which forces him to monitor his blood sugar and take insulin shots on a daily basis. He went into insulin shock three times when he was young and had to go the hospital in an ambulance. It was a very scary experience for him and his family. People have often mistaken him for a heroin addict because they would come in contact with syringes in back stage trash cans or in the hotel waste baskets. Once in a Portland, Maine, hotel, the maid came to clean the room and saw the syringe in the trash basket. She called the police because she thought he was a junkie and she was going to get AIDS because she touched the basket. Michaels had to go to the police station and prove that he was not in fact a junkie, but a sufferer of Type II Diabetes. In May 1994, Michaels was in a horrible car accident when driving his Ferrari. He passed out behind the wheel of the car, because his blood sugars were low and crashed right into a telephone pole going roughly 80 m.p.h.. He was not about to let the disease prevent him from pursuing his goals or his active lifestyle. Michaels was determined to lead as normal a life as he could, which he accomplished through constant support from his friends, family and taking as good of care of himself as he could, he never let it stop him from doing anything.

Describing his younger self as a loner, Michaels has always been able to do things by himself, which ultimately helped him when it came to writing songs. An intense, hardworking individual, he professes to being attracted to women who are ambitious, who know what they want. He met his ex-girlfriend, Susie Hatton, backstage at a Poison show. She became a recording artist and Michaels wrote most of the material for her and produced her well-received 1991 Giant Records debut.

As the main songwriter for Poison, Michaels is a competent guitarist and pianist, which allows him to cover more musical ground and experiment with a variety of sounds that a mere vocalist would not be able to do. But even though he is responsible for most of the song writing in the group, he does not view the rest of Poison as his backing. They split everything four ways between Bret Michaels, C.C. DeVille, Rikki Rocket, and Bobby Dall, and no one was the designated leader. But cracks in the band's foundation were already beginning to surface. Tensions between Michaels and DeVille were threatening to tear the band apart. A fist fight broke out between the two in New Orleans. The conflict continued in 1991 at the MTV Music Awards, where they had a fistfight backstage. DeVille departed the band that night. It became clear to everyone that things were about to change. In late 1998, DeVille and Michaels made up, and in the summer of 1999, the original four members hit the road for the first time together in eight years. And in true Poison tradition, the stage show was a spectacle.

Michaels regularly works out to keep himself in top shape, which he has to in order to maintain, the intensive touring schedule that Poison was renowned for. Of course, female Poison fans do not mind it either, finding the front man one of the sexiest rockers around. He is very modest and laughed the situation off by saying that if anyone saw him in the morning, he wouldn't be in the top 500. This down-to-earth attitude is equally evident in the way he treats and talks about Poison's fans, whom he feels are on an even level with the band.

Although he is an experienced performer, Michaels admits that he and the rest of Poison still get more nervous when playing live, but proclaims that it gives them more energy than any other band in the world. Despite having sold millions of records all over the world, he is still not completely satisfied with his achievements thus far, adding that he would like to expand musically, especially as a front man and a singer. He feels as if he has held back on some of the talents he has at being a front man, and each year releases some of those abilities, little by little through a particular song or songs on an album.

Bret Michaels has two daughters with Kristi Lynn Gibson: Raine Elizabeth Sychak, who was born on May 20, 2000, and Jorja Bleu Sychak, born May 5, 2005. As of 2007, Michaels and Gibson are separated and share custody of their children. He has recently had trouble finding that one and only love of his life, but got some help with a reality TV show on VH1 called Rock of Love. The season featured 20 women competing for Michaels' heart. The women were tested on their devotion to him and their love and understanding for rock-n-roll. To help narrow the field, Michaels put these women through various challenges. Those who won these challenges joined Michaels on some wild and exclusive excursions, while those who could not win were escorted out. After receiving her VIP pass, Jes returned it proving that she could not handle Michael's rock star lifestyle. The tour continues for Michaels and 20 different single females looking to rock his world next season.

Even though he was raised near Harrisburg (Eagles Country), Michaels is a Pittsburgh Steelers fan. He has a personalized guitar bearing the team's logo, and played the national anthem at Three Rivers Stadium. His favorite player was Jack Lambert, and Michaels has always been a member of the fan club "Lambert's Lunatics." Michaels also owns a metal store in Shakopee, Minnesota, called "Bret Michaels Steel Emporium," which contains various hard-to-find Poison memorabilia. He and actor Charlie Sheen established a film production company, Sheen/Michaels Entertainment, which produced the movie A Letter From Death Row, which Michaels wrote, directed and starred in, as well as No Code Of Conduct the same year. Their company also produced the 1998 feature film Free Money, starring Marlon Brando and Mira Sorvino. Until Michaels feels that this rock star lifestyle has caught up with him, he will continue to work hard to strive for his goals and go down as one of the greatest rock and roll stars ever.