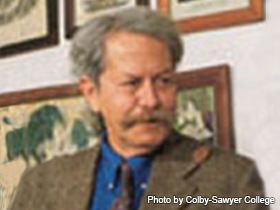 An English professor at Colby-Sawyer College, McMahon has written several books of poetry and was the editor of Flowering After Frost.

Michael McMahon was born in Palmerton, Pennsylvania on March 10, 1943. Educated at Colby College in Maine and the University of Scranton in Pennsylvania, he established himself as a poet and editor. McMahon has been published in many small literary magazines during his lifetime. He has been awarded the Nebula Award, Pushcart Poetry Award, Dark Horse Poetry Award, and the Aspen Literary Award.

Born in Palmerton, Pennsylvania in 1943 to Edward T. and Romaine (Peters) McMahon, Michael McMahon received his Bachelor of Arts degree from Colby College in Maine in 1963. In his youth, he worked many different jobs, including farm laborer and bartender. In the same year he graduated from Colby College, he wed art director Patricia M. Dishman. Together, the couple had three children, Michael, Erin, and Sean Patrick. He later received his Master of the Arts from the University of Scranton in Pennsylvania in 1965.

McMahon has had many poems published in small literary magazines, such as Flowering after Frost: An Anthology of Contemporary New England. His poetry and writings focus primarily on American literature and contemporary culture. In 1975, McMahon was awarded the Nebula Award for his poem "On Turning Down a Clear $75 a Week." In 1976, he was awarded the Pushcart Poetry Award, the Dark Horse Poetry Award, and the Aspen Literary Award, which all award prizes to publications of small presses.

When asked about his works, McMahon has commented, "I wrote poems about living in small rented place, ruined farm country, a land where winter lasts for six months, a north country that has nothing to do with the compass direction. I have worked as a tennis pro, a farm hand, a bartender, a jazz and rock organist, a butcher, an advertising copywriter, and assistant innkeeper, a house painter, a grocery clerk, and a caterer in the last eight years. Somehow, in retrospect, it does not seem worth it."