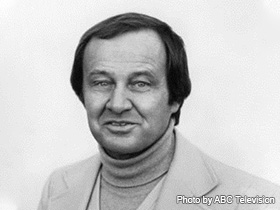 Sportscaster Jim McKay is best known for his Olympic coverage and for hosting ABC?s Wide World of Sports.

Born in Philadelphia, Pennsylvania, James Kenneth McManus (Jim McKay), moved to Baltimore Maryland at the age of 13. After receiving a degree from Loyola College, McKay began his career working for the Baltimore Sun. When he moved to New York, his career really began as he started working for CBS. He is well-known for his work on the show Wide World of Sports as he hosted the show for 37 years. McKay also was well-regarded for his work in Munich during the Olympics, he stayed up for 16 straight hours broadcasting the hostage situation. He received several awards throughout his career. He died on June 7, 2008 in Maryland.

Jim McKay was one of the original sports personalities to be well-known. When interviewed about Jim McKay, George Bodenheimer, President of ESPN and ABC sports had this to say, "He meant so much to so many people. He was a founding father of sports television, one of the most respected commentators in the history of broadcasting and journalism." James Kenneth

McManus, better known as Jim McKay, was born in Philadelphia, Pennsylvania on September 24, 1921. At the age of 13, McKay moved to Baltimore, Maryland. McKay would later attend college in Maryland; he graduated from Loyola College, class of 1943. 1943 is also the same year he married his wife Margaret Dempsey, with whom he later had children, Mary Edwina and Sean Joseph. At Loyola College, McKay left his mark editing the school paper, The Greyhound, and serving as class president. College President Brian Linnane, S.J of Loyola College, said about McKay "I know of few individuals who represent the values and ideals of this institution as well as Jim "McKay" McManus." McKay left a special mark wherever he went, even in his younger years.

After completing school, McKay joined the Navy. He spent 1943-1946 in the Navy where he eventually worked his way up in rank to captain of a minesweeper mission escorting convoys from Trinidad to Brazil. Upon completing his tour of duty in the Navy, McKay immediately received a job from the Baltimore Sun as a police reporter. This job eventually led to McKay's career as a broadcaster and sportswriter. McKay's was the first voice ever heard over the televisions of Baltimore.

In 1950, when McKay moved to New York, his career really took off. There he hosted a 90-minute variety show for CBS. CBS television executives told him that he would be known as "Jim McKay" and that stuck with him for the rest of his life. This variety show brought McKay much more work for CBS. He took a plethora of jobs as a weatherman, public-affairs moderator, game show host, and sportscaster.

1961 will forever be known as the changing point in McKay's career, the year he began hosting ABC's Wide World of Sports. It is here where McKay's famous line "the thrill of victory and the agony of defeat," originated. ABC's Wide World of Sports is one of the longest running shows in television history, McKay hosted the show for 37 years (1961-1998). This long tenure is truly incredible because this show, originally entitled World of Sports, was only supposed to be a 20-episode summer special and it barely even survived for the summer as it received awful ratings. However, McKay traveled to over 55 countries, covering over 120 sports covering sports from football to frog jumping. ABC's Wide World of Sports pioneered many aspects of sports viewing that today now taken for granted; things such as instant replay, slow motion and radical camera angles on top of cars and under water. Curt Gowdy Jr., producer for Wide World of Sports, took great pride in being the pioneer of such technological advances, saying, "we don't just cover the sport, we center around the people who make the sport." ABC's Wide World of Sports became a staple show for viewers around the nation. Mike Tirico, well-respected broadcaster and writer for ESPN, said in an obituary on ESPN, "dinner wasn't served on Saturday night until 'Wide World of Sports' was over." The Wide World of Sports shaped America's love for sports forever.

Though well-known for his time on Wide World of Sports, McKay will forever be linked with the Olympic Games. He broadcast 12 Olympic games from 1960 through 2002. McKay's most famous Olympic coverage was certainly the 1972 Games and the tragedy at Munich. This "Munich Massacre" claimed the lives of 11 Israeli athletes and coaches by a Palestinian terrorist group, "Black September." As the attacks began, McKay was enjoying his only day off in the sauna back at his hotel. When he heard the news, McKay quickly ran to the studios. He rushed there so fast he accidentally wore his bathing suit under his suit pants. McKay broadcast the hostage situation for 16 consecutive hours on air. McKay was the only voice on the story for America for that time, as he kept the American people updated on this unfortunate event. When the 11 athletes were murdered McKay said famously: When I was a kid, my father used to say our greatest hopes and our worst fears are seldom realized. Our worst fears have been realized tonight. They have now said that there were 11 hostages. Two were killed in their rooms this morning -- excuse me, yesterday morning. Nine were killed at the airport. They're all gone.

After completing the broadcast, McKay received a telegram from his former CBS colleague, legendary newsman Walter Cronkite, saying, "Dear Jim, today you honored yourself, your network and your industry." For his extraordinary coverage at the Munich Olympic Games, McKay became the first ever sportscaster to win an Emmy Award for news coverage. For that news coverage he also received another sports Emmy Award and the prestigious George Polk Memorial Award.

One of McKay's favorite pastimes was horse racing. He broadcast many races throughout his career including all three of the Triple Crown races (The Kentucky Derby, The Preakness Stakes and Belmont Stakes). McKay was extremely passionate about horse racing. In 1987, he was elected into the Jockey Club; horse racing's governing body. Until the time of his death, he and his wife, Margaret, remained supporters of horse racing throughout Maryland, creating the Maryland Million, a horse racing spectacular for Maryland thoroughbreds.

In his career, McKay received 12 Emmy's and many other awards. He was passionate, loved his job, and was destined to be in this industry. In his autobiography, McKay wrote, "All I knew was that I wanted to be a newspaper reporter or a radio sports announcer." This passion is what made Jim McKay the special person he was.

Broadcaster and writer Bob Costas, when interviewed after McKay's death said, "He had a combination of qualities seldom seen in the history of the medium, not just sports." On June 7, 2008, when Jim McKay died of natural causes in Maryland, America lost a great broadcaster and great person. He was survived by his daughter, son and wife of 65 years. It could not have been more appropriate that he passed away in Maryland, the state he left his mark on forever.

The list of people on earth who are universally admired for their work and just as universally admired for the lives they've led is a very short one. McKay is on that short list. He wasn't just a class act, he practically invented the notion of the class act on television. His are shoes that can't be filled. They were uniquely his, and even those who might have aspired to wear them will always understand that.