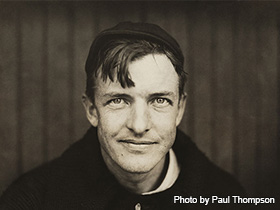 Factoryville native Christy Mathewson pitched 373 winning games and was a charter member of the Baseball Hall of Fame.

Christopher Mathewson was born August 12, 1880, in Factoryville Pennsylvania. He attended Bucknell University and followed his collegiate career by becoming a professional baseball player. He played for the New York Giants for 16 years and then played and coached for the Cincinnati Reds for one year. After leaving baseball he enlisted in the army where he would encounter hazardous materials and develop tuberculosis. After his return from the military, he went back to baseball and coached the New York Giants from 1919-1920. He then moved to Saranac Lake, New York where he passed away in 1925.

Christopher Mathewson was born on August 12, 1880, in Factoryville, Pennsylvania. He was the son of Gilbert B. Mathewson and Minerva J. Capwell. As a child growing up, he attended Keystone Preparatory Academy and then went on to attend Bucknell University in 1898. While he was enrolled at Bucknell University, he was class president and an outstanding baseball player, as well as a talented football and basketball player. After his schooling was complete, Christy earned his first job as a professional baseball player. The first team that he played for was located in Taunton, Massachusetts. During his early years when he was playing baseball for many clubs, Christy Mathewson married Jan Stoughton and the couple had one son named Christopher Mathewson Jr.

After two years of traveling between ball clubs, Christopher Mathewson made his Major League debut in 1900 as a right-handed pitcher with the New York Giants. He was a successful pitcher and many of his achievements were accredited to the pitch he made famous, the "fade-away." The "fade-away" was described by other players as a pitch that seemed to be coming down the middle of the plate and that at the last second breaking in on right handers, causing the opposing batters to misinterpret their swing. During his career in the majors, he achieved a record of 373-188 and appeared in four World Series, winning one. He holds the modern day record for most wins in a season at 37 and he also holds the record of three shutouts in the World Series over a five-day period. According to his former manager John McGraw, "Christy was the greatest pitcher to ever play the game." Christy Mathewson was inducted into the National Baseball Hall of Fame in 1936 along with Ty Cobb, Babe Ruth, Walter Johnson, and Honus Wagner. This group was the inaugural class of baseball players inducted into the Hall of Fame and were given the name the "Five Immortals" by the Baseball Writers' Association of America. As Christy began to close in on the end of his baseball career, he began a new endeavor in his life as an author. He wrote books on baseball and some of them were autobiographical in nature. For instance, one book by Mathewson, Pitching in a Pinch, gave a detailed description of his experience and views of pitching in the major leagues. He also focused some of his works on children's stories. His best known children's works were called the "Matty Books" and comprised of four books. One of the books was entitled First Base Faulkner and tells a tale of a boy joining a baseball team and winning a game by turning an unassisted double play.

After 16 seasons with the New York Giants, the coach of the Giants, John McGraw, traded Christy to the Cincinnati Reds so that he could coach as well as play in the majors. In 1918, one year removed from baseball, Christy enlisted in the army where he served and was captain of the Gas and Flame Division in France. During his time in the army he was exposed to poisonous gas and was forced to leave the military. When returning home from his service, he was diagnosed with tuberculosis. This disease would continue to affect him until his death, but he returned to baseball as a manager in 1919. He coached the Giants until 1920 and then settled in Saranac Lake, New York to recover from his tuberculosis. Mr. Mathewson died October 7, 1925, in Saranac Lake, New York.