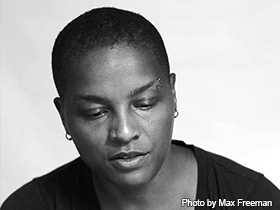 Award-winning poet, Dawn Lundy Martin, cofounded the Center for African American Poetry and Poetics (CAAPP) at the University of Pittsburgh.

At the time of this writing, Dawn Lundy Martin is a University of Pittsburgh professor and the Director of the Center for African American Poetry and Poetics (CAAPP), which she cofounded with poet Terrance Hayes in 2015. She is the author of multiple poetry collections, including Life in a Box is a Pretty Life (2015) and Good Stock Strange Blood (2017). In 2018, her poem "[When the bed is empty…]" – from Discipline (2011) – was selected for publication by the Public Poetry Project of the Pennsylvania Center for the Book. Martin is also a cofounder (with Amy Richards, Rebecca Walker, and Catherine Gund) of the national feminist organization, Third Wave Foundation, and cofounder (with Duriel E. Harris and Ronaldo V. Wilson) of the performance group, Black Took Collective.

From a young age, Dawn Lundy Martin has had an interest in language. "My mother read to me in a very persistent, consistent way, whether I wanted it or not," she tells Ron Charles of the Library of Congress with a proud chuckle. She credits the poetry of the 19th Century writer Paul Laurence Dunbar for stoking her curiosity for language.

"…[Dunbar] wrote both in conventional forms and conventional English. And he wrote in Black vernacular. And when I was a kid, those poems that were written in the Black vernacular were the most exciting to me, because I thought they were funny, and it was funny to hear my mother read them. … It certainly wasn't our kind of like everyday speech. …so to have that coming up under the surface of my experience attracted me to language."

Martin began writing her own poetry as a freshman in college while earning her BA from the University of Connecticut. Her growing interest in feminism and gendered experiences also led her to create a young feminist activist foundation called the Third Wave Foundation with cofounders, Rebecca Walker, Catherine Gund, and Amy Richards.

"When I was a baby poet," Martin tells Ron Charles of the Library of Congress, "I was working in the feminist movement … [and] started an organization called The Third Wave Foundation. … The goal was to refresh and reinvent feminism. …We wanted it to be a multi-gendered feminism, so that young people would get excited about women's issues, excited about gender issues…" The foundation focused on recruiting new voters and raising and donating funds directly to feminist causes, such as emergency abortion funds and scholarships for young women and transgender activists. Today, Third Wave is a national organization operating as a donor-advised fund (DAF).

While her first collection, A Gathering of Matter/A Matter of Gathering (2007), emerged from her feminist interests, Martin tells Julie Marie Wade of The Rumpus that "these poems were involved in questions of feeling whole, negotiating sexual trauma, and speaking to what has been lost forever."

She says, "I've always been a person who feels most energized when I am both creating art and working toward social change."

Martin went on to earn her MA from San Francisco University and a PhD from the University of Massashusetts – Amherst. While a professor at the University of Pittsburgh, she cofounded the Center for African American Poetry and Poetics (CAAPP) with Terrance Hayes in 2016.

Her Pittsburgh profile describes CAAPP as a "A creative think tank for African American and African diasporic poetry and poetics [that] brings together a diversity of poets, writers, scholars, artists, and community members who are thinking through black poetics as a field that investigates the contemporary moment as it is impacted by historical artistic and social repressions and their respondent social justice movements."

Her second collection, Discipline (2011), won the Nightboat Books Poetry Prize and ruminates on the physical body and its communion with pain and loss. The poem "[When the bed is empty…]" from this collection was selected for publication by the Public Poetry Project of the Pennsylvania Center for the Book in 2018. At this time, other collections by Martin include Good Stock Strange Blood (2017), selected for the prestigious 2019 Kingsley Tufts Poetry Award, and winner of a Lambda Literary Award for Lesbian Poetry, Life in a Box is a Pretty Life (2015), with new works forthcoming.

In addition to poetry, Martin is also a multimedia artist, having written a libretto for the 2014 video installation opera Good Stock on the Dimension Floor and showing her video installations in art museums. She has also been a member of the global artist collective, HowDoYouSayYamInAfrica, and is a cofounder (with Duriel E. Harris and Ronaldo V. Wilson) of the performance group, Black Took Collective.

At the time of this writing, Dawn Lundy Martin continues to be a professor and the Director of CAAPP at the University of Pittsburgh.

"For me," she tells Charles. "[T]he act of writing is a hopeful act. Even if the content of the poems sometimes leans towards our most basic, darkest tendencies. […] Connecting with people around a certain set of experiences is hopeful. […] The hope is that transforming culture in art can be a sort of social justice that's happening insidiously."