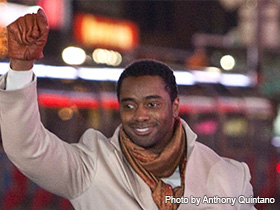 Running back Curtis Martin retired after 12 years as the NFL's fourth-leading rusher.

Curtis Martin was born on May 1, 1973, in Pittsburgh, Pennsylvania. He was a running back in the NFL for 12 years. Martin spent his first three seasons with the New England Patriots and the last nine with the New York Jets. By the end of his career in 2007, Martin had accumulated 14,101 rushing yards, which placed him at fourth on the NFL's all-time rushing leaders list. Martin was born and raised in Pittsburgh, Pennsylvania. He attended Taylor Allderdice High School in the city and later attended the University of Pittsburgh on a football scholarship. Martin has solidified himself as one of the NFL's best running backs of all-time and is a future Hall of Fame inductee.

Curtis Martin was born on May 1, 1973 in Pittsburgh, Pennsylvania. When Martin was three-years-old, his father abandoned the family and left his mother, Rochella, to head the family on her own. After moving in and out of various neighborhoods throughout the city, the Martin family finally settled in the Point Breeze section of Pittsburgh. This area of the city was rough, but it was all that the family could afford at the time. Martin attended Taylor Allderdice High School in the Squirrel Hill section of Pittsburgh, but did not play football for the school until his senior year. After many of Martin's friends were killed on the streets, his mother, not wanting him to have the same fate, urged him to play football. Martin reluctantly agreed and his famous football career began.

It did not take a long time before Coach Mark Wittgartner, the head football coach at Taylor Allderdice High School, knew that Martin was something special. "He had natural abilities far and above backs I had had before," Wittgartner said. During his first and only year of high school football, Martin ran for 1,705 yards and scored 20 touchdowns. That year he was the leading rusher in the City League and in the regional conference. His accomplishments also attracted the attention of many college football powerhouses such as Miami (FL), Georgia Tech, The Pennsylvania State University, Tennessee, Maryland, and University of Pittsburgh. Martin took official visits to University of Pittsburgh, Georgia Tech, and Miami (FL) during his senior year. Family was always important to Martin, and in the end he chose to attend University of Pittsburgh because it was so close to home where his friends and family could watch him play.

When Martin arrived at the University of Pittsburgh, he was immediately compared to the former University of Pittsburgh great, Tony Dorsett. Martin was expected to be the player who would turn the University of Pittsburgh football around, but things did not turn out as planned. During his freshman year, Martin suffered a foot injury that kept him off the field and his sophomore year was cut short by an Achilles' heel injury. Finally, in his junior season, Martin displayed the talent that had drawn so much attention from University of Pittsburgh fans only two years earlier. That year Martin ran for 1,132 yards behind an offensive line that was not impressive. Martin began his senior season well, running for 251 yards against Texas in the season opener. The next week, against Ohio University, Martin's injury troubles revisited him as he was taken out of the game with an ankle injury which would bother him the rest of the season. Plagued by injury after injury, Martin's college career was merely mediocre. Martin had the opportunity during his senior season to apply for a medical redshirt year of eligibility and stay in school for another year, but instead opted to enter the 1995 NFL draft. The fans and media thought that Martin was making an unwise decision, saying that he would be a low-round draft pick if he even got drafted. Little did they know what kind of history Martin would make in the National Football League.

Drafted in the third round of the 1995 NFL Draft by Bill Parcells and the New England Patriots, Martin got right to work in his first year as a pro. After rushing for 1,487 yards and 14 touchdowns, Martin earned the honor of being the AP Rookie of the Year and he never looked back. Martin stayed with New England for two more seasons, during which he compiled 2,312 rushing yards and 18 touchdowns. In 1998, Martin was snagged by the New York Jets as a restricted free agent. Martin spent the better part of his career in New York. His best season ever came in 2004 when he rushed for a league best 1,697 yards and also scored 12 touchdowns. After that season, Martin passed the likes of Tony Dorsett, Jim Brown and Erik Dickerson on the league's career rushing list and became a shoe-in for the Hall of Fame.

The next season however proved to be Martin's worst and last. During Game 2 of the season, Martins' right knee was accidentally kicked by an opposing player and two weeks later it was kicked again. That season Martin finished with career lows in almost every category and called it a season with four games to go. After his last game of the season, Martin underwent arthroscopic surgery on his right knee. Although he worked out all off-season to prepare for the next year, in the end the pain from his knee was just too great. Martin spent that season on the Jets' Physically Unable to Play list and officially retired on July 26, 2007.

During Martin's illustrious career he rushed for 14,101 yards (4th all-time), carried the ball 3,518 times (3rd all-time), racked up 17,430 total yards from scrimmage (7th all-time), scored 100 touchdowns (tied for 20th all-time), and compiled 57 regular season 100-yard rushing games (7th all-time). Upon Martin's retirement, NFL Commissioner Roger Goodell said in a statement, Curtis Martin represents everything an NFL player should be. He overcame many challenges to enjoy an outstanding career as one of the best running backs in the NFL. His on-field accomplishments were matched by an equally strong commitment to serving his community and being a positive role model off the field. We know that Curtis will continue to be successful and represent the NFL well as he moves into his next career."

Curtis Martin will be remembered as a man who loves his family and friends, a man who cares about his community, and a man who became one of the best running backs to ever play in the NFL.