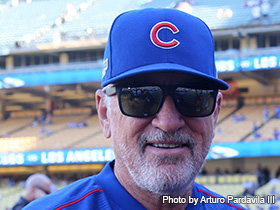 Baseball coach, Joe Maddon was born in Hazelton, Pennsylvania, and led the Chicago Cubs to their first World Series victory in 108 years with their 2016 win.

Baseball coach, Joe Maddon was born in Hazelton, Pennsylvania, and spent over 30 years with the Los Angeles Angels of Anaheim organization working his way up to a major league bench coach position. Under manager Mike Scioscia, Maddon helped coach the Angels to a 2002 World Series win. He went on to manager the Tampa Bay Rays and then the Chicago Cubs, leading the Cubs to their first World Series victory in 108 years in 2016. Maddon has spearheaded significant community initiatives, including Thanksmas, which provides food and gifts to those in need, and the Hazelton Integration Project (HIP), created to encourage cultural unity in his hometown, where he continues to keep close ties.

"A shot and a beer, the Hazelton way," is what Joe Maddon requested in celebration of his opening night as Chicago Cubs manager in 2015. Chris Hine of the Chicago Tribune explains that Maddon's beverage request is "a nod to the blue-collar town built by immigrants tucked away in the hills of northeastern Pennsylvania where coal miners would frequent neighborhood bars after their shifts."

Joseph (Joe) John Maddon was born in Hazelton, Pennsylvania to Joseph Anthony Maddon, "a gentle, quiet, hard-working plumber [of Italian descent] who died in 2002 at age 82," according to Pahoops writer Marc Topkin, and Albina (Beanie) Klocek, a "dynamo" who was born in 1933 and continues to work four days a week at the classic Third Base Dugout Luncheonette, not far from the apartment on E. 11th Street where Maddon grew up. He is one of three siblings, a younger sister, Carmine Parlatore, and a brother, Mark.

"Their doors, hearts and lives were always open," Topkin says of the Maddon family. Along with his siblings, Maddon grew up among an extended Polish-Italian family and "an ever-widening circle of friends.

"The Maddon children didn't have much... Life was what it was, and you made the best of it."

Family friend, Dave Cassarella describes young Maddon as "a good boy. You know — All-American, apple pie, baseball, that whole bit? That's [him]." Having nicknames growing up was common in their neighborhood, and Maddon was often referred to as the Monsignor or Saint Joe for his straight-laced behavior and reluctance to curse.

In his college years, he played baseball and football for Lafayette College, and then was later signed as a catcher with the Los Angeles Angels of Anaheim in 1975, according to Will Osgood of FanSided online. He later held positions as a scout, minor league roving hitting instructor, and manager within the Angels' system "before taking his rightful spot as bench coach for the major league squad" in 1996. While Maddon served as bench coach under Mike Scioscia's management, the Angels won the 2002 World Series against the San Francisco Giants. Later, Maddon went on to manage the Tampa Bay Rays (2006-2014), leading them to four post-season appearances (2008, 2010, 2011, 2013) and an American League Pennant (2008).

"When I look back," Maddon tells ESPN Senior Writer, Steve Wulf, my journey isn't about a small-town kid from Hazleton traveling around the country, but about the years I put in to get to this place in my life. Playing and finding out you're not good enough, managing in the minors, working in player development, coaching and learning from the best minds in baseball. The Angels were a superb organization that way. Preston Gomez, Larry Himes, Gene Mauch, Bob Clear, Terry Collins, Mike Scioscia -- they helped me get here.

He was named Cubs manager on November 3, 2014, and by 2015 set a franchise record for most wins in a manager's first year with 97 victories. On November 2, 2016, Maddon led the Cubs in their first World Series win in 108 years, defeating the Cleveland Indians in the 10th inning of Game 7 with an 8-7 win. "It could not have been a more entertaining, difficult series to win," Maddon says in an article by CNN.com writer Jill Martin. "I think beyond all that, I want to believe and I do believe this is good for our game moving forward, that we're attempting to seize young fans and not just to play the game, but to be fans of the game."

Michelle Bearden of the Tampa Bay Times describes Maddon's management style as unconventional, exemplified by his themed road trips (e.g. an overnight flight where everyone wore pajamas) and quotes from Dr. Seuss to motivate his players. He credits his time spent cycling up to 100 miles a week for generating his best ideas. He also takes on a more liberal stance on team policies, according to ESPN.com writer Jesse Rogers. "If you think you look hot, you wear it," Maddon says on dress code policy. "I've always rallied against the fact that [the] previous generation really frowns upon non-collared shirts, which I've never understood. ... The $5,000 suit on the airplane ride makes no sense to me." He often gets teased by family about his own sense of style, "his spiked gray hair, the funky retro glasses and the California-cation of his lifestyle - sipping wine, watching his diet and sporting what teenage cousin Autumn Mishinski called the 'Armani skier' look," per sportswriter Topkin.

Maddon is known for popularizing one particular article of clothing: the "Try Not to Suck" t-shirt, quoting a piece of advice he'd given to Javier Baez in jest on Baez joining the Cubs from the minor leagues in 2015. The quote became a catchphrase at Cubs' practices. "We went down to spring training and we made shirts for everybody," Joe Ferro tells WGNtv.com writer Mike Lowe. Ferro and his partner Jacob Chandler are die-hard Cubs fans and owners of the baseball apparel company Korked. "Try Not to Suck" t-shirt sales benefit Maddon's Respect 90 Foundation, "which provides Chicago's inner city children and young adults with opportunities for betterment," according to USA Today sportswriter Nate Scott. At the November 4th Grant Park Celebration of the Cubs World Series victory, Maddon appeared in the aptly redesigned t-shirt: "We Did Not Suck, 2016."

Beyond the field, Maddon is recognized as a tireless advocate for community comradery and service. In 2006 he developed Thanksmas for the Tampa Bay area, a program that is now a weeklong volunteer event where meals and gifts are given to those in need, and in December 2011, he launched the Hazleton Integration Project (HIP) to promote unity in his hometown in response to cultural tensions. "I really honestly didn't know what to think [of the cultural tension there] because I wasn't 'boots on the ground," Maddon tells Hine. "My initial reaction at that time, being so pro-Hispanic, I just needed to find out what was really going on. Why are we attempting to push these people away? Why are we pinning all the problems of this area on them?

"To Maddon, the key was getting the newcomers and the longtime residents to interact," Hine's article explains. "So he and others formed [HIP] with a mission to promote positive relationships with the Hispanic population through community activities." HIP opened a Hazleton Community One Center in June 2013 and has served over 1,000 residents (mostly children) since, according to Cubs.com. Over 30 programs cover a variety of interests — including basketball camps, archery lessons, and family yoga — all with the aim of bringing people together.

"It's a lot like a baseball team, about developing and creating relationships," Maddon says of bridging differences. "Everybody is looking for complicated answers... But actually meeting people, that's the key more than anything we can possibly do."

According to Topkin, Maddon is often overwhelmed and humbled by the admiration he receives. "He was taken aback when they named the new Hazleton Area High baseball field for him in 2003, requesting that there not be a dedication ceremony." On May 12, 2009, the Pennsylvania House of Representatives honored Maddon's accomplishments and dedication to his hometown. He was also inducted into Lafayette's Hall of Fame (2009) and received an honorary degree from Lafayette College on September 2, 2010.

Those who know him note his good nature and positive attitude. His wife Jaye Sousoures' best-friend, Erin-lee Anderson says of the couple, "They're both down-to-earth people with a beautiful zest for life," according to Michelle Bearden of the Tampa Bay Times. The Sousoures and Maddon met at the Rossmoor Athletic Club in Seal Beach, California, in 1995 while each married to other people and became friends. Years later, after their marriages ended, they connected romantically and got engaged in June 2007. Maddon counts their union as the best thing that has ever happened to him. "I'm way over my skis with her," he says. "Sometimes, you just hit gold."

Between them they have four children — Sousoures has two boys, Ryan and Dylan; and Maddon has a son, Joe, daughter, Sarah, and two grandchildren from his first marriage to Bette Stanton.

Maddon maintains strong connections in Hazelton, making weekly calls to family and annual visits to the area, according to Topkin. He carves out time for hometown friends who visit him on the road and is known to seek out Hazelton residents in the stands before games. Carrie Muskat of MLB.com reveals that Chicago's Wrigley Field has even introduced a "Maddon approved" hoagie sandwich that uses his Aunt Geneva's recipe from the Maddon family's Third Base Dugout restaurant in Pennsylvania.