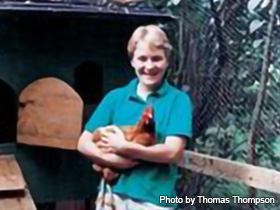 Megan Lloyd has used Pennsylvania scenes and her own farm animals to illustrate over 35 children's books, including Pioneer Church.

Megan Lloyd is an illustrator of children's books, including the highly popular The Little Old Lady Who Was Not Afraid of Anything by Linda Williams. After college, she worked briefly in a publishing house before beginning her career as an illustrator. She has illustrated over 40 books for children. She lives on a farm in rural Newville, Pennsylvania, with her husband.

Megan Lloyd was born on November 5, 1958, to Lois and Warren Lloyd in Harrisburg, Pennsylvania. Her parents were public schoolteachers who graduated from The Pennsylvania State University. Her father taught American history, and her mother taught both Music and Kindergarten. Lloyd herself attended The Pennsylvania State University for a year as a pre-law major, before deciding she wanted to illustrate children's books. She says she was prompted by her mother, who kept showing her picture books that she used in her kindergarten class. The books struck a chord with her, and she fell in love with the idiom of children's books, because they combined her love of books with visual aspects and the written word. To pursue her new interest, Lloyd transferred to Parsons School of Design in New York, New York. She graduated from Parsons in 1981 and worked for the next year as assistant to the art editor at Harper & Row in New York.

Her first contract as an illustrator was for the book Chicken Tricks, which prompted her to leave Harper & Row and move back to Pennsylvania. During her first two contracts she did antique paint restoration as a way to earn a living, but her work soon garnered enough interest from readers and publishers to enable her to illustrate full time. However, Lloyd's paint restoration work on the pulpit of an old church in Brickerville, Pennsylvania, inspired one of her most important and beloved works—Pioneer Church, by Carolyn Otto. Original art from the book was selected by the Pennsylvania Center for the Book to represent the Commonwealth as part of a two-year touring exhibit that focuses on the uniqueness of each state, as seen through the lens of children's book art.

Megan Lloyd says of her work: "I try to capture the essence of the story and expand on it, and to add things to the story that may not even be there. A well-written story will inspire ideas and images, and even subplots in my mind—things the author probably didn't intend." This mode of expression is embodied in the lively, playful style of her illustrations, part of what makes her unique and successful as an artist. She is able to read the story and let it trigger images that enable her to draw on her own personal experience. When speaking of her method, Megan Lloyd says: "Primarily I don't want to draw depictions of what the words are describing. If I only do what's written then there's no point in doing it. I like to expand and broaden what is given to me." Many readers enjoy Megan Lloyd's books for their realistic nature, but also for their ability to transport the reader with the pictures: "all of my books are placed in very real locations. Sense of place is very important to me and I try to put that sense of place in every book that I illustrate. If you are relating to the book, or going to a special place through the book, it's because I tried to do that; it was not accidental."

Megan Lloyd usually works on two different books simultaneously—all at different points in the design, creation, and publishing process. In addition to illustrating, she enjoys soap-making, rug hooking, weaving, painting, and caring for her many animals including dogs, cats, guinea hens, chickens, sheep, a cow, and a calf. She currently lives in rural Cumberland County, Pennsylvania, with her husband Thomas, an antiques dealer and shop owner, and the oft-used model for many of the men in her books. The director of the Pennsylvania Center for the Book, Steven Herb, is proud to be featured in Megan's How You Talk, a "Let's Read and Find Out Science Book" about speech, although he claims to be thinner than depicted.