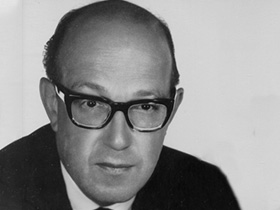 Songwriter Jay Livingston was born on March 28, 1915, in McDonald, Pennsylvania. Livingston attended the University of Pennsylvania where he would meet his long-time professional partner Jay Evans. The pair went on to compose many famous songs for movies, television, and even other musical artists. Their songs won various awards including three Oscars, each for Best Song, and seven other Academy Award nominations. The two were also honored with a star on the Hollywood Walk of Fame. Livingston died in 2001.

Songwriter Jay Harold Livingston was born on March 28, 1915, in McDonald, Pennsylvania, to Rose and Maurice Livingston. Livingston attended McDonald High School and then went on to attend the University of Pennsylvania where he majored in journalism. It was in college that he met Ray Evans, of Salamanca, New York. While in school, the two formed a jazz band called The Continentals. The band started out playing at fraternity parties, and went on to play on cruise ships where Livingston and Evans became aware of their talent for songwriting. After graduating from Penn in 1937, the two moved to New York City with hopes that they could make it big with their songwriting.

For years, Livingston and Evans struggled to gain notoriety from creating music, so they had to work odd jobs. Livingston took a job as a stand-by pianist for NBC Radio, while Evans worked as an accountant. Fortunately, they had their first success in 1941 with the song "G'Bye Now." The song was used in Ole Olsen and Chic Johnson's Broadway show Hellzapoppin'.

In 1942, Livingston was sent to fight in World War II. When he returned from combat a year later, he was convinced by Olsen and Johnson to move to California. Livingston was told that he and Evans had a better chance of becoming successful on the West Coast. Olsen especially advocated the move because he needed someone to drive his new car to his home in Hollywood, California. Once Livingston and Evans gave in to Olsen's request in 1944, they were allowed to live in Olsen's Hollywood home.

Paramount's music department signed the duo in 1945 after being highly acclaimed by singer and songwriter Johnny Mercer. Their first major hit at Paramount was the song titled "To Each His Own" for the 1946 film of the same name. The song was not sung in the film, but was recorded by artist Eddy Howard, whose version sold over 500,000 copies. "To Each His Own" was recorded by four other artists at the same time. These artists included Tony Martin, Freddy Martin, The Modernaires, and the Ink Spots. All five versions of the song made Billboard's Top Ten list in a single week. The list is a way the United States rates the most popular music singles in any given week.

At this time, Livingston was excelling in his personal life, as well as his professional life. In March 1947, Livingston married Lynne Gordon. Soon after, the two became parents of their daughter Travlyn.

Livingston and Evans continued their streak of writing hits when they created the classic Christmas song "Silver Bells." The song, introduced by Bob Hope in The Lemon Drop Kid, was initially titled "Tinkle Bells." The name of the song was changed after Livingston's wife explained that the word "tinkle" could also be used to describe a bathroom function. This was not the first time a title change was suggested for one of Livingston and Evans' songs. Evans' wife, Wyn, thought "Prima Donna," the original name of the Oscar-winning song "Mona Lisa," sounded bland. Instead, she suggested the song be named after Leonardo da Vinci's classic piece of art as an homage to the woman in the portrait who remained "mysterious to her lovers."

"Mona Lisa," was almost scrapped when legendary singer Nat "King" Cole refused to record the song. According to the British Film Forum, Cole was unable to hear Livingston and Evans' demo of the song over the phone because Cole's young daughter, Natalie, was making too much noise. Cole was persuaded by someone at Paramount and did end up recording "Mona Lisa." Still unhappy with the song after he recorded it, Cole ended up making the song a B-side to his song "The Greatest Inventor of Them All." Cole lucked out by releasing the song because it went on to be one of his greatest hits of all time and earned Cole, along with Livingston and Evans, an Oscar.

The songwriting duo were nominated for seven Academy Awards and took home three Oscars, each of which were winners in the Best Song category. The winning songs included 1948's "Buttons and Bows," from the Western comedy The Paleface, "Mona Lisa," from the 1950 movie Captain Carey, and "Que Sera, Sera (Whatever Will Be, Will Be)," from Alfred Hitchcock's 1956 film The Man Who Knew Too Much.

"Que Sera, Sera (Whatever Will Be, Will Be)" became famous after being used in Hitchcock's film and legendary after singer and actress Doris Day continued to use her recorded version for two of her later films, Please Don't Eat the Daisies and The Glass Bottom Boat, and for her 1960s show The Doris Day Show. Like Cole, Day initially refused to record the song. Day deemed "Que Sera, Sera (Whatever Will Be, Will Be)" a "kiddie song." She was, however, persuaded by her husband to record the song and it soon became the biggest hit of her career.

In addition to having many hits for films, Livingston and Evans are also behind many of America's most beloved television theme songs. The pair wrote the music and lyrics for the popular 1950s television show Bonanza, though the lyrics were never actually used. They landed the job through Livingston's brother, Alan, who was the vice president of programming at NBC at the time. Both the music and lyrics were used for Mr. Ed, a 1960s show about a horse who talked to his owner. While the pair's recorded songs rarely featured either Livingston or Evans' voice, Livingston remained the voice behind Mr. Ed's theme song after the studio rejected several other artists' versions of the song that it felt would not work.

Livingston hit a rough patch in 1991 when his wife Lynne passed away. He did, however, recover quickly, and went on to marry his second wife, Shirley Mitchell, of Los Angeles, in 1992.

Livingston and Evans were considered the last of a dying breed. In a 1997 interview with the University of Pennsylvania's The Pennsylvania Gazette, Evans admitted to loathing the popular music of the time. He went on to say, &ldquldquo;If [the great composer and pianist] George Gershwin were alive today, he'd be on the corner with a tin cup, because an art form [songwriting] has disappeared... It's a sad commentary on our society. We were the last of a golden age when songs made sense."

Warren Craig, author of The Greatest Songwriters in Hollywood, believed that Evans was correct in his sentiments that their talents did not have a place in ever-changing Hollywood. Craig reiterated Evans' statement in his book by calling Livingston and Evans, "the last great songwriters in Hollywood." The two have even been memorialized in Hollywood with a star at 7083 Hollywood Blvd on the well-known Hollywood Walk of Fame.

After a long and successful career, Livingston died of pneumonia at his home in Los Angeles, California on October 17, 2001.