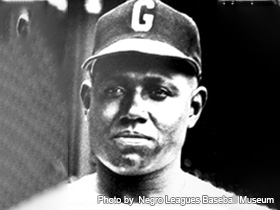 Buck Leonard, the "Black Lou Gehrig," played the majority of his career with the Homestead Grays.

Walter "Buck" Leonard was born on September 8, 1907, and he grew up in a small town in North Carolina. At an early age he played on multiple semi-pro baseball teams. At the age of 25 he joined the Negro National League, playing for the Grays of Homestead Pennsylvania. He helped lead them to multiple pennants and became one of the first blacks to be inducted into the Baseball Hall of Fame. He died on November 27, 1997.

Walter "Buck" Leonard was born on September 8, 1907, in Rocky Mount, North Carolina. He was the third child of John and Emma Leonard. He had three sisters and two younger brothers. His father worked as a railroad fireman and his mother stayed at home to take care of the family. As a boy, his parents used to call him "Buddy." However, his younger brother Charlie couldn't say "Buddy" and instead he called him "Bucky." The name stuck and was shortened to "Buck" when he got older.

Even from a very young age Leonard had a strong interest in baseball. Around the age of seven, he used to sneak over to the white part of town where he could peek through a ballpark fence and watch the game. Close to a year later, Rocky Mount got its own African American baseball team. Leonard went to every game and eventually became the bat boy. He joined his first baseball team at his school when he was ten-years-old. A year later his father died, and as the oldest boy, Leonard had to help pay the bills. He worked at the railroad and ended his schooling after the eighth grade, which was very common for African-Americans in those days.

While working for the railroad, Leonard spent his free time playing baseball. Over the course of about nine years, he played ball with a variety of semi-pro teams along the East Coast as a first baseman. While playing with the Brooklyn Royal Giants in 1934, he finally got a shot at playing professional baseball. With the help of Smokey Joe Williams, a retired pro ball player from the Negro Leagues, Buck earned a spot on the Homestead Grays.

The Grays played professional ball in the Negro Leagues. They were based in Homestead, Pennsylvania, a small mining town outside of Pittsburgh. Leonard instantly excelled on the team. In only his first few years, he began to get lots of recognition in the newspapers. By the third season he emerged as a leader on the team, hitting thirty-three home runs and batting .436. Leonard helped lead the Grays to second place in the Negro National League. The Grays really took off the following year when Josh Gibson joined the team. Gibson was one of the top home run hitters in the league. Leonard and Gibson quickly became the most dominant batting combination in black baseball. Leading the Grays to nine straight pennants between 1937 and 1945, they made their team the most celebrated team in the Negro Leagues. The two were often compared to Babe Ruth and Lou Gehrig.

Leonard maintained an overall career batting average of .341, just under Gibson's. He hit an average of 34 home runs between 1936 and 1943. Even at the age of 41 he led the Negro Leagues with a batting average of .395. During his career, Leonard was selected eleven times in the East-West All Star game, a major event in Negro Baseball. It was not until Leonard was 45 that he was offered a major league contract. However, he turned down the contract because, as told in his autobiography Buck Leonard: the Black Lou Gehrig, he said, "In 1952, I knew I was over the hill. I didn't try to fool myself." At the age of forty six he went on to play in the Class B Piedmont League, batting .333. Following that, he played in the Central Mexican League, where he retired at the age of 48.

Buck Leonard was married twice, once to Sarah Wroten, until her death in 1966, and then to Eugenia, whose maiden name is unknown. Even though he had two wives, Leonard never had any children. In 1972, he was one of the first black baseball players to be inducted into the National Baseball Hall of Fame. He died on November 27, 1997, in his hometown of Rocky Mount.