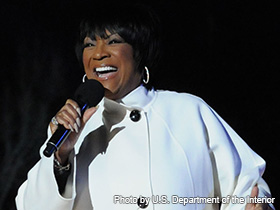 Noted R&B singer Patti Labelle had a number of hits including "New Attitude."

Patti Labelle was born on May 24, 1944, in Philadelphia, Pennsylvania. She discovered her passion for music and started her career in the music industry. First, she formed an all girl group, "the Ordettes," which soon became "Patti and the Bluebelles" and then "Labelle." This group gained notable success; however, Labelle broke out on her own after the group split up, and she won two Grammy Awards for her solo work. She also published several books and became an activist for many organizations. Currently, Labelle is still active in the music and acting industry and traveling on tour.

Patti Labelle (Patricia Louise Holt) was born on May 24, 1944. Labelle was the youngest of five children and had three sisters and a brother. She was born and raised in West Philadelphia, Pennsylvania, and she began singing in her church choir at Beulah Baptist Church at the age of 14. One of her school teachers told Labelle that she should start a singing group, and she did. In 1958, she formed a four-member girl group with her friend, Cindy Birdson, and they called themselves "the Ordettes." In 1959, Nona Hendryx and Sarah Dash joined the group after two members left. Two years later "the Ordettes" auditioned for Blue Note Records. They changed their name to "Patti Labelle and the Bluebelles" in order to convey their blues rhythm. Then, Labelle changed her name to Patti Labelle, meaning "the beautiful one" in French.

In 1962, the group had their first Top 40 song with the single "I Sold My Heart to the Junkman." They started performing at the Apollo Theatre in New York, where they captured their audiences' hearts. Throughout the 1960s they were considered one of the hottest touring acts in the country. In 1966, they signed with Atlantic Records. Labelle became engaged to a Temptation member, Otis Williams. However, their busy schedules forced them to call off the engagement. The next year Labelle's childhood friend, Cindy Birdsong, left the group to join an up and coming Motown group called, "The Supremes." Labelle did not talk with Cindy for eighteen years. In 1969, Labelle married Armstead Edwards.

Due to problems with their management, Labelle and the Bluebelles moved to England in 1970, where the group came into contact with promoter Vicki Wickham. When they returned to America the next year they came back with a new look, sound, attitude, and name. They were now called "Labelle." Their change was not received well by the American public, so they changed again, this time focusing on a more "rock and roll" image. Their group was often compared to Tina Turner, but "Labelle" was unique in its own way. Music critic Don Heckman wrote in the New York Times that "Her [Labelle] effectiveness traces to a masterful command of blues technique, good material, two fine back-up singers, and an ability to reach past the parochial limits of black blues into the kind of wide-ranging expression that touches audiences of all colors." This winning combination brought the group success.

With each performance, the American public became more and more impressed. At one performance at the "Soul Festival," a young man was so moved by their performance that he literally jumped on the stage and began singing and dancing with Patti Labelle. Instead of having the crazed fan removed, Labelle and the group incorporated him into their next number, and a backstage worker commented, "I've never seen audiences like these, not here." In 1972, the group released an eclectic album titled Moon Shadow, which featured songs from Nona Hendryx and a gospel-tinged song by Sarah Dash. The album was comprised of many rhythms that captured the public's attention. Their fan base was expanding, and in October 1974, they became the first African-American contemporary act to perform at the Metropolitan Opera House. In December, they released the record Nightbirds, which contained the number one hit on the Hot 100 in 1975, "Lady Marmalade." This was the highest point of fame that Patti and the Bluebelles reached, and in 1976, the group decided to go its separate ways.

Embarking on a solo-career, Patti Labelle was now able to show the world her talent. SHe released a self-titled album in 1977, the same year she lost her first sister. This album introduced Labelle in a new light, and it showed an R&B side to her work. In 1982, she coped with the loss of her second sister, but was still able to release her album. In 1983, Labelle reached notable success with her album I'm In Love Again. The song "If Only You Knew" reached number one on the R&B charts. In 1985, she conquered the pop realm as well with her song "New Attitude." In 1986, she released her best-selling album The Winner In You. "On My Own" became her first solo number one, and "Oh People" was also a top 20 hit.

Labelle was on top of the world and entered the 1990s as an R&B sensation. She soon lost her third sister to cancer. She was now the mother to six children, one her own, three from one of her sisters, and two adopted from her husband Armstead Edwards. In 1991, she released Burnin,' and she won her first Grammy Award for Best R&B Female Vocal Performance. Labelle then had many successful albums including, 1994's Gems, 1997's Flame, and 1998's Live One Night Only. Labelle won her second Grammy Award for Live One Night Only, and due to a petition from her large fan base, she was accorded a star on the Hollywood Walk of Fame, located on 7000 Hollywood Blvd. In 2000, she divorced her husband and released her next album, When A Women Loves, which was comprised of songs about heartbreak.

Labelle is an inspiration to the music industry, and many of her songs have been redone by new artists. Her legendary hit "Lady Marmalade" was redone by Christina Aguilera, Lil' Kim, Pink, and Mya, which was quite a success. Some of her other songs were also remade, such as "Love, Need & Want You" and "If Only You Knew." In 2004, Timeless Journey was released, and it went gold. In 2005, she had a hit with The Isley Brothers with the song "Gotta Go Solo."

Patti Labelle is not only gifted in the music arena, but is also talented as an author. She has written best selling books from autobiographies to cookbooks, including Don't Block the Blessings: Revelations of a Lifetime, Patti Labelle's Lite Cuisine, Labelle Cuisine, and Patti's Pearls. She is also an actress, and starred in "Out All Night" (her own sitcom-series). She is also a producer, having created the show Living It Up With Patti Labelle, which was broadcast on the TV One Network. She also branched into the fashion industry with Patti Labelle Clothing.

Labelle is also an activist. Patti Labelle is a diabetic and also lost her mother to the disease. She served as a spokeswoman for the National Medical Association, which gives out a scholarship in her name. She was also a spokeswoman for the National Minority AIDS Council's "Live Long, Sugar" campaign and the American Diabetes Association. Labelle also served on the Boards of the National Alzheimer Association and the National Cancer Institute and the University of Miami's prestigious Sylvestri Comprehensive Care Center. She is an extremely gifted and driven woman, earning three Honorary Doctorate Degrees from Cambridge University, Drexel University, and the Berklee School of Music.

Today, Labelle is still touring as an artist and living a very active life. In 2008, Labelle authored one of her more recent cookbooks, Recipes for the Good Life. In 2010, Labelle returned to the Broadway stage after a twenty year hiatus, performing in the musical Fela! In 2011, she starred alongside singer Ciara in the movie Mama, I Want to Sing! Labelle won the BET Lifetime Achievement Award in 2011. Her website includes information about her products, including seasonings, cookbooks, music, and more, as well as information about her upcoming tours and recent awards.

Labelle has proven over and over again her credibility as a music sensation. She says in her own words, "If you're feeling what you're doing, if you have that soul, spirit and motivation you can do anything. As for me, I'm ready for greatness. I am ready for the world."

Patti Labelle and the Bluebelles