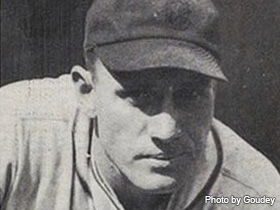 Chuck Klein was a baseball player born in Indianapolis, Indiana, in 1904. As a child he worked in a steel mill with his father, but he eventually joined the minor league baseball club in Evansville in 1923. After only a year he signed with the Philadelphia Phillies, which is where he would become a star. Klein broke many records, such as scoring 158 runs in a season and hitting 107 extra base hits in a season. In 1933, Klein won the Triple Crown batting title. When the Phillies struggled financially, Klein was traded to the Cubs. Three years later he went back to the Phillies where he would end his career after the war in 1944.

Chuck Klein was a hard working young man who would become one of the best baseball players of his time. Charles Herbert Klein was born near Southport, Indiana, as the son of farmers Frank Klein and Margaret Vacker. Klein was the star athlete of his Southport High School, which is where he graduated in 1923. After high school, Klein worked briefly on a construction road gang and in a steel mill. By doing this, he developed the 6'0", 185 pound frame that carried him through his great career.

Klein left the steel mill and tore up the world of semiprofessional baseball. He signed a minor league contract with Evansville of the Three I League in 1927. The next year, while he was hitting .331 at Fort Wayne of the Central League, his contract was purchased for $7,500 by the Philadelphia Phillies who outbid the New York Yankees. In 1928, in his first 64 games with the Phillies, Klein showed signs of greatness by hitting .360. From here, his career skyrocketed into a Hall of Fame career, and he became one of the best Philadelphia Phillies players of all time.

During the next five years, wearing the number one on his jersey, Klein's statistics ranked among the most outstanding in history, leading the National League in 18 offensive categories. During this time period he carried a 359 batting average, averaged 36 homeruns per year, 139 runs batted in, 224 hits, 132 runs scored, and a slugging percentage of .636. Also, during these years, he set two National League records; one was scoring 158 runs in a single season and the second was hitting 107 extra base hits also in a single season. In 1933, he captured his first batting title, hitting .368 and also winning his first Triple Crown award (first in batting average, runs batted in, and homeruns). At the same time he captured four homerun titles (1929, 1931-33), and he was twice named the National League's Most Valuable Player in 1931 and 1932.

Klein was also superb in the outfield. The home field of the Phillies, Baker Bowl, had tricky dimensions. The fence in right field was only 280 feet from home plate. Klein became an adept outfielder, mastering caroms off the high wall. Learning to play the fence for rebounds was crucial, and in 1930 he had 44 assists, which was a single season record, and to this day, it has not been challenged.

In November 1933, the Phillies, who were struggling financially, traded Klein to the Chicago Cubs for three young prospects and $65,000. Klein's career was not the same in Chicago. His production for his team declined, and he was plagued with injuries, although he did still manage to maintain a batting average of .301. With the Cubs, he made it to the World Series in 1935, but they lost in six games. After the year of the World Series, Klein's injuries and drinking problems affected his performance greatly. Because of this, he left the Cubs and went back to the Phillies in 1936. In Philadelphia, he experienced what would be his last strong season as a professional baseball player, scoring his last of six 100 run seasons. In 1939, he was sent to the Pittsburgh Pirates for one season.

In 1940, Klein returned to the Philadelphia Phillies. This is where he finished his career, retiring from the team in 1944 after the wartime season.

Klein completed a very successful 17 year major league career with some of the most impressive statistics of all time. Following his years playing baseball Klein ran a small bar in the middle-class neighborhood of Kensington just outside of Philadelphia. He continued his heavy drinking, which eventually jeopardized his health. Klein began to suffer, and he was left semi-invalid from a disease of the central nervous system. He moved back to his birth place in 1947, living with close relatives until he died of a cerebral hemorrhage on March 28, 1958.

Klein led a successful career in the major leagues, but was plagued by alcoholism, which led to his death. Klein was honored in 1980 with his election to baseball's Hall of Fame in Cooperstown, New York.