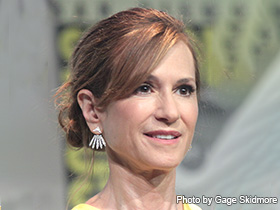 Born in March 1958, Holly Hunter was raised in Conyers, Georgia. She graduated from Carnegie Mellon University in 1980 and moved to Los Angeles to pursue her love of acting. In 1993, Hunter shined in The Piano as a mute pianist during the 19th century, earning her an Oscar for best actress. Extremely versatile, Hunter also starred in Emmy Award-winning television series, such as Roe vs. Wade and an HBO special featuring a Texas mom obsessed with cheerleading. Now a four-time Oscar nominee and a mother to twins, Hunter continues to act in a variety of films.

Born the youngest of seven children on March 20, 1958, in Conyers, Georgia, Holly Hunter grew up on a quaint 250 acre farm. Her parents, Charles Edwin and Opal Marguerite Hunter, always encouraged her love of acting from Hunter's first performance in fifth grade as Helen Keller, to her most recent accomplishments. Wishing to pursue a career in film, Hunter left home to study drama at Carnegie Mellon University in 1976. Upon graduation in 1980, she moved to New York City, where she met playwright Beth Henley in a stalled elevator. Henley would play a major role in Hunter's career. While living in New York for two years, Hunter acted in a few mediocre films such as The Burning, her first movie appearance. Continuing her pursuit of a career in film, Hunter moved to Los Angeles in 1982. However, she did not land her first starring role until 1987, as Edwina McDonnough in Raising Arizona. Written by two of her roommates, brothers Ethan and Joel Coen, the brothers "...created a fantastic and hilarious world that's close to the one we live in, but with the brightness turned way, way, up," according to the Apollo Guide. The same year she also starred in James L. Brooks' Broadcast News. Hunter was nominated for numerous awards for her role as Jane Craig, a news producer, including best actress from the Academy Awards. She also won best actress awards from the New York Film Critics Circle, National Board of Review, L.A. Critics Film Association, and the Berlin International Film Festival.

Her next big success was in 1989 for her role as Ellen Russell in NBC's made for TV movie, Roe vs. Wade. Based on the true events leading up to the famous United States Supreme Court case, Roe vs. Wade, that allowed women to obtain abortions legally, Hunter's performance was nothing less than stellar. The movie retells the story of Ellen Russell, a destitute pregnant woman in 1970, who hires an attorney in Texas to fight the district attorney of Dallas to legalize abortion. Her performance earned her an Emmy for Outstanding Actress in a Miniseries or Special. However, this was not to be her last success.

In 1993, Holly Hunter starred as a mute pianist in The Piano. A mute woman in her thirties is sent to New Zealand during the 19th century for an arranged marriage with her daughter. A beautiful tale, inspired by a true story, Holly Hunter is best known for her performance in The Piano. Amazingly, she played all the piano pieces on her own, as she had begun playing at age nine. According to a review by Owen Gleiberman for Entertainment Weekly, The Piano's musical pieces, composed by Michael Nyman, are "intensely beautiful," and become a metaphor for the condition of women in society. Nyman believes her inability to speak is a virtue. Instead, Hunter's character uses music, to reveal "...not just what she feels but who she is." Her stellar performance earned her an Academy Award for best actress among many other awards and nominations.

The same year Hunter also played Tammy Hemphill in The Firm. Based on a novel by John Grisham and starring Tom Cruise as Mitch McDeere, a struggling new lawyer in an unethical company; this thriller opened to an enthusiastic audience. For her performance as Tammy Hemphill, Hunter was nominated for Best Actress in a Supporting Role at the Academy Awards. Although she did not win for this performance, her role as Wanda Holloway in HBO's The Positively True Adventures of the Alleged Texas Cheerleader-Murdering Mom was rewarded. Desperately wishing for her daughter to make the varsity cheerleading team, Wanda Holloway enrolled her in dance and gymnastic classes when she was young. Likewise, her neighbor and best friend, Vana Heath, wanted her daughter to pursue cheerleading as well. However, Vana's daughter made the team and Wanda's did not. Angry, Wanda attempts to murder her ex-friend's daughter. However, was unsuccessful and sent to jail. Hunter's performance as mentally unstable, Wanda Holloway, earned her another Emmy for outstanding lead actress in a miniseries or special.

In 1995, a couple years after the successes of The Piano and The Firm, Holly Hunter married Janusz Kaminski, a two time Oscar winning cinematographer. However, they later divorced in December of 2001. According to People Magazine, Hunter is currently dating Gordon Macdonald (from The Thin Red Line) with whom she had twins in January 2006.

Hunter starred in ABC television miniseries When Billy Beat Bobby in 2001. Often referred to as "The Battle of the Sexes," the series was based on the 1973 tennis match (and what occurred prior) between Billie Jean King and Bobby Riggs. Her acting earned Hunter another nomination from the Academy of Television Arts and Sciences for her role as Billie Jean King. The show was also nominated for outstanding casting for a miniseries, movie or a special award.

Since her achievement as Ada in The Piano, Hunter has gone on to perform in many other films such as O Brother, Where Art Thou? (2000), Moonlight Mile (2002), and the controversial film, Thirteen (2003) in which she plays Melanie, a caring mother to a young 13-year-old daughter who's drug use spirals out of control. According to Entertainment Weekly, Hunter's decision to play a supporting role to two teenage girls was a gutsy choice. In an interview with Jessica Mehalic from Cosmopolitan, Hunter reveals her motives for motive to act in Thirteen:

What really compelled me to do Thirteen is how it shows the strangeness that we all ultimately feel toward one another. No matter how many years you have lived under the same roof with someone else, you probably don't really know them completely.

A believable performance, according the Northwest Herald, Thirteen relates a story of unparalleled accuracy in the lives of troubled teenagers. Her role as Melanie earned her another Oscar nomination as Best Actress in a Supporting Role.

Her most recent works include a role in Little Black Book (2004) with Brittany Murphy, and the voice of Helen Parr (Elastigirl) in the family action movie The Incredibles (2004), which was the 2005 Oscar winner for Best Animated Feature. She is currently in the process of filming Downloading Nancy (2007), and is projected to play Philomena Lynott in My Boy (2007). Holly Hunter has since moved back to New York and continues to act.