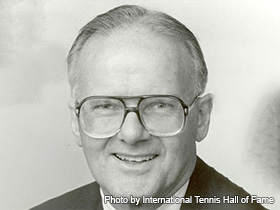 Lamar Hunt was born on August 2, 1932, in El Dorado, Arkansas. His father, H.L. Hunt, was ranked as one of the eight richest Americans in 1957 by Fortune Magazine from his Texas oil fortunes, which gave Lamar excellent educational opportunities. In 1950, he graduated from the Hill School, a boarding school for 9-12 graders in Pottstown, Pennsylvania. The next six years of his life were spent at Southern Methodist University in Dallas, Texas, where he was a three year reserve end on the football team. Hunt graduated with a BS in geology in 1956. In 1959, Hunt proposed his plan to the National Football League (NFL) to add another franchise to their league in Dallas. However, the NFL rejected his proposal, so he decided to form a rival league, which he called the American Football League (AFL).

In 1960, Hunt and seven other owners, who were called the "Foolish Club" by their skepticL s, started the AFL. During its early years, the AFL was the subject of many jokes, and most expected it to fail. However, Hunt remained confident his league would succeed. As the late William Sullivan, former owner of the New England Patriots, said, "Hunt was the cornerstone, the integrity of the league. Without him, there would have been no AFL." He chose Dallas as the location for his franchise, and named it the Texans. The NFL subsequently placed their own franchise in the same city, the Dallas Cowboys, to rival the Texans. Both franchises achieved equal popularity in Dallas, but Hunt decided to move the Texans to Kansas City in 1963, and re-named them the Chiefs. In 1966, he was a key figure for the AFL in the AFL-NFL Merger. During the merger, Hunt and Dallas Cowboys' owner Tex Schramm, former rivals, had leading roles representing their leagues. Hunt helped set up a championship game between the top AFL and NFL teams, the first of which took place in 1967 between his Kansas City Chiefs and the Green Bay Packers. This game, which was known as the "AFL-NFL World Championship Game" during its first two years in existence, was re-named the "Super Bowl" during its third by Hunt after he had seen his children playing with a toy called the "Super Ball." The Roman numerals that follow the Super Bowl title each year were also his idea, as he convinced then NFL Commissioner Pete Rozelle the numerals gave the game more dignity. In 1972, at age 39, he became the first AFL figure to be inducted into the Pro Football Hall of Fame just 13 years after organizing the league.

Lamar Hunt's contributions to sports did not stop with the game of football. During the same year as the AFL-NFL Merger, 1966, he was one of the founding investors of the Chicago Bulls of the National Basketball Association. He was the founder of World Championship Tennis, a tennis promotion company, and helped form the North American Soccer League in 1968. He also owned the Dallas-Fort Worth Spurs, a minor league baseball team, from 1965-1971. "Hunt Sports Group," owned by his family, currently manages the Major League Soccer franchises F.C. Dallas and Columbus Crew and used to operate the Kansas City Wizards. In addition to his various sports contributions, Lamar Hunt had a profound impact on Kansas City real estate. He opened two popular theme parks in the city, named "Worlds of Fun" and "Oceans of Fun." Also, he was closely involved in the original development plans for the Chiefs' Arrowhead Stadium in the late 1960s.

Lamar Hunt was a sports icon who positively affected every league and franchise he became involved in. In addition to being enshrined into the Pro Football Hall of Fame, he was inducted into the U.S. Soccer Hall of Fame in 1982 and the International Tennis Hall of Fame in 1993. His greatest tribute is the Lamar Hunt Trophy, which is presented annually to the champion of the American Football Conference. Hunt was diagnosed with prostate cancer in 1998, which was the cause of his death on December 13, 2006.