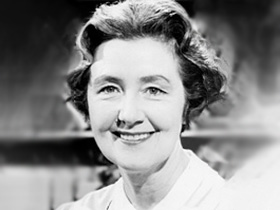 Long known as Pittsburgh's Story Lady—Margaret Hodges has written many excellent children's books, including the Caldecott award-winning Saint George and the Dragon (1984).

Pittsburgh's "Story Lady," Margaret Moore Hodges was born in Indianapolis in 1911. She later moved to Pittsburgh and became a fixture in public literary affairs, reading on the radio, and working in the Pittsburgh public schools. She has been prominently recognized for her children's books throughout her long life. Hodges passed away in 2005.

Sarah Margaret "Peggy" Moore Hodges was born in Indianapolis, Indiana, on July 26, 1911. She is the daughter of Arthur Carlisle Moore, a businessman, and Anna Marie Moore. On September 10, 1932, Hodges married Fletcher Hodges, Jr., a museum curator, with whom she had three children.

Hodges began her literary pursuits in Tudor Hall School for Girls and then later graduated with an AB from Vassar College. Throughout her high school and college years, Hodges wrote for and contributed to school magazines. Essentially, her career began when she had the opportunity to continue writing through the Junior League of Pittsburgh. She had a column in a monthly magazine and modified children's books for a Junior League radio program, The Children's Bookshelf. Later, Hodges became a radio storyteller for Let's Tell a Story, a program sponsored by Carnegie Library of Pittsburgh and the Pittsburgh Public Schools. She earned a master's degree in Library Science at Carnegie Library School, in 1958, where she worked as a children's librarian and storyteller. In that same year, Hodges's first book, One Little Drum (1958), was published. Then, in 1964, Hodges became a story specialist for the Head Start program of the Pittsburgh Public Schools; she continued this endeavor for four years. During this time, she began to teach a course in storytelling at the Library School, which is now the Graduate School of Library Information Sciences at the University of Pittsburgh.

Hodges had a celebrated career in children's literature for nearly half a century. Her oeuvre includes children's fiction and nonfiction, as well as mythology, or folklore. She wrote largely of real-life stories based on the escapades of her three sons and used a picture book format to retell folktales and myths. She also wrote biographies on individuals she felt had profound significance within world history, but who often go unrecognized, or unappreciated by society. Her most prized books included Saint George and the Dragon: A Golden Legend (1984), The Arrow and the Lamp: The Story of Psyche (1989), Saint Jerome and the Lion (1991), and The Hero of Bremen (1993).

Hodges's literary works and influential efforts to expand the availability, appeal, and variety of children's literature garnered numerous awards throughout the years. She received the Carnegie Library staff scholarship in 1956. In 1964, The Wave (1964) received the Caldecott Award nomination and the New York Times Ten Best Picture Books of the Year award. Selected as the best book for young adults by an Indiana author in 1970 was Lady Queen Anne: A Biography of Queen Anne of England (1968). The following year, The Making of Joshua Cobb(1971) was selected as a New York Times outstanding juvenile book. In addition, Hodges was recognized as a Distinguished Alumna for the Carnegie Library School and Graduate School of Library and Information Science in 1976. She was granted the Outstanding Pennsylvania Children's Author award a year later. In 1984, Saint George and the Dragon: A Golden Legend received the Caldecott award, the Carolyn W. Field Award for best children's book by a Pennsylvania author, and the New York Times Best Illustrated Children's Book Award. During 1985, she was given the Keystone State Reading Award. In recognition of her literary achievements, the Margaret Hodges Scholarship was established in 1989.

Margaret Moore Hodges died in Verona, Pennsylvania, on December 13, 2005. One of her final books, a tale of Moses, was scheduled for January 2006 publication.