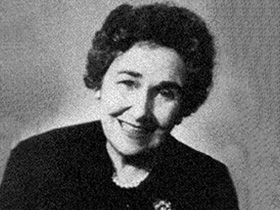 Carolyn Haywood was born in Philadelphia in 1898 and was a lifelong resident of that city. After graduating from the Philadelphia High School for Girls and the Philadelphia Normal School in 1922, she spent a year teaching at the Friends Central School in Wynnewood before enrolling in the Pennsylvania Academy of Fine Arts. Her first children's book, "B" is for Betsy, was published in 1939. Haywood published over 40 titles translated into more than five languages in addition to her accomplishments as a children's portrait painter and mural artist. Haywood died in her Philadelphia home in 1990.

Carolyn Haywood, the beloved children's book author, was a life-long Pennsylvanian and Philadelphian. Born on January 3, 1898, to parents of modest, middle-class means, Charles and Mary Emma (Cook) Haywood, Carolyn had one sibling, a younger brother who later became a silversmith, who passed away in 1958. Haywood's parents encouraged her prevalent artistic talents from a young age as their daughter spent most of her free time drawing and painting.

After attending the Philadelphia High School for Girls, Haywood matriculated at the Philadelphia Normal School in 1922 with a background in teaching. Haywood's talents immediately gained her employment at the Friends Central School in Wynnewood, a western suburb of Philadelphia. It was while teaching at Friends Central that her true passion for children's literature emerged, initially because there were no identifiable books for the upper primary grades, especially the third grade students she daily taught. She enrolled in the Pennsylvania Academy of Fine Arts in 1923, after only teaching for one year, and received a substantial scholarship enabling her to devote herself solely to study. Haywood's initial desire to study illustration was sidetracked at first by an early teacher, Henry McCarter, whose deeper interests in portrait painting rubbed off on Carolyn.

In 1925, Haywood won yet another scholarship, this time a Cresson traveling scholarship, and set forth for Europe spending a year traveling the continent. Upon Haywood's return to Philadelphia, Violet Oakley, a premiere local artist, hired her as a studio assistant while completing her study at the Pennsylvania Academy of Fine Arts. Oakley, a student of the prominent children's book author Howard Pyle, influenced Haywood to try mural painting while Oakley completed work on the famous murals at the Pennsylvania State Capitol in Harrisburg. Even today a number of Haywood's murals dot various banks and schools around the Philadelphia area and southeastern Pennsylvania. Elizabeth Shippen Green Elliot and Jessie Wilcox Smith, both students of Pyle like Oakley, also tutored Haywood early in her career. Elliott's illustrations appearing in Harper's and Scribner's magazines were the most influential on the young Haywood, and she began to develop her interest in children's literature with new zeal.

Harcourt Brace's juvenile department editor, Elizabeth Hamilton, met the young Haywood and gave her the direction of her literary career: "Write something about little American children doing the things that little American children like to do." At that period of time the majority of children's literature was still concerned with foreign children, of the kind now studied in foreign language classes such as Emil und die Detektiv and Le Petit Prince. Haywood found her niche with "B" is for Betsy, published in 1939, and the success spawned eight additional Betsy books in the same series.

The next character to pop from the streets of the Chestnut Hill neighborhood Haywood called home was six-year-old Penny, a child whose real name was William and gained the nickname when he was adopted as a baby thanks to his resemblance to the coin. Here's A Penny appeared in 1944, and two more Penny books rounded out the decade. Betsy and Penny were not based on real characters on the streets of Chestnut Hill, but were modeled after local children just as other characters throughout Haywood's books and later portraits.

Little Eddie entered Haywood's cast of characters in 1947. Eddie and Betsy became the two most popular characters, and their books gave Haywood work for over 50 years. Haywood stopped illustrating her own stories in the 1970s, but local illustrator friends drew in her stead. It was during that decade that Haywood began work on holiday stories that were later published in both Jack and Jill and in the Philadelphia Inquirer Magazine. A number of adult books were also completed during this time, with a few illustrations by Haywood of course, including her biography of famous Pennsylvania women, Book of Honor.

Throughout her literary career Haywood always maintained time for her painting, in addition to traveling. Her books were translated into many languages including French, Japanese, German, Norwegian, and Swedish. A translation of her book Away Went the Balloons(1973) was a nominee for Children's Book of the Year in Germany. In 1969 Haywood received the distinction of a Distinguished Daughter of Pennsylvania and in 1970 she received the Pennsylvania Librarians Outstanding Pennsylvania Author Award.

After a prolific writing career, with illustrations, portraits, and murals to boot, Haywood's stamp is all over Philadelphia and southeastern Pennsylvania. The Blue Bell School, a private school in Whitpain Township, even has a "Carolyn Haywood Corner" in its lower school library full of Betsy, Eddie, and Penny books.

Haywood's colorful life came to a peaceful end on January 11, 1990, when she quietly passed away in her home in the Chestnut Hill section of Philadelphia.