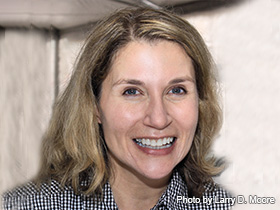 Author of Mrs. Kimble (2003), Baker Towers (2005), and other works of fiction,Jennifer Haigh was born in Barnesboro.

Born in Barnesboro, Pennsylvania, Jennifer Haigh is a novelist who graduated from Dickinson College in 1990. After publishing several short stories in magazines, she retired from work as an editor to write full-time.

Jennifer Haigh was born in Barnesboro, Pennsylvania, in 1968. Her parents are Jay and Elizabeth Wasilko. Haigh graduated from Dickinson College in 1990 with a BAin French. Later she went on to earn her MFA. from the Iowa Writers Workshop. During the gap between her degrees, Haigh spent her time working as a senior editor for SELF magazine, as well as a yoga instructor. She began writing short stories while still working as an editor, and then quit her job to work full-time writing novels.

Her first novel,Mrs. Kimble (2003)is told from the point of view of the three different women who go by that name. Birdie, Ken Kimble's first wife, was 18 when they were married, still a child when she started having his children. His second wife Joan, a wealthy heiress whose life has been forever changed by a tragic illness, is trying to find happiness before she dies. Dinah makes a perfect target for Kimble's third marriage as he preys upon her vulnerability due to a large birthmark on her face. Kimble represents to all these women an opportunity for happiness, and an escape from the life they have been living. Unfortunately the charm that Kimble uses to attract each of them quickly fades, and reality sets in as each marriage comes to an end.

Baker Towersis set in the small town of Bakerton, Pennsylvania. It is a coal-mining community divided into neighborhoods according to ancestry—Little Italy, Polish Hill, and Swedetown. The book tells the story of the Novak family, torn apart by war, death, and an intense desire by all the children to escape the fate of Bakerton. The five children are being raised by a single Italian mother on Polish Hill, each child desperate not to get trapped in Bakerton by the coal mines, the dress factory, or teenage pregnancy. Each of the Novak children attempts to escape Bakerton, but one by one they return to a town and family that are slowly collapsing over time.

In both of Haigh's early novels, she creates rich character sketches, drawing the reader into the lives of fictional people, making the books difficult to put down. Both novels received very strong praise from critics. The New York Times refers to Haigh's writing in Baker Towers: "[Haigh] beyond being an expert natural storyteller with an acute sense of her characters' humanity, sustains a clear sense of Bakerton's vitality or lack thereof." The Boston Globe called Mrs. Kimble "an affecting tale of the power of a charismatic predator and the acquiescence of his victim...sharply observed."

Haigh has received several awards including the Fulbright teaching fellowship, the James A Michener fellowship in 2002, and the Hemingway Foundation/PEN Award, distinguished first book of fiction, in 2004 for Mrs. Kimble. Her short story collection,News From Heaven (2014) won the Massachusetts Boow Award and the PEN New England Award.Heat and Light (2016) won a Literature Award from the American Academy of Arts and Letters and was also named Best Book of 2016 by a number of journals. She was a Guggenheim Fellow in 2018.

At the time of this writing, she lives and teaches near Boston.