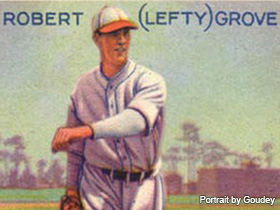 One of the best left-handed pitchers ever, Lefty Grove played with the Athletics from 1925 to 1933.

Lefty Grove was born in Lonaconing, Maryland, in 1900. He was a baseball pitcher who played in the minor leagues for over 4 years. He played for the Martinsburg, West Virginia team and the Baltimore Orioles as a left handed pitcher before he was traded to the Boston Red Sox. Grove played for the Philadelphia Athletics where he gained fame and exposure. There he earned over three straight pennants and two World Series titles. He died in 1975.

Robert Moses Grove was born March 6, 1900, into a household with eight children in Lonaconing, Maryland. His parents were John Grove who was a coal miner and his mother Emma Beeman. Robert Grove grew up going to public school, but left school in eighth grade to help support his large family. He started working in a silk mill for 50 cents a day. Around 1916, he began loading coal for a few weeks, filling in for his brother who was injured. He did not like it and did not want to return to work after his brother recovered. After the coal mill he worked in a glass factory. Then for two years in 1918, Grove worked as a railroad hand working on steam locomotives in Cumberland, Maryland.

At age 17, Grove joined an amateur club team in Midland, Maryland where he played first base. After watching him play, his manager moved him to pitcher since he could throw harder than any other person on the team. Grove’s left-handed pitching grabbed the attention of Bill Lowden, manager of the Martinsburg, West Virginia team who signed Grove for $125 a month. As word spread about Grove’s fastball, he was scouted by Jack Dunn, the owner and manager of the Baltimore Orioles of the International League. Dunn purchased his contract for $3,000 and Grove started playing for them in June. He later said that Martinsburg only sold him because they needed money to expand the small grandstand and to build a fence around their ballpark. Grove was quoted saying “I was the only player ever traded for a fence.” The Baltimore Orioles were ranked among the strongest minor league clubs. During his time with the Orioles, Grove helped them win five consecutive International League pennants from 1920-1924.

In 1921, during his first season with the Baltimore Orioles, Grove married his hometown sweetheart, Ethel Gardner, with whom he had two children. In 1924, Dunn sold Grove to Connie Mack’s Philadelphia Athletics for an unheard of amount of money, $100,600, $600 more than what the Yankees paid for Babe Ruth a couple of years earlier. With the Philadelphia Athletics, Grove reached his highest level of accomplishment, leading the American League in seven consecutive seasons in strikeouts, five times in earned-run average, and four times each in wins and winning percentage. He also had seven seasons where he won 20 games or more with a career high in 1931 with 31 victories. Grove helped lead the A’s to three straight pennant wins from 1929-1931 and two World Series titles. He won 300 games in his career and only lost 141. In 1931, Grove received the Baseball Writer’s Association’s first American League Most Valuable Player Award. Grove did achieve all this without being a fierce competitor. After a loss, Grove was known to tear his clothes and smash in lockers. One sportswriter said he was so fast he could “throw a lamb chop past a wolf.”

In 1934, Connie Mack was losing money and, desperate to cut his payroll, sold Grove to the Boston Red Sox for $125,000. With the Red Sox, Grove still won over 100 games in eight seasons. He retired from baseball in 1941 and moved back to Lonaconing, Maryland.

He had invested his money wisely and did not incur losses during the stock market crash. Grove had built houses in Lonaconing for him and his family and began helping his brother run bowling alleys. He was offered coaching positions, but refused. He would rather spend his time fishing. In 1947, Grove was elected to the Hall of Fame with 300 wins. He received 76.4% of the ballot that was cast.

His wife, Ethel, died in 1959, following his loss he moved in with his son and daughter-in-law in Norwalk, Ohio. Grove played a large role in the community after his retirement and enjoyed his time at home with his family. Grove would die of a heart attack in 1975. To this day, Lefty Grove is still recognized as one of the greatest pitchers ever in baseball history.