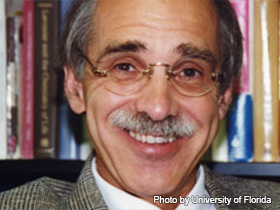 Combining his training in history and the sciences, Gregory became a professor of the History of Science at the University of Florida.

Historian Frederick Gregory was born in 1942 in Honesdale. After training in mathematics and religion, he became a scholar of the history of science at the University of Florida. He has written two books and numerous scholarly articles in his field. He currently lives in Gainesville.

Frederick Gregory was born on December 3, 1942, in Honesdale, Pennsylvania. He was the son of Richard and Eleanor Gregory. Following his secondary education, Gregory matriculated at Wheaton College (Illinois), earning his B.S. in Mathematics there in 1964. He then attended the Gordon-Conwell Theological Seminary, earning his Bachelor of Divinity there in 1968. He told an interviewer with Contemporary Authors Online that this somewhat unusual combination of training made it "natural that [he] would direct [his] research as a historian to the intersection of those disciplines." Gregory married Patricia Kowalski in 1967; the couple has two children.

Gregory continued his education, earning an M.A. from the University of Wisconsin at Madison in 1970. He began his doctoral studies that same year at Harvard University. While there, Gregory became interested in the History of Science as a discipline and became a member of its Newsletter Advisory Committee. In 1973, he completed his work on his dissertation: "Scientific Materialism in Nineteenth-Century Germany." Dr. Gregory began his teaching career following his graduation, accepting a position at the now-defunct Eisenhower College in New York State. He accepted an appointment at the University of Florida in 1978 and has remained there since.

During his work at the University of Florida, he has published two book-length studies related to German history: Scientific Materialism in Nineteenth-Century Germany and Nature Lost? Natural Science and the German Theological Traditions of the Nineteenth Century. He also served as editor of The Eighteenth Century: A Current Bibliography from 1977 to 1990 (with co-editor Robert Hatch during the last eight years of that period) as well as contributing editor to Science and Culture in the Western Tradition and Geschichte der Wissenschaftsphilosophie [History of the Philosophy of Knowledge]. His work has earned him two American Philosophical Society grants, one from the Alexander von Humboldt Stiftung and another from the National Science Foundation. Administratively, Gregory served as chairman of the History Department at the University of Florida from 1991 to 1995 and as President of the History of Science Society from 1996 to 1997.

He currently teaches in the History of Science program at the University of Florida. Gregory told Contemporary Authors Online of his goals for research:

My own belief is that the lesson to be learned from all of this is tolerance. In some cases, there is no common ground on which a dialogue can be conducted. Historically we have not handled that situation very well. Invariably this is the point when differences are resolved by force. Perhaps one lesson from history is that, while understanding may not always be possible, we must learn to agree that we have permanent differences which cannot be overcome. If so, then a refusal to accept these differences (most likely because of insecurities about our own views) more or less guarantees both attacks on those who disagree with us and proselytizing campaigns on behalf of ourselves. I continue to search history for clues about the best options we have before us.

He recently completed a 36 lecture set of audio and video material on the history of science from 1700 to 1900 for the Washington-based Teaching Corporation. The Volkswagen Foundation has funded his current work (with three other professors) on the subject of "Mysticism and Modernity."