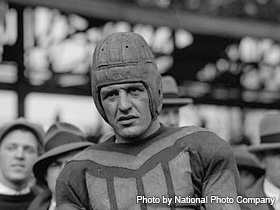 Forksville native Red Grange, a.k.a. "The Galloping Ghost," was voted the number-one college football player of all time.

Harold "Red" Grange was born the year of 1903 in Forksville, Pennsylvania. His mother died when he was five. His father moved the family to Wheaton, Illinois. Grange was always very athletic and this came into the eye of the public when he was in high school. He continued with football until 1935. After he retired, he went on to marry Margaret in 1941. He had many jobs during his retirement and was successful in all of them. He died at the age of 87 in Lake Wales, Florida.

On June 13, 1903, Mr. and Mrs. Lyle Grange had their third child, Harold Edward Grange. He was born in Forksville, in Sullivan County, along with his two siblings Sadie and Lyle. His father was a foreman of three local lumber camps owned by Charles W. Sones. At the age of five, Grange's mother passed away, after which his father packed up the family and moved to Wheaton, Illinois. Here they moved around between different relatives' homes until the family had enough money to survive on its own.

Growing up in Wheaton, Grange received the nickname "Red" because of his flaming red head of hair. He grew up playing sports with his friends, despite doctors warning him about his heart murmur. In Wheaton, there were no such programs as the YMCA; this forced his friends and himself to play football in local vacant lots and basketball in converted barn lofts. Eventually, the Boy Scouts formed a league where the children were able to play their sports in the Wheaton College Gymnasium.

Red and his family had a rough time with money and this forced his father to move around from different jobs to try to support the household. With this trouble in the family, the children had to take on the responsibility of getting jobs. Red took on the job of delivering ice during the summer. This not only helped pay the bills but also helped build his muscles. This earned him the nickname "The Wheaton Iceman."

When it was time for Red to go onto high school, he attended Wheaton High. Around this time, his father became a local policeman and started working his way to the top of the system. Red was still short on money, so during summers he would work as the ice man and during the school year he would attend class. Living in this situation, he primarily focused on going to class, studying, and participating in sports. He also did not date because of being low on money and not owning suitable clothing. Even though it was a rough patch in Grange's life, high school is where his sports career entered the spotlight.

Grange was always athletic and proved his ability in high school, when he earned sixteen letters in four sports consisting of football, baseball, basketball, and track. He was a four-time sprint champion and scored 75 touchdowns during his four years playing high school football. After graduating in 1922, Red attended the University of Illinois. Here he joined the fraternity Zeta Psi. While in college, he intended to put his athleticism towards running and basketball. His fraternity brothers encouraged him to join the football team. Only standing about 5-foot-11 and 175 pounds, Grange was taken aback by the number of people at tryouts and their size.

Not only did Grange make the team, but he was moved to first string. In his first scrimmage as a varsity player, he scored two touchdowns, one of which was a punt-return. During his first game during his sophomore year, he wore the number 77 and scored three touchdowns against Nebraska. The rest of this year he scored 12 touchdowns and led the unbeaten Illinois team to the national championship. He was leading scorer in the Western Conference (now the Big Ten) and was named an All-American halfback.

On October 18, 1924, Grange reached legendary status against the University of Michigan, which had not been beaten in 20 straight games. Within 12 minutes, he scored four touchdowns. Later in the game, he scored his fifth touchdown and threw a 23-yard touchdown pass. Illinois won this game 39-14. Even though Red ended his season injured, he was again selected as an All-American.

Senior year was Grange's big year, considering its rocky start. He was moved to quarterback for the final games of the season. On October 5, 1925, he was on the cover of Time Magazine, putting him even more into the eye of the public. Grange's greatest performance was played against the University of Pennsylvania in Philadelphia on a muddy field. He scored three touchdowns and gained 363 yards on 36 carries, ending in a victory 24-2. This landed him an article in the New York World. Going into his final game, with many rumors of Grange turning pro, he ended his collegiate career with a victory over Ohio State. He ended his final year again as an All-American. Red played in 20 games as a college football player, running 388 times for 2071 yards, catching 14 passes for 253 yards, completing 40 of 82 passes for 575 yards, and scoring 31 touchdowns. During his college years, he earned the nicknames "the Galloping Ghost," (coined by Warren Brown), and the "Illinois Flash."

From his last game, Red left college immediately and went professional, touring with the Chicago Bears. That year, his number 77 was retired and remained retired; his is one of three numbers so honored. He was given a contract of $100,000 by promoter Charles C. "Cash and Carry" Pyle, a Champion theater owner and promoter. He was the one who helped Red get the salary he earned. At this point in time, college football was much more popular than professional football. Grange received the most credit for changing the perspective of the fans from college to professional football. It is said that Grange brought respectability and popularity to the sport.

Touring with the Chicago Bears did not turn out completely successfully. Grange missed several games due to injury and for the rest of the season only played a minimal amount of time. After this year, Grange left and formed his own league known as the AFL, the American Football League. Grange played through the 1926 season for the New York Yankees and suffered a horrible knee injury, ironically against his old team the Bears. The New York Yankees made it into the NFL, but this was Grange's first and last year playing for the team. The injury forced him to sit out the 1928 season.

From 1929 to 1934, Grange went back to the Chicago Bears and finished his career there. Though he lost some speed and cutting ability due to his injuries, he was still a good player and amazing defender. In the 1932 and 1933 seasons, Grange contributed to two Championship wins in the NFL. In 1932, he scored the only touchdown on a pass from Bronko Nagurski against the Portsmouth Spartans (now the Detroit Lions), and in 1933, he made a touchdown-saving tackle against the New York Giants. In 1934, Grange was injured for the championship game and had to sit out. The next post season he was knocked down by a hard hit and decided that was his time to retire.

Not only did Grange play football during these past years, but he also played a football role in the film One Minute to Play, and made a movie serial called The Galloping Ghost. Also during this time Grange had products named after him such as teddy bears, candy bars, and meatloaf. Grange stayed humble and kept on his path to achievements.

After retirement Grange moved onto other jobs and was successful in the insurance business, in real estate, as a motivational speaker, and as an announcer. He analyzed the Bears games for 14 years until 1963 and also covered college football games. In 1941, he did eventually marry his wife Margaret, whom he met on a plane while she was working as a flight attendant. They did not have any children.

During Grange's lifetime, he received many awards, starting off in college as a three time All-American halfback. Then in 1931 and 1932 he was named to an official All-Pro team. In 1963, he was inducted into the professional football Hall of Fame. He was also inducted into the college Hall of Fame. In 1969, college football's 100th anniversary, the Football Writers Association of American chose an all-time All-American team and Grange was the only choice that everyone agreed on. These awards and honors were all received before his death at the age of 87 from pneumonia on January 28, 1991, in Lake Wales, Florida.

In 1999, 65 years after his last game Grange was ranked number 80 on The Sporting News' list of the top 100 Greatest Football Players.