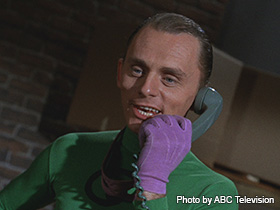 An accomplished actor trained at Carnegie Mellon, Frank Gorshin is best known for his role as "the Riddler" in the 1960s comedy series Batman,/em>.

Frank Gorshin was born in Pittsburgh, Pennsylvania, in 1933. He attended Carnegie-Mellon Tech School of Drama where he studied to eventually become an influential actor and comedian of the 20th century. Gorshin was most well known for his role in the 1960s television series, Batman, in which he played the Riddler. Gorshin has appeared in over 110 shows, both in television and film, has starred in Broadway shows, and was a talented impressionist. In 1960, he married Christina Randazzo and had a son, Mitchell. The two stayed married until his death in 2005.

Frank Gorshin was born on April 5, 1933, in Pittsburgh, Pennsylvania, to a railroad worker and seamstress. Growing up, Gorshin worked as an usher at the Sheridan Square Theatre where he began to do impressions of his screen idols, including Al Jolson, James Cagney, and Cary Grant. By age 17, Gorshin won a local talent contest and was given a week-long opportunity to perform at Jackie Heller's Carousel nightclub, where Alan King was then headlining. This was Gorshin's first paid job as an entertainer and the true starting point of his career.

After high school, Gorshin stayed in Pennsylvania and attended the Carnegie-Mellon Tech School of Drama. In addition to studying, Gorshin appeared in plays and performed in local nightclubs, furthering his talents.

In 1953, at the age of 19, Gorshin joined the United States Army, serving two years in the Special Services as an entertainer. It was during this time that Gorshin met Maurice Bergman, the person who would later introduce him to his first Hollywood agent.

In 1956, Gorshin finally landed a Hollywood role in The Proud and Profane, the first of many television performances. As he furthered his career, Gorshin lost out on a big role in 1958 to Don Rickles after suffering a concussion in a car crash. Oddly enough, the Los Angeles newspapers accidentally reported Gorshin as deceased, and he subsequently lost the role.

During the next phase of his career, Gorshin mainly took roles in B-movies such as Hot Rod Girl (1956), Drag Strip Girl (1957) and Invasion of the Saucer Men (1957). In 1956, Gorshin appeared on The Steve Allen Show and made a dozen appearances on Toast of the Town (a.k.a. the Ed Sullivan Show). It was not until 1960 that Gorshin landed his first role, an A-movie alongside Dean Martin and Judy Holliday titled Bells are Ringing. Gorshin's popularity continued to grow as he appeared in Hollywood nightclubs like the Purple Onion and opened for Bobby Darin at the Flamingo in Las Vegas. On April 8, 2007, Gorshin married Christina Randazzo with whom he had one son, Mitchell. The two remained married for the duration of Gorshin's life.

In 1966, Gorshin landed his most famous role as the Riddler in the television series Batman, a performance that earned him an Emmy nomination. Later on, Gorshin again played the Riddler in Batman the movie, which had been based on the original series. Gorshin's character quickly became a pop culture icon with his maniacal laugh and charisma. According to the Internet Movie Database, Gorshin's epic portrayal of the Riddler was what fueled writers to integrate the character as a recurring villain, something that was not originally in the plan. "I could feel the impact overnight," Gorshin commented in response to his role. After success with Batman, Gorshin received headliner status at MGM Grand Sahara and Aladdin Hotels in Las Vegas.

In 1969, Gorshin went on to receive another Emmy nomination for his performance as Commissioner Bele in an episode of Star Trek titled, "Let That Be Your Last Battlefield." Gorshin made his Broadway premiere in 1970 as the star of Jimmy, once again receiving great reviews. In addition to this work, Gorshin was part of a touring company and took roles in Promises, Promises, Peter Pan, Prisoner of Second Street, and Guys and Dolls.

Gorshin served as the Honorary Chairman, Entertainment Division for the American Heart Association in the 1980s. In the decades that followed, Gorshin took more television roles including The Phantom Eye in 1999 and The Black Scorpion in 2001.

The last of Gorshin's performances was on an episode of CSI, making a guest appearance during the fifth-season finale. On May 17, 2005, Gorshin passed away in Burbank, California, due to complications from lung cancer, emphysema, and pneumonia. He was buried at the family plot in Pittsburgh, Pennsylvania. Gorshin had appeared in over 70 movies and made over 40 television appearances, and his work was still aired after his death.