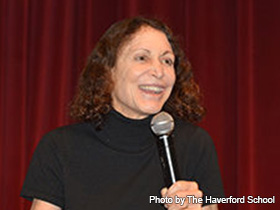 Artist Jane Golden was born March 12, 1953, in Margate, New Jersey. She attended Mason Gross School of the Arts at Rutgers, The State University of New Jersey and received her M.F.A. She moved to California to enroll at Stanford. Once she graduated from there she spent a brief amount of time teaching art to children in the Santa Monica area. Soon Golden co-founded the Los Angeles Public Art Foundation, but when diagnosed with lupus moved back to Philadelphia to be closer to her family. In Philadelphia, she started work for the Anti-Graffiti Network, now known as the Mural Arts Program. Golden has achieved prominence from her work in the community as director of this organization and still resides in Philadelphia.

Jane Golden is a painter from Margate, New Jersey, near Atlantic City. She was born to Gloria and Stanford Golden on March 12, 1953. Her parents owned "Gourmet Garage and China Outlet" stores in Somers Point and Marlton. She also has a brother named Jonathan. Most of Golden's childhood is very private but her life did not stay that way for long. She obtained her Masters in Fine Arts (MFA) from Mason Gross School of the Arts at Rutgers, The State University of New Jersey. She also attended Stanford University and in 1977 graduated from there with degrees in fine arts and political science. During this time she also attended University of Florence, Italy and Mount Holyoke College.

While in California from 1977-1979, she taught children art in the Santa Monica area, receiving a federal grant for this work. In 1979, she was an artist-in residence at the Brockman Gallery in Leimert Park. This was funded by a California Arts Council grant to conduct a mural program for the City of Los Angeles. She stayed until 1981 and during this time she painted one of her first major mural artworks, a 20ft. x 100ft. mural of the old pier, called "Ocean Pier"; it was named a historical landmark in 1984. Kathryn Levy Feldman quoted her as saying that mural painting is "addictive...when you paint a mural, you get continuous feedback from people on the street. Each time someone said, 'Thank you,' it made my day—and eventually changed my life." Indeed this did eventually change her life; in 1982, Golden co-founded the Los Angeles Public Art Foundation. Partly she did this because since she had taught kids art skills, and partly because she was tired of seeing her own artwork shamelessly defaced. Instead she decided to try to train kids to create public art. She brought parolees into the public art project to help them serve their community service.

Once Golden contracted lupus, however, she decided to move back to Philadelphia in order to be closer to her family in 1984. Her condition has been in remission since then. She has been quoted as saying: "Murals exist at the meeting point of our political, social, and aesthetic worlds." This very much describes what she started in Santa Monica and now does for the city of Philadelphia, where she now lives with her husband Tony Heriza, a filmographer in the Philadelphia area. Golden continues work to combat inner city graffiti in Philadelphia. Her vehicle for this crusade is the Mural Arts Program, originally the Anti- Graffiti Program.

When she moved to Philadelphia in 1984, the newly formed Anti-Graffiti Network hired her. She had worked in the program for about 11 years, when, in 1996, the Anti- Graffiti Network became part of city's Department of Recreation (now The Mural Arts Program). The Mural Arts Program currently is financed for $800,000 from the city of Philadelphia and gets another approximately $1.7 million in various donations from corporate and other foundations. Since the start of the Mural Arts Program there have been 2500 murals painted in "The City of Brotherly Love," which has now been given a new nickname of "The City of Murals." Golden also teaches a course in the Fine Arts at the University of Pennsylvania and used to be on the faculty of Pennsylvania Academy of Fine Arts (PAFA). Her course at Penn focuses on helping to teach students what it is she does and how to go about it. Evaluations of her courses and teaching methods have come back with nothing but positive results. One of her student's evaluations was quoted as saying: "This is one of the best courses I have ever taken." Another said: "Jane Golden is a treasure. Her course is an enriching part of my college career." With the aid of dozens of students over the years and the cooperation of many neighborhoods, the Mural Arts Program of Philadelphia has become one of the most recognized in the world, with close to 2500 completed murals to date.

Golden is the director of this program and as such has been recognized many times throughout the years for her work in the community. This includes being awarded with the Eisenhower Exchange Fellowship, which honors as their website states "Eisenhower Fellowships engages emerging leaders from around the world to enhance their professional capabilities, broaden their contacts, deepen their perspectives, and unite them in a diverse, global community — a network where dialogue, understanding, and collaboration lead to a more prosperous, just, and peaceful world." She was also given the "Distinguished Daughter of Pennsylvania Award" which is an award honoring leadership and contributions of the outstanding women of Pennsylvania. She has also received the Clara Barton Outstanding Humanitarian Award, Women's Way Local Honoree Award for Outstanding Achievement (1996), Mural Arts received the Arts and Business Council Award for Outstanding Business-Arts Partnership (1998), she was the Co-Recipient of the Philadelphia Award (1998), and finally the Outstanding Humanitarian Award of the American Red Cross (1999).

In her rare moments of spare time she has also written and co-written several books. Golden co-authored Philadelphia Murals and the Stories They Tell. This book takes the reader on a guide of the city's murals that the Mural Arts Program has helped to create, along with its wonderful pictures the book also provides personalized stories for each mural, including information about the artist and the neighborhood they were put up in. She has also collaborated on a second book about the Philadelphia murals, More Philadelphia Murals and the Stories They Tell. At the end of the day, Golden still comes home to her house on Brandywine St. in Philadelphia and to her husband Tony to hopefully prepare for an inspiring tomorrow. This is what she has given the city of Philadelphia: inspiration. Jane Golden has taken disheveled buildings and discouraged youth and transformed them as well as their surrounding neighborhoods to take a deeper look at the untapped resources that could possibly lie beneath.