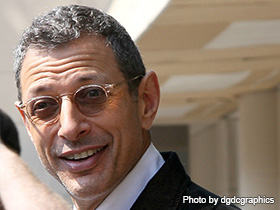 Whitaker native Jeff Goldblum is best known for his roles in The Fly, Jurassic Park, and Independence Day.

Jeff Goldblum was born in the small town Whitaker, Pennsylvania. He attended Taylor Allderdice High school until he graduated and then moved to New York City at the age of 17. Since then, Goldblum has been acting in various films and also in many Broadway shows. Goldblum's acting career shot off after he acted as an aerospace engineer in the movie Into the Night. Right after, he starred as a scientist in the movie The Fly. He then landed bigger roles in; Jurassic Park, its sequel The Lost World: Jurassic Park, Independence Day, Law & Order: Criminal Intent, and Morning Glory.

Jeff Goldblum grew up in the small town Whitaker, Pennsylvania, on the outskirts of Pittsburgh, about three miles away. He earned good grades throughout his high school career, though he pointed out that his high school was not academically challenging. Academics were not his primary concern during high school; he was more interested in sports, acting, and jazz. Goldblum is least known for his interest in jazz, which he picked up from his brother and then learned how to play piano all throughout his childhood. He even started to play at clubs at a young age.

Goldblum moved to New York City when he was 17 to pursue an acting career. After performing in many on- and off-Broadway productions, he finally got a small movie role when he was 22. He was later recognized by Robert Altman during an on-stage performance. Altman gave him a small part in California Split and an even bigger role in Nashville. After these two roles, he steadily won many more minor and major roles.

In 1980, Goldblum made a move into television. He starred in a short-lived comedy show called Tenspeed and Brown Shoe. Goldblum finally got a notable role as a reporter in the movie The Big Chill, which led to larger roles, such as an aerospace engineer in the movie Into the Night. Then Goldblum's first starring appearance was in the movie The Fly, which was released in 1986. Goldblum's most notable character role was lonesome scientist, Seth Brundle, in the movie The Fly. His performance in the movie was captivating to many critics. In the beginning of the film, he plays a lonely eccentric scientist who uses his scientific breakthroughs as a way to pick up chicks. Then in the end, he plays a sub-human who vomits up enzymes to liquefy his food. His character brought out sadness, tragedy, and intimacy throughout the entire film. Critics say that this was the best Jeff Goldblum movie in his career thus far. He also met his second wife, Geena Davis, while working on The Fly, since she also starred in it. However, they divorced in 1990. After The Fly was such a hit, he eventually moved into large roles in Jurassic Park and Independence Day.

Goldblum also acted in Steven Spielberg's movie, Jurassic Park. He portrayed a mathematician whose basic premise was to walk around with the group of main characters while uttering vague philosophical imprecations. Goldblum failed to bring out his character into the film because the character he played served no purpose to the story. In the sequel, The Lost World: Jurassic Park, Steven Spielberg turned Goldblum's previous character into a main-character. Goldblum's character finds himself returning to the island full of dinosaurs. But this time, he takes along an equipment specialist and tries to shoot a video documentary to earn money. His character offered much potential for the plot and also stimulated many action-packed sequences throughout the entire movie. Critics believe that Jeff Goldblum's role in the sequel to Jurassic Park was notably better than the first, since his character had more of a reason to be in the story.

In 2009, Goldblum replaced Chris Noth's character as a senior detective on the popular show, Law & Order: Criminal Intent. He left the show in 2010. Some of Goldblum's latest film endeavors include the 2010 movie, Morning Glory, where he portrays a news executive tasking Rachel McAdams's charcte with improving ratings. He also starred in a 2010 romantic comedy called The Switch, which is about a major mix-up regarding artificial insemination. Both movies received mixed reviews from critics.