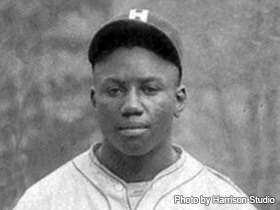 Josh Gibson, nicknamed the "Black Babe Ruth," spent the majority of his career with the Homestead Grays.

Joshua Gibson was born December 21, 1911, in Buena Vista, Georgia. Gibson's parents, Mark and Nancy Gibson, worked as sharecroppers in Georgia for most of his early life. In 1921, Gibson's father, Mark, traveled to Pittsburgh, Pennsylvania, and began working in the Carnegie-Illinois steel mill. By 1924, Mark Gibson saved up enough money to bring his family up to live with him in Pittsburgh's North Side. After grade school, Josh Gibson enrolled in vocational school to study to become an electrician, but he did not last long there. At the age of 16, Gibson went to work in a steel mill and began playing third base for Gimbels A.C., the amateur baseball team. Gibson excelled in playing for Gimbels A.C., and he caught the eye of Harold Tinker, owner of the semipro baseball team the Crawford Colored Giants. Gibson started playing for the Colored Giants in 1930. Shortly after joining the Colored Giants, Gibson married his girlfriend, Helen, at the age of 17. Gibson played for the Colored Giants from 1929 to 1930, and this started the famous baseball career of Josh Gibson.

In 1930, Josh Gibson hit one of the longest home runs in the history of baseball. The home run allegedly traveled over 500 feet and was the longest ball ever hit at Yankee Stadium. This home run helped the Grays win the Negro League's Championship in 1931. In 1932, Gibson was lured away from the Grays with the promise of a $100 a month signing bonus if he joined the Pittsburgh Crawfords. Gibson continued his incredible hitting, racking up an amazing amount of home runs with the Crawfords. Gibson was named the Negro League batting champion in 1936 while playing for the Crawfords. He played for the Crawfords for four years until he left for the Dominican Republic with teammate Satchel Paige. He joined the Trujillo Dragons there and played for a year before returning to the Homestead Grays in 1937.

Gibson won his second Negro League batting title in 1938 with the Grays. He also helped the Grays win two more Negro League Championships in 1938 and 1939 before leaving for the Mexican League. He played for Veracruz in Mexico from 1940 to 1941. In 1942, Gibson returned to the Homestead Grays for a final time. In 1942, Josh Gibson won his third Negro League batting championship, and he later won a fourth batting crown in 1945. Gibson was nicknamed the "Black Babe Ruth" during his dominating run of ten consecutive years of leading the Negro National Leagues in home runs. Josh Gibson played for the Homestead Grays for four more years until 1946, ending his professional baseball career.

Josh Gibson had a dark side that was exposed near the end of his life. By 1942, Gibson's physical and mental states were beginning to crumble. In 1943, he suffered a nervous breakdown and was sent to the hospital. Gibson was never the same after that; he started drinking constantly but continued to play baseball. Gibson suffered a fatal stroke on January 20, 1947, at his home in Pittsburgh, Pennsylvania. Josh Gibson was posthumously inducted into the Baseball Hall of Fame in 1972.