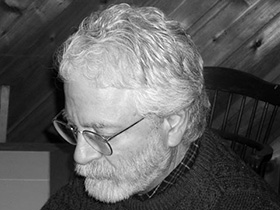 Growing up in the outskirts of Pittsburgh, Robert Gibb observed the effect the steel industry had on shaping the community, as well as its impact on the character of the region. Much of his poetry is attributed to these experiences. He graduated from Kutztown University with a BFAin 1971, received his MFA in 1974 from the University of Massachusetts, and two years later, his MA from Lehigh University. He later completed his PhD at Lehigh. Gibb's poetry is noted for its solemn tone paired with evocative and vivid, yet realistic, imagery. In 2011, he was a featured poet in the Public Poetry Project of the Pennsylvania Center for the Book.

Robert Gibb was born on September 5, 1946, in Homestead, Pennsylvania, just outside of Pittsburgh, to parents Robert James and Helen Gibb. Because of his close proximity to the city, Gibb was able to survey the effect the steel industry had on the local economy, the community, and the surrounding region. Many members of his family worked in the steel trade, including his father and grandfather, the latter dying in a devastating factory accident when he was only thirty-five. Gibb himself worked in the steel mills for a time, too, and all of these occurrences would become a major part of his later poetry, especially his Homestead Trilogy (also referred to as the Pittsburgh Trilogy), which consists of three collections that probe the industrial history and culture of America's Steel City.

Gibb attended Kutztown University in central Pennsylvania, where he received his B.F.A in 1971, and then went on to the University of Massachusetts for his M.F.A. After he received his M.A. from Lehigh University in 1976, Gibb published his first book of poetry entitled Whale Songs, which studied the unique form and qualities of whales. He continued to publish many volumes of poetry during the next decade, and became the editor for the literary journal Yarrow in 1981. He worked as the editor for the journal until 1983, and married Margaret Lewis in 1985.

In 1998, Gibb published the first book of what would become the Homestead Trilogy. The Origins of Evening is described as part autobiographical and part historical, which all three of the volumes seem to have in common. Many of his poems reflect deeply on personal experiences. Gibb has said of the Trilogy:

"Being interested in a place and having seen the effects brought by the end of the Industrial Revolution on the steel towns south of Pittsburgh, I am in the middle of a design, conceived for three books, in which autobiographical material gradually gives way, or knits into, larger, historical concerns and the preserving of cultural memory."

Critically acclaimed, Gibb has been hailed as one of the great American contemporary poets. Critic Michael Waters says of What the Heart Can Bear: Selected and Uncollected Poems, 1979-1993, "Gibb is one of the folks to whose work I turn to when I seem to forget how poems are written, or how they should be written. This book belongs among those worn American classics crammed on the rough-hewn shelf nailed onto the mudroom wall."

Furthermore, Peter Oresick, of the Pittsburgh Post-Gazette describes the Homestead Trilogy as "mostly short and lyrical, revealing a careful craftsman working within traditional forms. The poems are rich with sounds. They look elegant in their lines, breaks and stanzas upon the page." Many reviewers praise his attention to the musicality of the language and beautiful and realistic imagery he employs in his poems. In "In the Emergency Room," from The Burning World, Gibb describes taking his four-month-old son to the hospital:

So we bundled him into Sacred Heart

And sat huddled in the emergency room, praying

The small fronds of his breathing would loosen

Into light. Outside, the gray shades of buildings

As it emptied into the whole of the winter night.

The somber use of color is effectively used to portray the anxiety being felt. Moreover, critic Stephen Behrendt stated that Gibb's poetic artistry in The Burning World "unites beautifully wrought language and imagery with an engaged and committed world-view in a poetry that is as intellectually profound as it is aesthetically satisfying."

While Gibb is primarily known as a poet, he has also published essays and short stories in many literary periodicals. He has received many honors and awards for his literary undertakings, including the Award of Merit, Camden Poetry Award, Devil's Millhopper Press Chapbook contest, two National Endowment for the Arts poetry fellowships, a National Poetry Series Award, multiple Pennsylvania Council on the Arts literary fellowships, the Phillips Poetry Award, the Pushcart Prize, and the Wildwood Prize in Poetry.

His resume boasts an extensive teaching career, with professorships at Cedar Crest College in Allentown, Pennsylvania, where he was a poetry teacher; and teaching positions in creating writing at Carnegie Mellon University, Lehigh University, and the University of Pittsburgh.

In 2012, his collection, Sheet Music, was published and is described by Pittsburgh City Paper writer, Fred Shaw, as "a tour through local art, jazz, and other touchstones. ... [The collection] often feels like a field trip with a sharp-eyed uncle as Gibb leads the reader throughout the city and asks us to rely on his speaker's description of places familiar, not exotic. Reading its 97 pages is a bit like taking a tour of the city (minus the incline ride), as poems are set at the Zoo, Frick Park and Point State Park. The accessibility of these settings reminds us that culture includes shared moments with others."

Gibb's poem "Steelworkers' Lockers: Pittsburgh Historic Center," from World Over Water (2007), was selected for publication by the Public Poetry Project of the Pennsylvania Center for the Book in 2011.

Recently, Gibb's work has been featured by Ted Kooser in his syndicated column, American Life in Poetry (2013), and his new collection, The Empty Loom: Poems by Robert Gibb, is forthcoming (2013).

Robert Gibb has two sons and currently lives with his wife in Homestead, Pennsylvania, where he continues to teach and write.