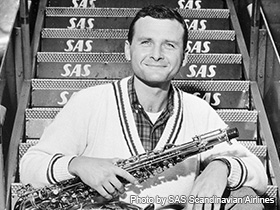 Stan Getz was born on February 2, 1927, in Philadelphia, Pennsylvania. His interest in music began at the age of 12. After playing several side jobs at fraternity parties and jobs around the town, he got his first real job at the age of 15. Early in his career he began his soon to be addiction to alcohol and heroin. Throughout his career he played with many legendary jazz musicians and helped to define bebop and the bossa nova. He became one of the most influential tenor saxophonists in jazz. During his career he married twice and had several children. In 1988, Getz was diagnosed with liver cancer. He died June 6, 1991, in Malibu, California.

Stanley "Stan" Getz was born on February 2, 1927, in Philadelphia, Pennsylvania, to Goldie and Al Getz. Getz had a younger brother, Robert. When it was time for Getz to start school, his mother set almost unreasonable standards for him to achieve. When he didn't reach the standards set for him, he felt somehow unfulfilled. Getz discovered his love for music at a very young age when the family would visit a friend who had a piano. He found he was able to play a song perfectly after listening to it on the radio. He started playing harmonica, then moved to bass for his school orchestra, and finally learned to play the saxophone, which he immediately fell in love with. He practiced for eight hours a day and saved his money to take weekly lessons. The tenor saxophone became his favorite instrument. He held several jobs during the school year, which included being a busboy and a musician. He played sax anywhere that he could get hired. Such places included fraternity parties and Saturday Night Hops. He often came home at breakfast time because after many of his performances, he would find jam sessions at which to play with other musicians where they would play jazz and do a lot of improvisation.

By the time Getz was 15-years-old, he was hired by Dick Rogers to play with his band full time. Getz was able to convince his parents to let him drop out of school. This was not a hard task to accomplish because Getz would get paid $35 per week, which was money the family desperately needed. Rogers, however, was forced by an officer to fire Getz since he was underage. Getz found another job with Jack Teagarden traveling and playing with his band, and was nearly forced to go home for the same reason he was fired from Rogers' band. However, Teagarden convinced the officer to let Getz stay with the band under two conditions: that Teagarden would become Getz's guardian, with the consent of Getz's parents, and he had to give Getz weekly lessons. Getz remained with Teagarden until Teagarden became ill and moved to Los Angeles. It was here that Getz met Stan Kenton. Kenton asked Getz to fill in for one of the two open sax positions in his band, an offer which Getz immediately accepted. During his time with this band, Getz was drawn toward Lester Young's music. He memorized all of Young's solos and melodies. It was also with Kenton that Getz began his addiction to alcohol and heroin, two addictions that would follow him throughout his life. Getz remained with Kenton's band for almost a year before quitting. He then worked with several bands, including those of Jimmy Dorsey and Benny Goodman, and leading a trio where he first learned of the new progressive jazz form, bebop.

He joined Woody Herman's Second Herd in 1947, which was very influential and helped propel him even more into the spotlight. There were memorable times during the Second Herd era. One was the recording of "Four Brothers," a chart-topper written by Jimmy Giuffre. The saxophone section in the Herd, consisting of three tenor saxophones and one baritone saxophone, created a sound that was incredibly light and textured. The sax section, which consisted of Getz, Sims, Chaloff, and Steward, became known as the Four Brothers. The other memorable time was the recording of the fourth part of "Summer Sequence." The recording of "Early Autumn" was another landmark, although this song was not released until after Getz left the Second Herd. These pieces are important landmarks in Getz's career because they show his own style. He no longer played the borrowed sounds of the players from his early years, but had finally created his own sound. The beauty of his melodies and tones earned him the nickname "The Sound." His sound, which broadened and deepened as his career progressed, had very distinctive textures such as airiness overlaid with hoarseness, something that perhaps only players of Getz's caliber could perform. He mastered dynamics in music to show his emotion. Lester Young once said that Getz could sing songs on the tenor sax.

During the 1950s, Getz spent time in Europe, mostly touring Sweden, and freelancing in New York, playing in clubs such as Birdland, named for the famous alto saxophonist Charlie Parker. When he finally made his return from Europe to the United States in the early 1960s, he paired up with guitarist Charlie Byrd to help usher in a new Brazilian style of jazz, the bossa nova, which was a hybrid of jazz and samba. The duo recorded Jazz Samba, which was the second highest seller, only being beaten to the first place spot by the Beatles' A Hard Days' Night. He did, however, win a Grammy Award for "Desafinado" from the Jazz Samba album for Best Jazz Solo Performance. Getz recorded an even bigger hit "Girl from Ipanema" with João and Astrud Gilberto. The Getz/Gilberto album won an Album of the Year honors award for "Girl from Ipanema." The album also won the Best Engineered Recording and Getz won an award for Best Instrumental Jazz Performance.

After recording a few records of bossa nova and working with some small groups that included Chick Corea, Gary Burton, and Steve Swallow, he spent a few years, from 1969 to 1971, in Europe in partial retirement. He returned once again to the United States in 1972 and led small groups. He also experimented with other types of jazz, such as synthesized and fusion jazz. However, after a few years, he returned to his original bebop and swing style. From 1985 to 1988, he was an Artist-In-Residence for Stanford University.

During his career, Getz married twice, once to Beverly Byrne, the second time to Monica Silfverskiold, and divorced both women. He also had several children: David, Stephen, Beverly, Pamela, and Nicolaus. Two men also claimed to be Getz's illegitimate sons, Steve Pettijohn and Peter Torgner, but his family denies their claims.

In 1988, Getz was diagnosed with liver cancer; however, he still continued to play for as long as he could. Despite a surgery that led to false hopes of the cancer's remission, the cancer remained malignant. He won his fifth and final Grammy as Best Jazz Solo Performance for 1991. In April 1991, he suffered a severe hemorrhage. On June 6, 1991, Stan Getz passed away in Malibu, California.