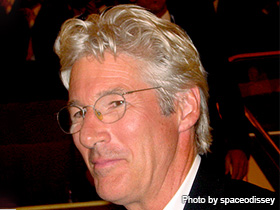 Actor and activist Richard Gere starred in An Officer and a Gentleman and Chicago.

Born in Philadelphia, Pennsylvania, on August 31, 1949, actor, photographer, and humanitarian Richard Gere was raised in Syracuse, New York. After attending the University of Massachusetts in Amherst for two years, he dropped out to pursue an acting career. Known for both his good looks and talent, he has performed in many plays and in even more films, including American Gigolo, Pretty Woman, and Chicago. Among his accomplishments are number of awards for both his acting and his humanitarian work. He married and divorced model Cindy Crawford and currently lives in New York with his wife, actress Carey Lowell, and their son.

On August 31, 1949, Richard Tiffany Gere was born the second of five children to Homer and Doris Gere, in Philadelphia's Presbyterian Hospital. His grandparents were Pennsylvania dairy farmers, and at the time he was born, his father, an insurance salesman, was studying business at the University of Pennsylvania. While Gere was still a toddler, he and his family moved to Syracuse, New York, where his artistic abilities began to emerge while he was in high school; he played a number of instruments and wrote music for his school's productions. He graduated from North Syracuse Central High School in 1967 and then attended the University of Massachusetts in Amherst, where he received a gymnastics scholarship and majored in philosophy. After two years of college, he dropped out in order to pursue acting and served as an understudy in the New York production of Grease, then landed the role of Danny Zuko in the London production. Following this, he had roles in a number of productions both on and off Broadway and began appearing in movies at the same time.

After appearing in a number of small roles in movies, Gere gained recognition for his role as Tony LoPorto in Looking for Mr. Goodbar, a 1977 film. Tony is a small time criminal and lover of the protagonist, Theresa Dunn, a teacher of deaf children who becomes addicted to sex and drugs. At one point, Tony turns her in to the police, and in the end she is murdered by a man she picks up at a bar.

In 1978, after attending the film festival at Cannes, he went to India and Nepal, where he was inspired to begin his humanitarian work as an advocate on behalf of the Tibetan refugees. He was touched by the people he met there. Carrie Rickey quotes him as saying, "Their minds and hearts were different from anything else I had previously encountered. They thought and spoke in terms of community, not of self. When they spoke of 'our minds,' they pointed to their hearts." After this experience, he had a leading role in the 1978 Oscar-winning film Days of Heaven, for which he won a David di Donatello Award, Italy's equivalent of an Academy Award. He played Bill, a man who travels from Chicago to Texas with his lover. The lover pretends to be his sister to escape poverty, and the pair end up as parts of a love triangle with a farmer for whom they work.

He returned to Broadway in 1979 to perform in Bent, in which he portrayed a concentration camp prisoner, earning him the 1980 Theater World Award. Also in 1980, Gere played what many consider to be his breakthrough role as Julian Kay, the sympathetic and vulnerable escort in American Gigolo. Film critic Roger Ebert praised this film, noting that it "has a winning sadness about it; take away the story's sensational aspects and what you have is a study in loneliness. Richard Gere's performance is central to that effect." This was followed by his success in 1982's Oscar-winning film, An Officer and a Gentleman, for which he received a Golden Globe nomination. Gere plays Zach Mayo, a Naval Aviation officer candidate struggling to make it through introductory training. Brian Webster, editor of the Apollo Movie Guide, describes Gere in this role as "inscrutable for the first two-thirds of the film, break[ing] through with credible emotion in a powerful scene set during a weekend of penance for his corrupt ways."

In the 1980s, Gere also began advocating for those with HIV/AIDS, telling the Philadelphia Inquirer, "As soon as you commit yourself to film, you forfeit your life as a private person. But the upside is that being a public figure enables you to more powerfully express your personal interests in the kind of activities you pursue."

In 1990, Gere starred alongside Julia Roberts in Pretty Woman, a movie that Roger Ebert called "the sweetest and most openhearted love fable since The Princess Bride," and he earned a People's Choice Award. Gere takes on the role of Edward Lewis, a ruthless businessman, who hires prostitute Vivian Ward (Roberts) to accompany him to business events; the two ultimately fall in love. In his review for Pretty Woman, Ebert also named Gere "Hollywood's most successful male sex symbol," a title that People Magazine would formally recognize him for a few years later. It was in 1991 that Richard Gere wed for the first time, marrying model Cindy Crawford on December 12. That same year, People chose Gere as one of the 50 Most Beautiful People in the World. Amid a frenzy of attention focused on Gere's good looks, he founded The Gere Foundation (1991), a non-profit organization concerning international humanitarian issues with a focus on Tibet. In 1992, he became the first man to be on the cover of Vogue Magazine, appearing with Crawford; the only other men to be featured on Vogue's cover to date are George Clooney, and LeBron James. He appeared in People again in 1993 when the magazine named him and Crawford the Sexiest Couple; two years later, the couple divorced.

In 1996, Gere appeared in another award-winning film, Primal Fear, which tells the story of Gere's character, high-profile lawyer Martin Vail. Vail takes on a case in which a teenage boy is accused of murdering an archbishop. The following year, Gere published his first book, Pilgrim, which is a book of photographs that he took while in Tibet and has a foreword by His Holiness the Dalai Lama, a figure who Gere both reveres and calls a friend. Then 1999's Runaway Bride paired Gere and Roberts together for a second time; the movie earned numerous awards and a Blockbuster Entertainment Award nomination for Gere in the category of Favorite Actor in a Comedy/Romance. Gere's character, newspaper reporter Ike Graham, is assigned to write a story about Maggie Carpenter (Roberts), who is known for leaving various men at the altar an impressive number of times. In true romantic comedy fashion, the two fall in love and successfully wed. In 1999, Gere was once again recognized by People Magazine, this time as the year's Sexiest Man Alive.

After his divorce from Crawford, Gere began dating actress Carey Lowell. On February 6, 2000, the couple had a son named Homer James Jigme (which means "fearless" in Tibetan) Gere, making Richard Gere a first-time father at the age of 50. That same year, Gere was bestowed the Career Achievement Award from the Chicago International Film Festival. Gere had a notable year in 2002; he starred in two successful films and wed Lowell on November 9, 2002. The first of these films was The Mothman Prophecies and the second was the acclaimed musical Chicago. The first is about journalist John Klein (Gere's character), who finds himself investigating the existence of Mothman after his wife claims to see it while the couple are involved in a car crash that ultimately results in her death. In Chicago he played the role of charismatic lawyer Billy Flynn, a part that required him to not only sing but also tap dance, which he prepared for by spending five months training before filming. Flynn, boasting a perfect court record, takes on high-profile cases, including those of two media sweetheart murderesses Velma Kelly and Roxie Hart in 1920's Chicago. Although Gere got his start in musicals, many believed he took a considerable risk in taking this role, a risk that paid off and earned him three awards, including a Golden Globe and an additional three nominations.

Gere is currently living in New York with his wife and son and continues to act in films in addition to pursuing humanitarian work. More recently, Gere was nominated in 2011 for the Black Reel Award pertaining to Best Ensemble for Brooklyn's Finest (2009). He won the title of the 2007 Hollywood Film Award Actor of the Year from the Hollywood Film Festival and the Joel Siegal Award in 2009 from the Broadcast Film Critics Association. In November 2007, Gere was honored with the ninth Marian Anderson Award, which recognizes artists who have championed human rights. It was presented at The Kimmel Center for the Performing Arts Philadelphia. According to Bobbi Booker's article "Celebrating Actor's Humanitarian Work," Mayor John F. Street stated, "His accomplishments as an actor are only surpassed by his accomplishments as a humanitarian and as an advocate for human rights issues around the world. We are particularly pleased to honor Mr. Gere this year as it will mark the first time that the Marian Anderson Award will be conferred upon a native Philadelphian."