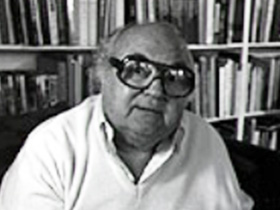 Playwright Samuel Gallu was born in 1918. He studied at the Pennsylvania State University (Penn State) and was a veteran of the famous dance band Fred Waring's Pennsylvanians. Gallu also served in World War II. After the war he worked extensively in television, including a stint as a producer of the children's show, Howdy Doody. His most famous literary production was the one-man play, Give `Em Hell, Harry (1975), about former President Harry Truman. He also served in World War II as a lieutenant commander in the Navy and was given the Distinguished Public Service Award by the Department of the Navy. Gallu died in 1991 in Doylestown, Pennsylvania.

Samuel Gallu was born in Woodbine, New Jersey, on March 21, 1918. He married Harriet Trangmar Gallu, with whom he had four children: Simeon, Christopher, Timothy, and Elizabeth.

Gallu received his bachelor's degree in Arts & Letters from the Pennsylvania State University (Penn State) in 1940. Following graduation he became a member of the singing group Fred Waring's Pennsylvanians. When his chorale career came to a close, Gallu suited up as a Naval Midshipman in the V-T program at Columbia University. During his two and a half years aboard an aircraft carrier, he served his country and gathered information he later used in his writings. For their efforts in World War II, Gallu's unit was awarded the Presidential Unit Citation. After ending his distinguished naval career, Gallu focused his efforts on a more lighthearted subject and helped produce the television show, Howdy Doody. While working on the popular children's show, he was accepted by the Metropolitan Opera Workshop as a tenor. In 1949, he appeared as a tenor soloist with the NBC Symphony Orchestra under the direction of Arturo Toscanini.

As a writer, Gallu's most notable work was his play Give 'Em Hell, Harry (1975). The one-man play is based on Harry S. Truman. Gallu once said he was inspired to write a play about Truman because of the "honesty of the guy." The piece was produced on Broadway in 1975 and starred James Whitmore as Truman. It spoke to audiences throughout the world and was performed in England, West Germany, and Israel. The play's success led to a film version that also starred James Whitmore. Gallu also wrote Churchill: A Man Alone, a play starring Roy Dotrice that eventually toured the country in 1979. He was also a writer for radio and television for his Hollywood production company, Gallu Productions, which he created in the early 1950s. Gallu's company created television series, such as Border Patrol, Navy Log, and The Blue Angel. He produced 279 television programs.

In celebration of America's 200th birthday, the Bicentennial Theatre of Philadelphia commissioned Gallu to write a play commemorating an important part of American history. He was also awarded military honors for his efforts in World War II, where he served as a lieutenant commander in the Navy. The Department of the Navy gave Gallu the Distinguished Public Service Award, its highest civilian citation, for his efforts in the Pacific.

At the age of 73, Gallu died on March 27, 1991, in Doylestown, Pennsylvania. His son, Simeon, said he died of complications from prostate cancer.