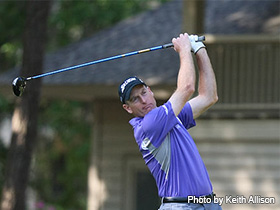 Winner of the 2003 U.S. Open, golfer Jim Furyk was born in West Chester.

Jim Furyk was born in West Chester, Pennsylvania, on May 12, 1970. He is the son of Mike and Linda Furyk. When Furyk was seven, his father taught him how to golf. Following graduation from Manheim High School, Furyk attended the University of Arizona. Furyk led his college golf team to the NCAA finals during his senior year. The year 1992 marked Furyk's debut season as a professional on the Nationwide Tour. Furyk then qualified to play with the world's best on the PGA Tour in 1993. In 2003, Furyk captured a major championship winning the U.S. Open Championship.

Jim Furyk was born in West Chester, Pennsylvania, on May 12, 1970. He is the son of Mike and Linda Furyk. Furyk's father, Mike, was the head golf professional at a small golf course outside of Pittsburgh, Pennsylvania. Quitting shortly before Furyk was born, his father Mike worked as a golf club salesman in West Chester. His father taught him the game when he was seven-years-old. Putting emphasis on feeling his swing rather than on the mechanics of the swing, Furyk acquired an odd loop in his swing. He is known to this day for having an awkward swing and for being mentally tough. "You know who I would love to play with? Jim Furyk, you can't believe how tough this guy is," said Tiger Woods.

Furyk attended Manheim High School. He was a junior member at Meadia Heights Country Club. Furyk was known for his exhaustive work ethic. He could be seen all hours of the day practicing his short-game and hitting practice balls on the range. During high school, Furyk would play on the varsity golf and varsity basketball teams. In 1987, Furyk would win the Pennsylvania State Golf Championship. Recording a 36-hole score of 139, Furyk won by 15 shots.

Following graduation from Manheim High School, Furyk would attend the University of Arizona. There he would play on the golf team for four years. Furyk was seen as an average golfer for the first three years at Arizona. During Furyk's senior year, he would lead his team to the NCAA Men's Varsity Golf Championship.

In 1992, Furyk turned professional and earned his right to play on the Nationwide Tour. Playing on this tour for only one year, he won one tournament, the NIKE Mississippi Gulf Coast Classic. At the end of the 1993 season, Furyk attended qualifying school, also known as Q-School, for the PGA Tour. He finished the grueling six round event and received one of the last tour cards for that year.

During Furyk's first year on the PGA Tour, he worked his way into 78th place on the money earnings list and gained his right to retain his PGA Tour card for the following year. In 1995, Furyk's second year on tour, he won his first PGA Tour event, the Las Vegas Invitational. Furyk continued to win the Las Vegas Invitational two more times after that. In 1997, Furyk broke the record of earning the most amount of money without winning an event. This feat goes to show why Furyk is revered as one of the most consistent golfers on tour. That same year, Furyk returned to the Nationwide Tour and won the Argentine Open. He averaged about one win per year, until he entered the 2003 season. In 2003, Furyk won two tour events, including a major championship, the U.S. Open Championship. The U.S. Open was held at Olympia Fields Country Club in Olympia Fields, Illinois. Furyk tied a U.S. Open record for the all time low score for the tournament with a score of 272 (-8). This is one of the biggest accomplishments of Furyk's career. An honor held by only the elites of golf, Furyk's victory propelled him to become ranked the fifth best player in the world. After suffering some injuries to his wrist and missing a portion of the 2004 season, Furyk was thought to be losing touch with his golf game. However, Furyk bounced back in 2005 and 2006. He recorded his best year in 2006, winning the Vardon Trophy by leading the PGA Tour with the lowest scoring average of 68.86. Furyk was also the second leading money winner of the season.