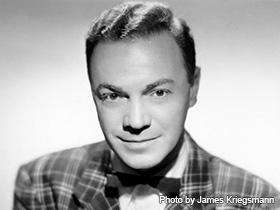 Known as the disc jockey who coined the term ?rock and roll,? Alan Freed was born in Johnstown.

Albert James Freed was born in Johnstown, Pennsylvania, on December 15, 1921. Freed was one of the first well-known disc jockeys and became known as the "king of rock and roll," because he coined the term while broadcasting a radio program. Freed worked at many radio stations over the duration of his career, some of them in Pennsylvania, such as WKST radio in New Castle. He then hosted the first rock concert, "The Moondog Coronation Ball," and helped various artists start their careers in rock and roll. Freed grew to be a famous disc jockey, and even starred in musical films and television shows. However, he was later involved in a scandal, which resulted in Freed being fired and moving to California where he died in 1965.

Albert James Freed, also known as "Alan," was born on December 15, 1921, in Johnstown, Pennsylvania, to a Welsh mother and Lithuanian father. In 1933, Freed and his family moved to Salem, Ohio, where he attended Salem High School. Freed always had enjoyed music and, at his high school, he played the trombone in a band called the Sultans of Swing. Freed had a great interest in radio and accepted his first broadcasting job in 1942 for WKST radio in New Castle, Pennsylvania. Freed later became a sportscaster in Youngstown, Ohio. After starting his career, Freed married Betty Lou Bean in August of 1943, whom he later divorced.

Freed then left the WKST station in 1944 to work in Philadelphia for WIBE radio. In 1945, Freed's career took off when he became the people's favorite broadcaster in Akron, Ohio, working for WAKR radio, where he played primarily jazz and pop music. In 1949, Freed met record storeowner, Leo Mintz, who helped Freed make a popular radio program with R&B (rhythm and blues) records on WJW radio. On July 11, 1951, Freed was nicknamed "The Moondog" on the show that he deejayed.

Later on in March 1952, Freed held the very first rock concert, "The Moondog Coronation Ball" in Cleveland Arena. Most of the people who listened to Freed were black; however, this concert helped to get more whites involved in R&B music. More then two times the capacity of the arena showed up, and when the crowd became unruly and pushed the gates down to get into the concert, it was cancelled. At this time rhythm and blues was renamed by Freed "rock and roll" in order to break down the racial prejudices against R&B music. Not only did "Rock and roll" break down racial barriers, it was a very important movement in music, especially for teenagers of the time. Rock and roll allowed teenagers to have their own individual taste in music, instead of their parents' musical taste, and many idolized Alan Freed.

Freed held many dances, concerts, and radio programs in order to introduce "rock and roll" legends such as Little Richard, Buddy Holly, Frankie Lymon and the Teenagers, and Bill Haley and The Comets. Freed's latter career then sparked a series of stage shows, his own television program on ABC, and even several rock and roll films. These short musical films included, Mr. Rock and Roll, directed by Charles Dubin, and Rock! Rock Rock!, directed by Wil Price. Freed continued working for many radio stations until he was charged with accepting money from record companies to play their records. This was in November of 1959 and became known as the "broadcasting payola" scandal. He was then fired from his job and was fined $300 for two counts of commercial bribery.

Freed's life went downhill when he began drinking and losing his disc jockey jobs in Miami and New York. Freed moved to Palm Springs, California, where he became ill from cirrhosis of the liver and bleeding of the esophageal varices. Freed died at the age of 43, on January 20, 1965, at his home in Palm Springs. Freed was inducted to the Cleveland Rock and Roll Hall of Fame in 1986 and the Radio Hall of Fame in 1988. In 1991, Freed was also given a star on Hollywood's Walk of Fame at 6381 Hollywood Boulevard.