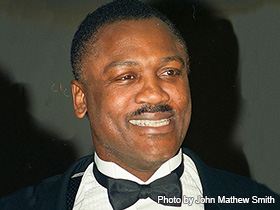 Joe Frazier, born January 12, 1944, in South Carolina, lived in the country as the son of a sharecropper before his family moved to Philadelphia. His boxing career started accidentally after going to a gym to exercise. After fighting competitively for a few years, he won the Olympic Gold Medal in 1964 and turned pro. He secured a heavyweight title in 1968 and later became the undisputed champion. After accidentally mismanaging some land investments and losing most of his fortune, Frazier now lives in an apartment above his gym in Philadelphia.

Born January 12, 1944, in Beaufort, South Carolina, Joe Frazier's father bootlegged alcohol and grew marijuana or tobacco in a private garden bed to support the family. Still, the Frazier family lived in poverty and none of his brothers or sisters had more than two shirts. The neighborhood men watched boxing every Wednesday on TV and Frazier imitated the boxers at times. One of the neighbors told Frazier's father that he would be the next Joe Louis and from that point on Joe Frazier wanted to be the World Champion. At age 15, Frazier went first to New York City, once the boxing capital, to stay with his brother. The price of living proved too high and he could not earn enough despite stealing cars for cash and going job to job. Joe Frazier then decided to move to Philadelphia and live with his uncle and cousins. He finally felt at home, worked, and could spend plenty of time on boxing. With the help of trainers, Frazier became one of the best amateur heavyweights in the nation. In the 1964 Tokyo Olympics, Joe Frazier won the Olympic Gold Medal despite breaking a finger before the final bout. He turned pro under the guidance of Yank Durham in 1965.

Frazier, with his bob and weave boxing style and brutal left hook, tallied 11 straight wins. In 1966 he faced a strong opposition in the Argentine Oscar Bonavena. Joe Frazier won the 10 round bout with a unanimous decision despite being knocked down twice in the same round. He later closed out the 1967 campaign with a total professional record of 19-0. With the championship belt vacant after Muhammad Ali's imprisonment, Joe Frazier faced Buster Mathis, an old nemesis from the amateur days, in an elimination tournament. He won by technical knockout (TKO) in the 11th round and won the WBC world title. Frazier even unified the belts after another TKO victory over Jimmy Ellis, the then WBA champ. In the summer of 1970, Muhammad Ali, however, was granted his boxing license back and demand from boxing fans grew for a showdown between the now-reigning king, Frazier, and the former undefeated champion. The purse for the match became an unheard of $2.5 million for each boxer. On March 8, 1971 before a sellout crowd in Madison Square Garden the two battled fiercely for 15 rounds. Frazier caught Ali with the most famous left hook in boxing history sending him to the canvas for a four count. Frazier successfully defended the title by a unanimous decision. He suffered a lot of damage, however, and did not fight for the rest of the year. This fight became known as the "Fight of the Century."

Frazier decisively lost his third title defense after the Ali fight to George Foreman by TKO in the second round in Kingston, Jamaica. Frazier won his next match but lost a 12 round decision to Ali in their rematch. After a few more victories, Frazier had a shot at Ali's title in 1975's "Thrilla in Manila," but again lost when his corner threw in the towel after 14 rounds due to their boxer's severely swollen eyes. Nine months later a rematch against Foreman was all the stood between Frazier and another title contention but he was stopped in five rounds. Again, five years later he staged a one-bout comeback but drew with an unknown fighter. He hung up the gloves for good and turned his attention to his children and his gym around the Stanton section of north Philadelphia.

Among the number of his sons who turned to boxing for a professional career, the elder Frazier trained Marvis, a then-challenger to heavyweight champ Larry Holmes in the 80s. He also trained Jackie Frazier-Lyde, his daughter, who fought Muhammad Ali's daughter, Laila Ali, and lost. Frazier, with help, wrote his autobiography, Smokin' Joe, for which he has been widely criticized for nasty comments about Ali. In 2003 Joe Frazier filed a lawsuit over a 140 acre plot of land that he had bought. Frazier says the land was sold without his knowledge, and without a secure mortgage the trust defaulted and he never received full payment either. Frazier's story has been portrayed loosely in Rocky he has made numerous cameos on TV and in video games. Two of his three bouts with Ali have been considered the best boxing matches of the 20th century, and he is on the top ten best heavyweights list of most boxing analysts, including Hall of Fame writer Bert Sugar. Joe Frazier's professional record stands at 32-4-1 with 27 wins by knockout, and he currently resides in an apartment above his gym in Philadelphia.