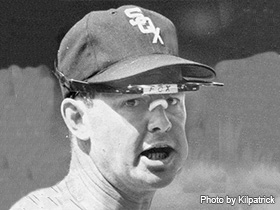 St. Thomas native Nellie Fox was a Hall of Fame second baseman for the Athletics and other teams.

Nelson Jacob Fox was born in St. Thomas, Pennsylvania, on December 25, 1927. Despite his small stature, "Nellie" excelled throughout his youth on the diamond and signed with Philadelphia A's. Soon after acquiring the second basemen, he was traded to the Chicago White Sox where he spent the prime of his career. Fox received numerous honors including, three Gold Glove Awards, 13 All-Star appearances, and in 1959, he captured the American League MVP Award and played for a World Series Championship. After being diagnosed with cancer, Fox died in 1975. In 1997, Fox was enshrined in the National Baseball Hall of Fame.

Nelson Jacob Fox was born in the small, rural, south central Pennsylvania town of St. Thomas on December, 25, 1927. Known to his family and friends as "Nellie," Fox's childhood was much like other boys of the 1940s, filled with the love of the outdoors and especially the game of baseball.

Fox thrived on competition despite his small build; however, he made out just fine with natural gifts of speed, strength, and coordination. He constantly worked on these skills to improve his abilities, baseball was his passion. One of the first accounts of Fox's talent was displayed at the age of nine, when he took center stage as a pinch hitter for the St. Thomas town team, reaching first base on a line drive single.

As Fox entered his teen years, it was not long before he was recognized as the best ball player in St. Thomas. He was very fortunate in 1944 to try out for the Philadelphia Athletics at their nearby training facility in Frederick, Maryland. Due to the vast number vacancies in professional baseball because of World War II, Fox believed he had a shot to enter the elite ranks of Major League Baseball.

Legendary baseball owner and manager, Connie Mack, saw the young man's determination and took a chance on the scrappy utility man. Fox signed his first contract at age 16 and started his career in the Pennsylvania Interstate League with Class-B Lancaster. During this stage, Fox was platooned at numerous positions in the outfield and first base, understanding the broad range of talent that would return to the game when the war ended in 1945. He decided to focus on the middle infield, specifically second base. He started the 1946 season with Lancaster and established himself as the top second baseman in the league, while accumulating league bests in runs, hits, triples, put outs, assists and fielding.

Fox's outstanding performance led Mack and the Athletics to purchase his contract in 1946. His season ended before it began due to service in the post WWII military occupation of Korea. In 1947 and 1948, he got brief calls to join the A's, however spent the majority of the seasons with Lancaster and Lincoln of the Class A Western League. In June of 1948, Nellie married Joannne Statler and the couple had two children.

The 1949 season was a spotty display, Fox saw little time in the A's lineup and his future was uncertain. Several weeks after the 1949 season the Philadelphia A's traded him to the Chicago White Sox for catcher Joe Tipton. Nellie would now roam the middle infield at one of the nation's most brilliant ball fields, Comiskey Park.

During the season of 1951, Fox solidified himself as an everyday player for the Chicago White Sox. Maintaining great glove work and improving his batting, Fox finished the season with .313 average and earning his first ever All-Star selection, an honor he would make a habit of over his career.

One of Fox's best seasons of his career was the 1952 campaign where he collected 192 total hits and a .300 average. Noted for his tobacco chewing, hustle, and constant chatter, Fox preserved his reputation of an everyday player. Throughout the early 50s, Nellie was the epitome of second baseman, his sure hands on the diamond and his natural instincts at the plate led to hundreds of hits and very few strike outs. Fox's ability to put the ball in play was a valuable asset to Chicago's lineup. Nellie started to gain more notoriety throughout the league and as a vocal leader of the White Sox and a habitual All-Star.

Chicago did not improve in either the 1953 or 1954 seasons, nevertheless brought forth more passion and desire in the 1955 season. In the off season, Chicago landed future Hall of Fame third baseman George Kell and the season forecast looked promising; however, superior end of the season play by the Yankees ended the Sox's chances for postseason play.

Fox entered the late 1950s as the premiere second baseman in the American League was consistently leading statistical categories every year. Along with his achievements on the field, his status as a professional baseball player grew. Often underestimated due to his 5'8'' build, his small stature and prowess on the field led to his growth in popularity. He soon became a fan favorite across the country, but especially in Chicago.

In 1956, Fox teamed up with his middle infield partner Luis Aparicio and together they would become one of the greatest double play combination in the history of baseball. Rarely has the game seen the fluidness and consistency at the high level of Fox and Aparicio's quickness, glove work, and mechanics. The two also became leaders offensively, providing speed and on base percentage at the top of Chicago's lineup. Even with the addition of Aparicio, the Sox could not break through the American League. The 1956 season again ended in disappointment as the team finished in third place for the fifth consecutive season.

The White Sox had plateaued in the standings and needed a change of scenery. They chose to hire a new manager, Al Lopez. Lopez brought fresh energy to a team that had disappointing fall outs in previous seasons. While the 1957 and '58 seasons brought little joy, they laid the foundation for a White Sox rebirth in 1959. With the Yankees and Indians lacking their usual fire power, the Sox emerged as the dominate American League team and finished with a 94-60 record and finally a chance at the postseason. The 1959 season was bittersweet on many different levels for Nellie Fox; statistically he led the league in doubles and captured the American League MVP award, but the team lost to the Los Angeles Dodgers in the World Series. The Dodgers beat the Sox four games to two.

After the 1959 season, many of the key components to the American League Championship team were traded and Chicago's future looked grim. The White Sox had mediocre years in the early 60s and Fox's abilities were starting to decline. In 1963, Fox was traded to the expansion team the Houston Colt 45's (now the Houston Astros) to occupy the second base position and groom their young talent, especially future Hall of Famer Joe Morgan. For the next eight years, Fox would spend his time as a coach for Houston, spreading his knowledge and reluctant to leave the game he loved. The biggest contribution he made during his time with Houston was the fine work with he did with Morgan, teaching and molding him into one of the best second basemen in history.

In 1968, Fox joined the Washington Senators coaching staff. Washington was closer to his home in Pennsylvania and he enjoyed working with the group of players in Washington. When baseball great Ted Williams took over the team in 1969, Fox was invited to stay on due to the time and progress he had made with the team the previous year. Arguably the greatest player in history, Williams once said of Nellie Fox, "I just loved him. As a person, as an individual, you couldn't possibly not love him." Nellie stayed with the Senators after they relocated to Texas in 1972.

Fox was diagnosed with cancer in 1973 and battled with the terminal illness for two years until his death on December 1, 1975, in Baltimore, Maryland. The leader of the Chicago's Go-Go White Sox, Nellie Fox, collected great admiration from fans and sportswriters alike. Fox once said, "Second base is anything but magic. If it's anything at all, it's speed, sureness with your hands and lots of hard work." In 1985, Fox attained 74.6% of ballots needed to gain entrance into baseball immortality, however fell .4% short of the required 75% needed for enshrinement. Nellie Fox would have to wait another 12 years, until 1997, before his peers in the Veteran's Committee would elect him into the National Baseball Hall of Fame in 1997.