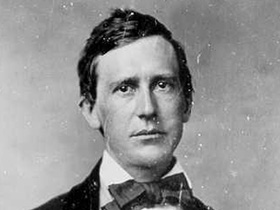 Pittsburgh's Stephen Collins Foster wrote the majority of the most famous American songs of the 19th century.

Stephen C. Foster, famed writer of classic American songs including "Oh, Susanna" and "Beautiful Dreamer," was born in Pittsburgh in 1826. Having received an excellent education, Foster embarked on a historically-significant but financially-dismal career. He died at the age of 37 in New York City.

Stephen Foster was born in Pittsburgh, Pennsylvania, on July 4, 1826. His parents were William Barclay Foster, merchant and trader, and Eliza Clayland Foster. Foster's parents were not musical, yet one of his first musical influences was his sister, Charlotte Susanna Foster, who played the piano and sang songs about loss and love. In 1850, Foster married Jane Denny McDowell, with whom he had one child. The couple separated more than once, and he lived his last three years alone.

Foster attended private academies in Allegheny, Athens, and Towanda. At these academies, he received an education in English grammar, diction, the classics, penmanship, Latin and Greek, and mathematics. Foster's first composed song was "Tioga Waltz," and he composed it when he was 14-years-old. Three years later, he set music to the poem "Open Thy Lattice, Love," by George Pope Morris, and a Baltimore firm published it.

In a time when songwriters predominately wrote negatively about African Americans, Foster was different. He knew other songwriters' works were offensive, and instead he wrote many songs portraying African Americans as others did not portray them. "Nelly Was a Lady," published in 1849, turned out to be one of the first songs composed by a white author that depicted a faithful married African American couple, and the first to call the wife a lady, non-sardonically.

Even though Foster's music is now an integral part of our American musical heritage, Foster himself did not earn much from it while he was alive. Of his 286 known hymns, piano pieces, and songs, the majority of them earned him little money, and his average annual income throughout his songwriting career was under $1,400.

Foster spent the last years of his life in New York City until he suffered from a recurring, undiagnosed fever, and then a fall in his hotel room that gashed his head. He died in Bellevue Hospital on January 13, 1864, at the age of 37.