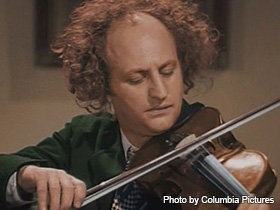 One of the Three Stooges, Larry Fine spent a lifetime as a comedic actor.

Larry Fine was born on October 5, 1902, in Philadelphia. He had many skills as a child including playing the violin and boxing. As he grew older, Fine decided he wanted to be a comedian. He got his big break in 1925 when he was asked to join a trio with Moe and Shemp that would eventually turn into The Three Stooges. Fine had a successful career in full length and short films, many of which are still famous today, alongside his fellow Stooges. His career ended in 1970 when he suffered a stroke. He died on January 24, 1975, in Woodland Hills, California.

Larry Fine was born Louis Feinberg on October 5, 1902, on the corner of Third and South Streets in Philadelphia. His parents, Joseph and Fanny Feinberg, owned a watch repair and jewelry shop. Fine was the first of four children to come into the Feinberg family. He had two brothers, Morris and a younger brother, Philip, who died prematurely, and a sister, Lyla. At a young age, Fine badly burned his left arm with acid his father used in his jewelry store. Immediate medical attention was required and a skin graft was done on Fine's arm. After surgery, doctors recommended that Fine start violin lessons as a form of therapy. The action of playing violin would help strengthen damaged arm muscles. Little did the doctors know, Fine would discover a natural music talent hiding inside. His skill grew quickly and he began playing at local theatre amateur nights and winning. He eventually began playing professionally. At age 10, Fine soloed at a children's concert at the Roseland Dance Hall in Philadelphia.

However, the violin was not Fine's only skill. He also boxed in the lightweight division. He fought over 40 bouts and earned extra money by winning. In his teens, Fine aspired to become a comedian. He enjoyed putting on shows for whoever would watch. In 1921, after graduating from Central High School, Fine landed a job in Gus Edwards' Newsboy Sextette playing violin, dancing and telling jokes in a Jewish dialect alongside others. One of his coworkers was Mabel Haney. Fine worked alongside Haney for four years and eventually married her in 1927. Fine was first asked to become a Stooge during a show in Chicago in 1925 at a night club called Rainbow Gardens. Ted Healy, Moe, and Shemp Howard were watching the performances of the night when Shemp informed Healy he planned to leave the act soon. Moe suggested that Fine could be a possible replacement. All three men agreed and after the show, the trio went backstage to meet Fine. Healy offered Fine $90 a week to become a stooge and an extra $10 a week if he'd throw away his violin. After hearing the offer, Fine stated, "For $100, I'll forget everything." Fine accepted the offer and "The Three Stooges" were in the beginning stages of forming.

The trio Moe, Larry, andShemp first opened on Broadway in "A Night in Venice" and later appeared in their first full length movie, 20th Century Fox's comedy Soup to Nuts in 1930. The trio continued to do work together until the early 1930s when Shemp left the group. The group needed a third member so Moe suggested his youngest brother Jerry. Healy took one look at Jerry, who had long red locks and facial hair, and decided he did not have the look that Moe and Larry had. Jerry came back a few months later with a shaved head and was hired as the famous third Stooge, Curly. Around the same time, in 1934, the Stooges left MGM and went on to work for Columbia Pictures where the team spent 24 years. Fine played the middle Stooge known for his receding hairline and unkempt hair. He acted as the straight man to the other, more "extreme" Stooges and generally provided the voice of reason.

Fine's life outside of the Three Stooges was as eccentric as the group's films. Fine and his wife Mable lived in hotels for most of their lives. They first lived in the President Hotel in Atlantic City where their daughter Phyllis was raised. However, they moved to the Knickerbocker Hotel in Hollywood some years later to be among stars. Fine had two children; however, his son Johnny died in a tragic car accident on November 17, 1961, at age 24. Fine was often seen as a social butterfly offstage. He enjoyed throwing lavish parties for friends and even had an annual Christmas midnight supper that was nothing short of extravagant. Fine's easy-going nature carried over into the world of finance. He was a terrible businessman and spent a majority of his money as soon as he earned it. He enjoyed gambling at the horse tracks or at a high-stakes gin rummy game. This habit almost forced him into bankruptcy when Columbia terminated the Three Stooges comedies in 1958. Along with finance, Fine had a problem showing up to work on time. He often got in trouble for showing up late to interviews and other promotional events along with movie and television sets. Many felt that Fine was not as dedicated to his career as the other Stooges.

Fine's career as a Stooge continued after being dropped by Columbia in 1958 and he and the other two Stooges performed before live audiences all across the United States. They also appeared in six more full length motion pictures, appeared on numerous television shows, and performed in other productions. However, Fine suffered a stroke in 1970 and subsequently never performed again. During Fine's 40 year film career, he only appeared in one film that did not also feature fellow Stooge Moe Howard. Beginning in 1933, Fine appeared in more than 218 short films along side the other Stooges.

After retirement, Fine lived alone in a house he bought in the Los Angeles area. Mabel Fine died May 30, 1967 before her husband retired. Fine eventually moved into an industry retirement community in Woodland Hills, California called Motion Picture House after suffering a series of paralyzing strokes. Fine died on January 24, 1975 of a cerebral hemorrhage. The Three Stooges are still a part of society. The trio have their own star on the Hollywood Walk of Fame for their contributions to Motion Pictures. The star is located at 1560 N. Vine Street in Hollywood. Larry Fine has also been honored in his hometown of Philadelphia. The building where Fine was born has been converted into a restaurant and a small Three Stooges museum. A large mural, approximately 20 feet high, of Fine was also painted on the side of the building in 1999 to honor the middle Stooge.