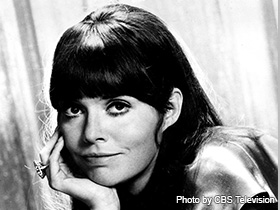 Actress Barbara Feldon was born in Bethel Park in 1941. She graduated from the Carnegie Institute of Technology in 1955 and worked as a model and actor in New York City. She became best known for her role as Agent 99 on the hit 1960s TV series Get Smart. Her memoir, Living Alone and Loving It: A Guide to Relishing the Solo Life, was released in 2003. She currently resides in New York City.

Barbara Hall was born on March 12, 1933 in Bethel Park, a suburb of Pittsburgh. She was near-sighted as a young woman, and attributed her notable alluring stare to poor vision. She earned a Bachelor of Arts degree in drama from the Carnegie Institute of Technology (now Carnegie Melon University) in 1955. After a 1957 move to New York City to pursue her acting career, she won the grand prize on the game show The $64,000 Question, on a question about William Shakespeare. She immediately used the money to open an art gallery with a friend, photographer and artist's representative Lucien Feldon. Barbara and Lucien got married shortly after, in 1958.

Feldon first became known for her starring role in a commercial for "Top Brass," a hair product for men. The commercial featured her lying on a stuffed tiger and purring that she only liked "tigers: men who use Top Brass." This commercial caught the eye of Leonard Stern, who was setting up a spy spoof show called Get Smart. Stern called it a "very sensual performance," and was quickly convinced that Feldon ought to play the leading female role for the show.

Get Smart was conceived as a satire on the spy genre, taking cues from what producer Daniel Melnick called "the two biggest things in the entertainment world today"—James Bond and The Pink Panther's Inspector Clouseau. It began its run on NBC in 1965. Don Adams starred as the bumbling secret agent Maxwell Smart. Feldon played Agent 99, Smart's partner who bailed him out of sticky situations and eventually fell in love with him. When Adams first met Feldon, he was put off by Feldon's height advantage over him. Feldon agreed to slouch or go barefoot so as not to diminish the title role. On Agent 99's noticeable posture in the series, Feldon told the Archive of American Television that "Don would have liked a shorter leading lady, and I wanted to please my co-star."

In 1967, Barbara and Lucien Feldon divorced. Barbara kept the last name since she had become a household name, due to the popularity of Get Smart. Feldon started dating Get Smart producer Burt Nodella in 1968. Although Feldon's 1965 contract for the show was only for three seasons, Feldon "couldn't imagine anyone else using [her] number" and signed a two-year extension in 1968. She remained in the show until its final season in 1970. Of all of the Get Smart episodes, Feldon considers "The Impossible Mission" her favorite because of the costumes and romance.

Although her acting career slowed down significantly since Get Smart, Feldon continued to do voiceovers for commercials and guest star on TV shows. She played Ted Danson's valentine in the 1991 Cheers episode "Sam Time Next Year," and paid an homage to Agent 99 with the role of "Diane 'Spy Girl' Caldwell," in the 1993 Mad About You episode "The Spy Who Loved Me." She also played a fanatic beauty contest winner in the 1975 satirical film Smile.

Feldon also hosted an entertainment news show called Special Edition in 1977. In 1989, Feldon costarred in an ABC made-for-TV movie, Get Smart Again, opposite Don Adams. A short-lived attempt at a remake of Get Smart by the same name aired in 1995 in which Feldon appeared in five episodes opposite Andy Dick. The Fox Network series was not received well and lasted only seven episodes.

In 2003, Feldon released a memoir, entitled Living Alone and Loving It: A Guide to Relishing the Solo Life. The book detailed her divorce with Lucien Feldon, the end of her long relationship with Burt Nodella in 1979, and her single life afterwards. Feldon's struggles and triumphs in finding peace in a single lifestyle ultimately encouraged readers to stop seeing single life as inferior to marriage, and to "stop believing that marriage is the solution to loneliness."

In 2007, Feldon was featured in a book by Charles Grodin entitled If I Only Knew Then... The book features various influential figures' stories about their biggest regret and what they learned from the experience. Ms. Feldon's biggest regret was putting off thanking her sixth grade teacher for influencing her so greatly.

For an actress known for only one major role, Feldon has received much popular and critical recognition. In 1968 and 1969 Feldon was nominated for an Emmy for "Outstanding Continued Performance by an Actress in a Leading Role in a Comedy Series." The 2004 TV Land Hall of Fame awards named Feldon the "Most Stylish Secret Agent." In a 1983 interview with Toby Kahn, Feldon said"There's not a day when somebody doesn't smile and say, 'Oh, you're Agent 99.'" As she tells the Archive of American Television, "It just makes the day sunnier. It's like if we were just more polite to each other and smiled to each other more, without recognizing each other from television, how much sweeter life would be, wouldn't it?"