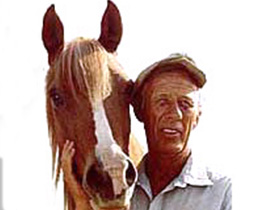 Walter Farley, author of The Black Stallion (1941), was raised in Mercersburg.

Walter Farley was born in New York in 1915. His love of horses inspired his first and well-known book, The Black Stallion (1941). Many other books about the stallion followed, and eventually The Black Stallion was made into a film. Walter Farley's books continue to be celebrated long after his death in 1989.

Walter Farley was born in Syracuse, New York, on June 26, 1915. His parents were Walter Farley, an assistant manager of a hotel, and Isabell (Vermilyea) Farley. Farley's love for horses began when he was only a small child. He desperately wished for a pony. He even tried to win one by selling subscriptions. His wish came true when his uncle moved to Syracuse with his show horses.

Farley's love for horses inspired him to begin writing The Black Stallion (1941) while attending Erasmus Hall High School in Brooklyn. He rewrote it several times while he was there and also while attending the Mercersburg Academy in Pennsylvania. Farley completed the book in 1941 before graduating from Columbia University, and it was quickly picked up and published by Random House while he was an 18-year-old undergraduate. After receiving his advance, Farley took a year off to travel, but his vacation was cut short due to World War II. Farley signed up and was trained for the Fourth Armored Division of the United States Army, and spent much of his time writing as a reporter for the army publication Yank.

While active in the army for four years from 1942-1946: he received his first award, the Pacific Northwest Library Association's Young Reader's Choice Award (1944), for The Black Stallion and he also married Rosemary Lutz, a model in New York City, in 1945. The two later had four children: Pamela, Alice, Steve, and Tim. The family split their time between a Pennsylvania farm and a Florida beach house. At age 20, Farley's daughter Pam was killed in a car crash in Europe (1968). In remembrance of her, he wrote The Black Stallion and the Girl (1971).

Walter Farley wrote a total of 34 books, many of them about horses. Over 12 million copies of his books have been sold in the United States, and his titles have been in print in over 15 countries. One of his lifelong dreams came true in 1979 when The Black Stallion was released on the big screen as a film of the same name. In 1989, Farley wrote his last book, The Young Black Stallion, a prequel to his first.

As a tribute to his many successes and community contributions, Farley was honored with the opening of the Walter Farley Literary Landmark by the Friends of the Venice Public Library in Venice, Florida, in 1989. On October 16, 1989, Walter Farley died of heart failure at the age of 73. Today, his son Tim continues his father's legacy with Black Stallion celebrations, events, community forums, online content for educators and fans, and literacy initiatives.